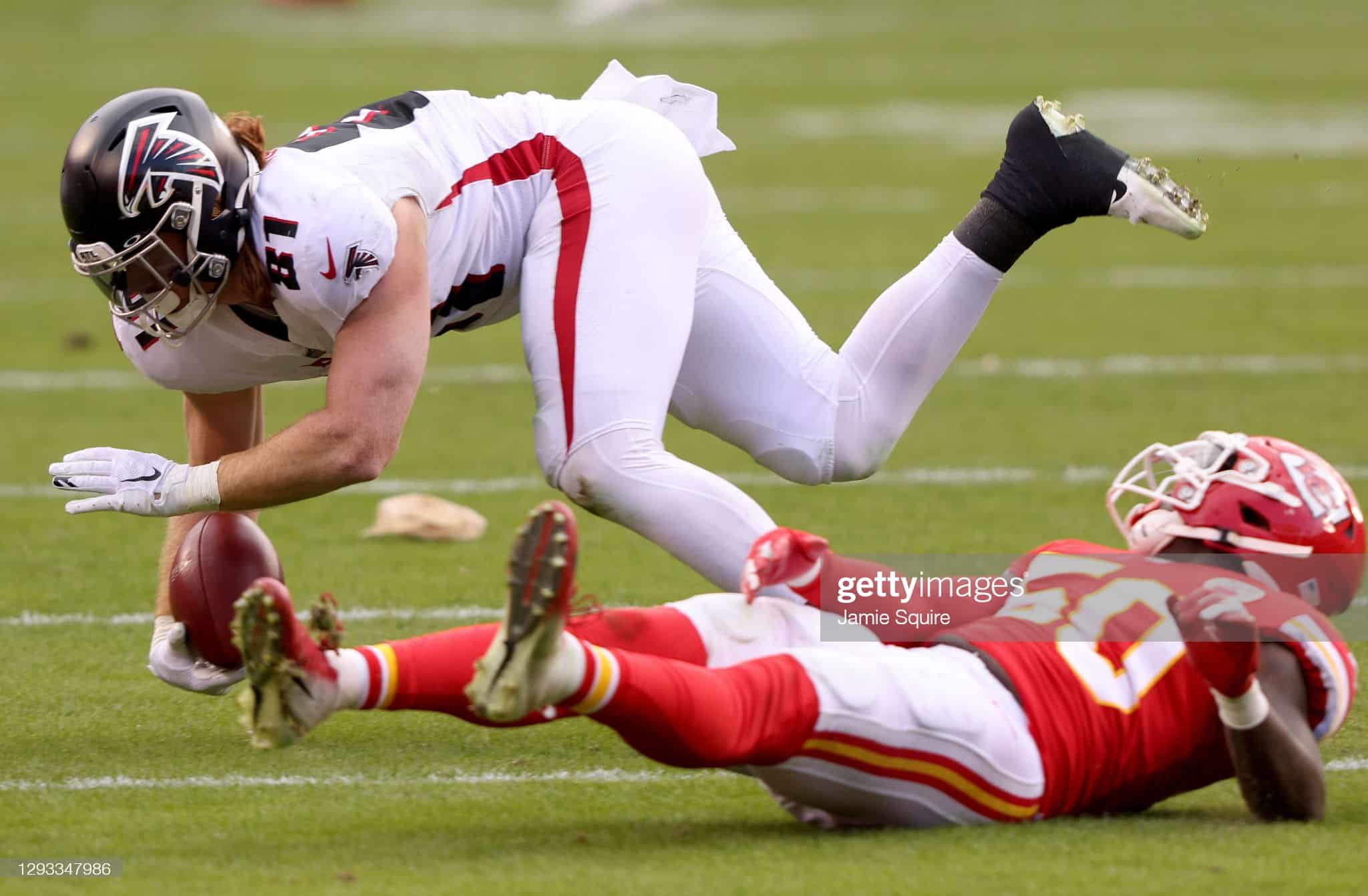 Yes Virginia, there is Week 17 fantasy football! I know, I know, most of you don’t care for and don’t play Week 17, but thank you for reading anway.

Regardless, we are not here to debate Week 17, and as opposed to most weeks so far, almost all, if not all of these, are very deep dives. A lot can change between now and the start of games on Sunday (all are on Sunday this week remember), so check inactives and starters before setting those final lineups this year!

EAST RUTHERFORD, NEW JERSEY – DECEMBER 27: David Njoku #85 of the Cleveland Browns is tackled by Bryce Hager #58 of the New York Jets in the second quarter at MetLife Stadium on December 27, 2020 in East Rutherford, New Jersey. (Photo by Sarah Stier/Getty Images)

An undrafted free agent after the 2020 NFL Draft, Lynch played all over the field for Baylor in college (five different positions in fact). In his third NFL game (Week 16), Lynch had a 96% snap share starting at linebacker. He ended the game with 7 solos and 3 assists. Lynch starting again in contingent on a lot of other injuries, but with the season lost in Minnesota, I’m banking on the Vikings wanting to see more of what they have in Lynch.

He was on here earlier in the year, and likely won’t find him on dynasty waiver wires, but Gay had a season high 72% snap share last week and ended with 7 solos, 2 assists, 1 TFL and 1 forced fumble. With the Chiefs having the #1 seed locked up, and many starters already hurt, look for Willie to have another big chance to showcase his skills for a 2021 starting role.

With Harvey Langi on IR, Hager got the start a produced. With a 90% snap share he ended with 5 solos, 5 assists, 1 TFL and 1 PD. Week 17 brings the Patriots, who give up the 3rd most points to opposing linebackers. For a free waiver wire pickup, he’s a decent start this week.

Starting for the Raiders this week for the first time this year, McMillan ended with 6 solos, 3 assists and 1 TFL. This is after having a 42% snap share with 2 solos, 3 assists and 1 forced fumble in Week 15. Denver in Week 17 is not a great matchup (7th fewest), but with McMillan an unrestricted free agent after this season it appears the Raiders are seeing what they have him in at the end of this year, which works for us.

INGLEWOOD, CALIFORNIA – NOVEMBER 22: Jamison Crowder #82 of the New York Jets is tackled by Jahleel Addae #36 of the Los Angeles Chargers during the first half at SoFi Stadium on November 22, 2020 in Inglewood, California. (Photo by Kevork Djansezian/Getty Images)

Moore has started the past six weeks for the 49ers, and during that time he has 22 solos, 13 assists, 1 TFL and one forced fumble on nearly 100% playing time. Seattle does not give up a lot of points to opposing safeties (5th fewest), but Moore is unowned in most leagues and in Week 17, sometimes a nice floor is what you need.

Starter Rayshawn Jenkins went out in Week 16 with an ankle injury. Long time Charger and sometimes starter Jahleel came in and played 94% of the snaps and ended with 4 solos, 5 assists, 1 PD and .5 sack. If Rayshawn is out, he is a veteran that knows the system and should get you decent production.

Another Moore and another not amazing option, but Moore is starting for the Texans in Week 17 again. He was a surprise start in Week 16 after starter Eric Murray went on the COVID list after testing positive hours before the game’s start. In that game Moore played 100% of the snaps (his previous high was 78% in Week 15) and had 2 solos and 1 assist. Just beware, Tennessee isn’t a great matchup (4th fewest points to safeties).

The past two weeks Averett has had a 100% snap share, and in those two weeks he has 6 solos, 2 assists and 3 PD. In a must win game in Week 17, the Ravens face the Bengals who currently give up the most points to opposing cornerbacks.

ARLINGTON, TEXAS – DECEMBER 27: Jalen Hurts #2 of the Philadelphia Eagles is tackled by Randy Gregory #94 of the Dallas Cowboys in the first quarter at AT&T Stadium on December 27, 2020 in Arlington, Texas. (Photo by Ronald Martinez/Getty Images)

The Eagles play Washington in Week 17, in the last regular season game of the year. Washington gives up the 3rd most points to opposing defensive ends, and Curry had his highest snap share (70%) of the season in Week 16 against Dallas once Fletcher Cox went out. Curry ended with 2 solos, 1 TFL and 1 sack. No matter who is behind center for Washington (we know it won’t be Haskins or Allen), this is a good matchup to try and take advantage of.

Payne has been on fire lately with teams focusing more on the other talented members of Washington’s defensive line. Make no mistake though, Payne has plenty of talent. Week 17 brings Philadelphia, who give up the 17th most points to opposing defensive tackles. In the past four week he has 2 sacks, 9 solos, 6 assists, 4 TFL, 1 INT, 3 PD, 1 forced and 1 recovered fumble with an 87% snap share. I like Payne to continue his hot streak this week.

The Giants give up the 10th most points to opposing defensive ends, and no matter how much this Dallas fan hopes the Cowboys don’t win the division to get embarrassed in the playoffs, the Cowboys clearly want to win and make the playoffs. Gregory has been playing well in limited time for Dallas since returning to regular playing time and the team in Week 8 (he played 6 snaps in Week 7). In those 8 games he only has a 44% snap share, but has 3.5 sacks, 15 solos, 5 assists, 4 TFL, 1 PD, 5 forced fumbles and 1 fumble recovery.

Stephen has not done a lot this year; in 15 games he has 20 solos, 13 assists, 2 TFL and .5 sack. This week though he has a good matchup in Detroit (8th most points to opposing defensive tackles).

I cannot imagine Detroit will play Stafford (and who will be hobbled if they do based on his last appearance). The last time these teams played Shamar had two assists and .5 sack on a 49% snap share, but since that game he has averaged a 66.43% snap share. I think he improves on that this game.

You catch all our video content on YouTube. Be sure to subscribe and click the notification bell to ensure that you don’t miss any of our other great content. We have free IDP Rankings over on RotoHeat.com, and you can catch our IDP-Specific podcast on most podcatchers! You can also find me on Twitter.