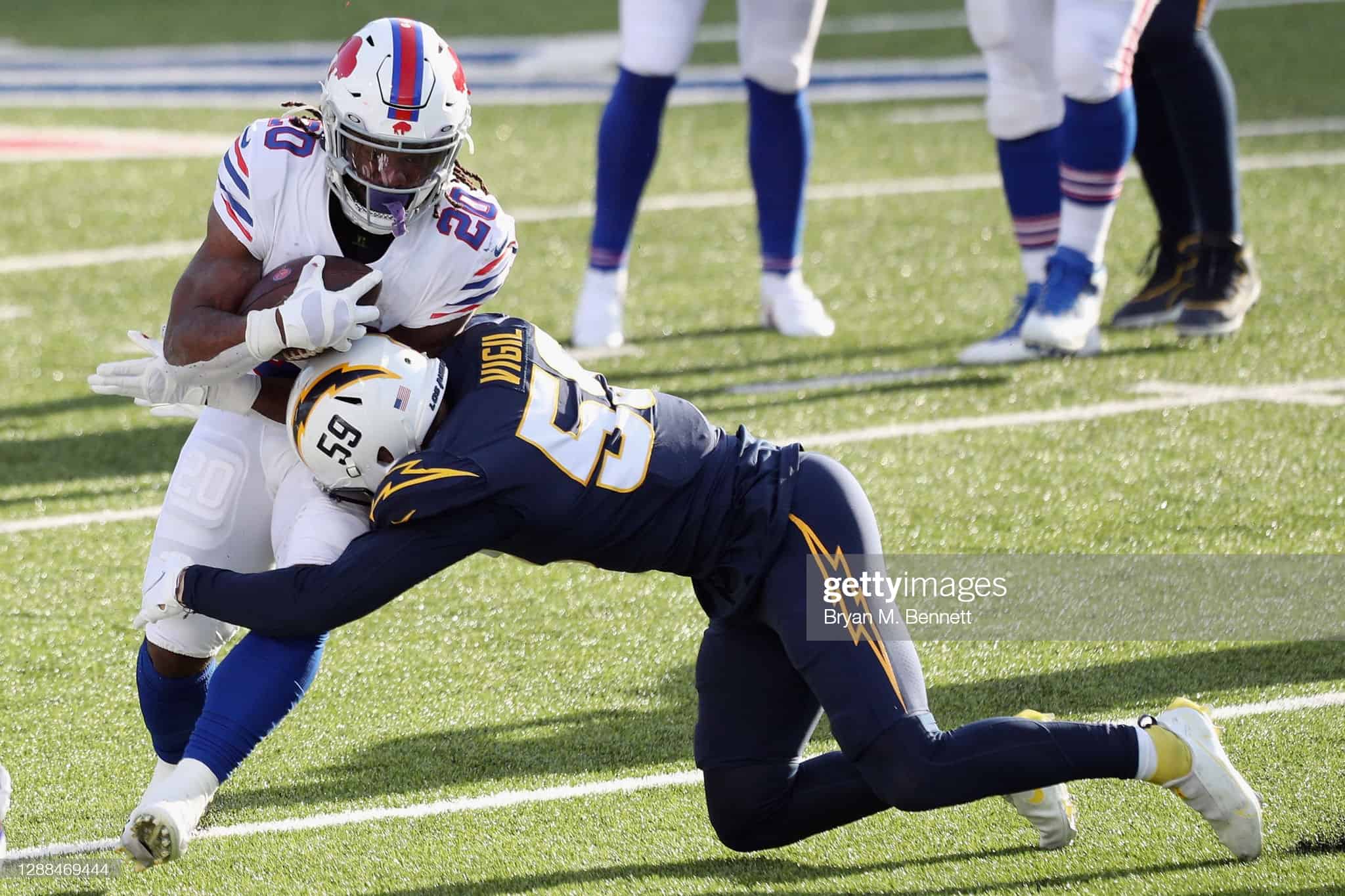 For most of you it is your championship week. For a small group of you, it is your semifinals. In either case, you likely do not need to add someone to your squad, but if you do, we have your back. And don’t worry, for you noble, brave Week 17 players we will be back for you then too! Good luck if you are playing yet, I hope you make all the correct sit/start decisions this week!

ARLINGTON, TEXAS – OCTOBER 19: Andy Dalton #14 of the Dallas Cowboys gets rid of the ball before being sacked in the end zone by Dennis Gardeck #45 of the Arizona Cardinals during the first quarter at AT&T Stadium on October 19, 2020, in Arlington, Texas. (Photo by Ronald Martinez/Getty Images)

Over the past four games Vigil has 19 solos, 13 assists, 3 TFL, 1 forced fumble and 1 sack on just a 64% snap share. Denver in Week 15 is not a great match-up for fantasy linebackers (8th fewest points allowed), but neither was Vegas (5th fewest allowed) in Week 15. In that game, Vigil had 6 solos, 3 assists, 1 TFL and 1 sack last week. Kyzir White does not seem all the way back from time off on the COVID list, and while Vigil is generally nothing to right home about for a fantasy linebacker, riding the hot hand can be what you need sometimes.

Hudson started with Cole Holcomb out and did decently (4 solos, 5 assists and 1 TFL on just 49% snap share), so this another play contingent on someone not playing. If he is able to play next week, I wouldn’t consider Hudson at all. The Panthers give up the 13th most points to opposing linebackers, so it is a decent matchup, but even if Cole is out Hudson is a deep league only add.

Talk about riding the hot hand, here is a big example. In limited time Gardeck has been playing great. The past three weeks he only has a 16.33% snap share, but has 5 sacks, 8 solos, 5 TFL and 1 fumble recovery. Week 16 brings the 49ers to face the Cardinals, and the 49ers give up 6th most points to opposing linebackers and plenty of pressure with Mullens at QB. This is a low floor high upside play, but sometimes that is what you need in Week 16.

Yes he may have been on here twice already. Yes he is still under owned. And yes as a Cowboys fan I get to put him on here again. The Eagles give up the 12th most points to opposing safeties. Wilson had 5 solos, 1 sack,1 forced fumble and 1 fumble recovery when they played in Week 8. The past five games he has played he has had 16, 3, 18, 9.55 and 14 points in our scoring system. Start him with confidence again this week.

If you haven’t read Randy Johnson’s latest article, go do that now (and then come back to this). Wilson is in there, and he also fits well here this week. He has an 89% snap share for the year, and

Week 15 saw him get 10 solos on 100% of snaps against Baltimore, who are the 7th worst in terms of points allowed to opposing safeties. His Week 16 matchup on the other hand, the Bears, give up the 3rd most points to opposing safeties. If you are stretching to find someone from waivers to play this week, he’s a great option.

This is a follow-up on last week as he was there too, but we have more clarity with what the Eagles are doing with their injury riddled secondary. Epps got 100% playing time Week 15 against Arizona and had 7 solos, 2 PD and 1 INT. Week 16 brings Dallas, and while they are not the greatest in terms of points to opposing safeties (17th worst), this looks like another high scoring game and plenty of opportunities for both secondaries.

Another playing within Randy’s article Herndon is in there for good reason. Since Week 9 (the week after their bye) he has averaged an 87% snapshare, with the past three weeks at 100%. Since their bye, he has had 34 solos, 8 assists, 4 TFL and 1 sack.

Week 15 was not great, he only had 2 solos and 1 assist, but that was against Baltimore, who give up the fewest points to opposing cornerbacks. Week 16 brings the Bears, who give up the 5th most points to them. Herndon has been producing, getting playing time and has a great match-up.

ATLANTA, GEORGIA – OCTOBER 11: Matt Ryan #2 of the Atlanta Falcons escapes the pocket away from Derrick Brown #95 of the Carolina Panthers during the first half at Mercedes-Benz Stadium on October 11, 2020 in Atlanta, Georgia. (Photo by Kevin C. Cox/Getty Images)

The Rams plays the Seahawks in Week 16, and Seattle gives up A LOT of pressure. He has the second most pressures this year as a QB, and has been sacked 40 times. Fox (36% snap share) won’t get you much if he doesn’t get a sack or TFL, but he has 6 TL and 5 sacks on the year, including 2 sacks and 2 TFL the past two games. In Week 10 when they met, he had 1 solos and 1 TFL. He won’t have a huge game for you, and is a gamble like a lot of these guys, but some upside at low cost is there.

From Week 9 on, the past 7 games for Wolfe, he has 13 solos, 19 assists, 4 TFL, 1 fumble recovery and 1 sack and a 75% snap share. He won’t get you a ton, but if you need a relatively safe floor, for a waiver claim this late in the year he isn’t a bad option. They play the Giants, who give up the 11th most points to opposing defensive ends, so it is a nice match-up for him.

The Texans play the Bengals, who give up the 2nd most points to opposing defensive ends. The past four games he has a 59% snap share opposite JJ Watt, and 4 solos, 3 assists, 2 TFL and 1 sack. Now that isn’t great for an overall line, but the matchups have not been great. Given the match-up and what he has showed in terms of being able to get pressure (he does have another 4 QB hits), he’s a decent start if you have to.

He’s probably owned in dynasty leagues, and even more likely in IL/DT required or premium leagues. That said, the past three weeks he an 81.67% snap share, 5 solos, 2 assists, 2 TFL and 2 sacks. Week 16 brings Washington, who do not give up a ton of points to opposing defensive tackles. With Haskins playing however, they have been giving up more pressure than normal, so I feel that he is a decent play this week.

You catch NFL Week 16 Offensive Waiver Wire Adds and all our other video content on YouTube. Be sure to subscribe and click the notification bell to ensure that you don’t miss any of our other great content. We have free IDP Rankings over on RotoHeat.com, and you can catch our IDP-Specific podcast on most podcatchers! You can also find me on Twitter.