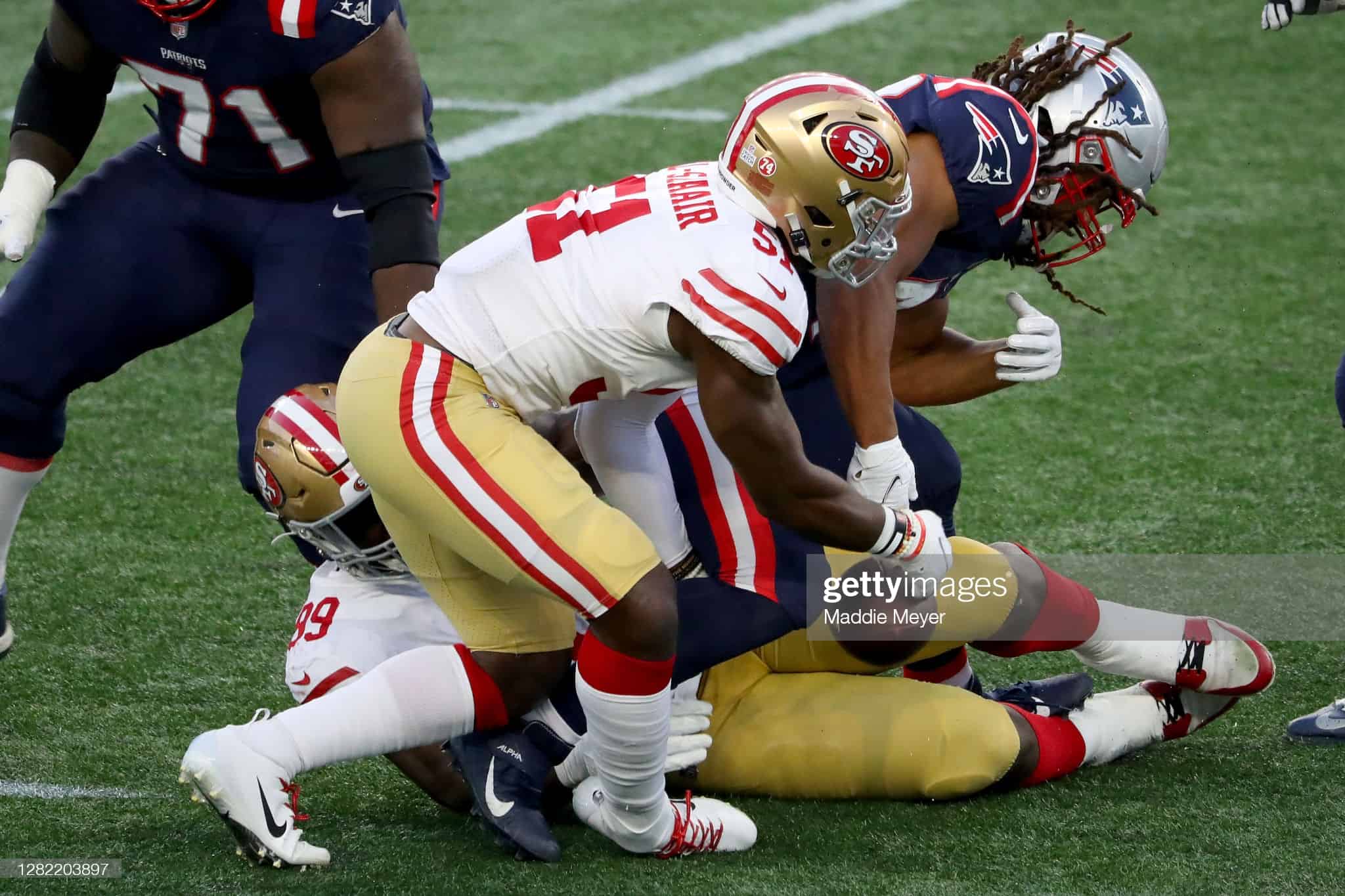 In any case, thanks for reading! We keep having to dig deeper to just not do a repeat of names each week, and as the season winds down you will see many players you might not know much about. That is ok though, as we are here to learn, and hopefully win some games yet this year!

PITTSBURGH, PA – DECEMBER 08: Avery Williamson #51 of the Pittsburgh Steelers in action against the Washington Football Team on December 8, 2020 at Heinz Field in Pittsburgh, Pennsylvania. (Photo by Justin K. Aller/Getty Images)

With apologies to Azeez, I was not aware of him until this week. Azeez came in to replace Fred Warner, who left to be checked for a concussion, and then also for a shoulder stinger. Through a 57% snap share Azeez ended with 4 solos and 1 assist. This is contingent on Warner’s health of course, but if Warner does not play, Week 15 brings Dallas, who give up the 8th most points to opposing linebackers. With the 49ers out of the playoff picture they may not want to risk things with Warner, so I’d think Azeez has a good shot at starting this week.

In most competitive, larger IDP leagues Williamson should be owned. If not, you need to get get him. Week 14 saw him get a 89% snap share with the Steelers, his highest since being traded there. This was mainly due to Vince Williams being put on Injured Reserve/COVID-19 list, and Robert Spillane going on IR with a knee injury.

Starting in Week 14, Williamson had 9 solos and 2 assists. If you check out Williams’ Twitter it doesn’t sound like he will be back any time soon, so Williamson should continue to be the main guy in the middle for the rest of the regular season. Week 15 brings the Bengals, who give up the 15th most points to opposing linebackers.

Two Eagles linebackers played 90% or more in Week 14. Alex Singleton was one, and Duke was the other. He ended the game with 5 solos, 1 assist, 1 PD and 1 INT. Looking at prior games, this may be due to TJ Edwards being inactive, so keep an eye on that before deploying Riley into lineups. Even if he starts, Riley isn’t a high end starter, more of a low end LB2 ceiling, but if that is what you need or are seeking a desperation play in a deeper league.

The past three weeks Coughlin has gone from 39% to 64% to 81% playing time. Week 14 against the Cardinals, who give up the 11th fewest points to opposing linebackers, he had 5 solos, 2 assists and 1 TFL. Week 15 brings the Browns, who love to run the ball and give up the 17th most points to opposing linebackers. You will get sick of reading to check if a starter sits with some of these, but given the time of the year, this is where we find ourselves. For this one, check to see if Blake Martinez is back for Week 15 before starting Coughlin, but if Blake sits, Coughlin is a decent start.

Johnson has mainly been a cornerback, but has been getting playing time at safety, and with Justin Reid out for the rest of the year, Johnson is expected to take over for him. Johnson ended up with 72% of the snaps and 5 solos with 1 assist. The Colts are a nice match-up, as they give up the 4th most points to opposing safeties. If you get cornerback scoring in a premium league, and Johnson does start at safety, he is an even better start there.

Starting free safety Rodney McLeod unfortunately tore his ACL in the Week 14 game against the Saints. With the other injuries we will get to in a couple players Wallace ended up playing 44% of the defensive snaps at free safety (he recorded no stats however). When Jalen Mills (starting strong safety) moved to cornerback, Marcus Epps ended with a 56% defensive snap share and two solo tackles.

There is a lot to sort out in this secondary, so keep an eye on it as the week progresses. Epps’ starting hinges on where Mills plays mainly next week, and Wallace seems like the likely free safety starter with McLeod now out. Arizona is a decent Week 15 match-up, as they give up the 14th most points to opposing safeties.

Something we see too often in IDP leagues is the dual or different designations, and it raises its ugly head again this week. Yahoo has him as a safety, Fleaflicker has him as a cornerback, and I cornerback is what is on most sites. In any case Sneed was playing a lot (93% and 99% snap share Weeks 1 and 2) to start the year before breaking his collarbone in Week 3.

The past few weeks he has been working his way back onto the field, and the past two weeks he has been over 70%, with has 11 solos and 2 assists in that time. The Saints do not give up a ton of points to opposing cornerbacks (2nd worst) but the Saints are going to have to throw to keep up with the Chiefs.

Darius Slay and Avonte Maddox went out with a head and knee injury, respectively, and then nickel corner Nickell ended with an 87% snap in Week 14 as a result. He ended the game with 5 solos and 1 TFL, and Week 15 brings Arizona, who give up the 10th most points to opposing cornerbacks. If Nickell is forced to start this week, I like him a lot as a cornerback play.

The Rams defense is playing very well lately, and they get the dumpster fire Jets up in Week 15. The Jets give up the 14th most points to opposing defensive ends. Brockers has been all over the place this year, and isn’t someone to rely on regularly, like he may have been a few years ago. I like the match-up though, and he’s coming off his best game of the year (3 solos, 2 assists, 2 TFL and 2 sacks) despite only a 54% snap share that game.

A name we mentioned weeks ago, but Dion has been playing well the past two weeks; 2 solos, 1 assist, 1 TFL, 1 sack and 1 forced fumble win Week 13, and then 1 solos, 2 assists, 1 TFL and 1 sack in Week 14. Week 13 he did it on a 48% snap share, and Week 14 he was up to 78%. Week 15 now brings the Dallas Cowboys and their offensive line mess, which gives up the 4th most points to opposing defensive ends. This will give Dion a great chance to continue his hot streak as he tries to resurrect his career.

The allow quite a few points to opposing defensive lineman this year, and Taysom Hill has been sacked 13 times in four starts this year. Danna has seen his playing time steadily tick up from 22% in Week 11 to 39% in Week 14. Now yeah, this isn’t huge, but seeing increased playing time is good, and his production has been ok as well (7 solos, 6 assists, 3TFL and 1.5 sacks) the past four weeks. The Saints give up the 9th most points to opposing defensive ends, so the match-up is there. If you are still playing for something this year you probably have a better option, but if not, take a look at him.

*Please note: Not that it is an amazing, secret play as is, but it goes down in viability for me if Drew Brees plays, as he was not sacked at nearly the rate Hill has been this year. In 9 games starting, Brees was sacked 19 times. If Jameis plays for some reason over Hill and Brees does not play, I’m fine using him as a dart throw as Jameis, last we saw of him, took quite a few sacks himself (and I don’t mean sacks of crab legs).

Another player from Randy Johnson’s article the other week, over the past four weeks he has 19 solos, 18 assists, 5 TFL, 2 sacks, 2 PD and 1 forced fumble. Week 15 brings the Rams who give up the 9th most points to opposing defensive linemen. Folorunso only has a 50% snap share in those games, so there is some bust potential, but given what he has been able to do with that playing time, I like suiting him up in DT required leagues.

You catch NFL Week 15 Offensive Waiver Wire Adds and all our other video content on YouTube. Be sure to subscribe and click the notification bell to ensure that you don’t miss any of our other great content. We have free IDP Rankings over on RotoHeat.com, and you can catch our IDP-Specific podcast on most podcatchers! You can also find me on Twitter.

Dynasty Battles: Darren Waller or Mark Andrews in 2021 and Beyond?