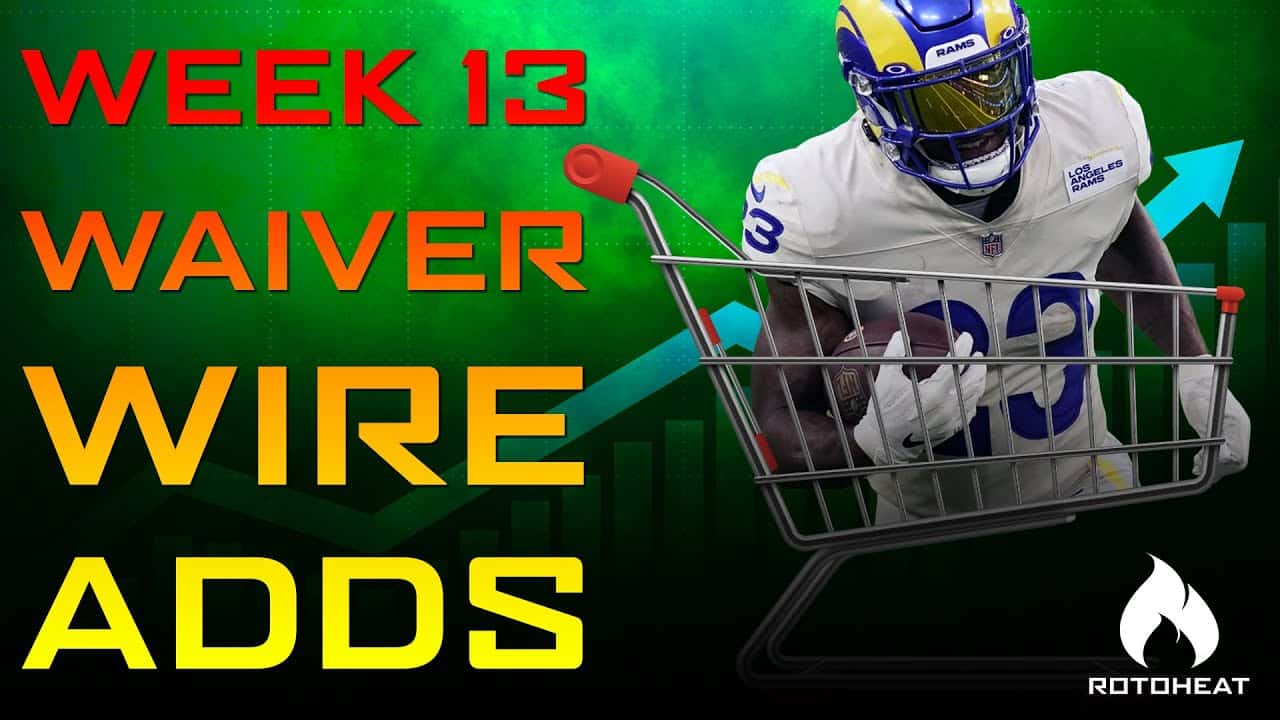 Each and every week in Fantasy Football there are surprise performances and there are injures. Both of these occurrences tend to lead to opportunity, and opportunity leads to touches, and touches lead to fantasy points. Every week there is something to pay attention to in the NFL. At times it is injuries, others it’s bye weeks, and in 2020, the possibility that the Covid-19 pandemic will impact NFL teams all prove that the need for the waiver wire is not going away.

In Week 13, we are back to the bye weeks with Carolina and Tampa getting the week off. Rob Sullivan is back with Brad Menendez this week to discuss which players we like for your NFL Week 13 Waiver Wire Pickups.

DETROIT, MICHIGAN – NOVEMBER 26: Matthew Stafford #9 of the Detroit Lions participates in warmups prior to a game against the Houston Texans at Ford Field on November 26, 2020 in Detroit, Michigan. (Photo by Nic Antaya/Getty Images) NFL Week 13 Waiver Wire Pickups

Matthew Stafford completed 28-of-42 passes for 295 yards, one touchdown, and one interception in Detroit’s 41-25 Week 12 give-up against the Texans. Typically this is not a stat line to chase when looking for a QB off the waiver wire. What I do like in terms of Stafford and the Lions is the removal of Head Coach Matt Patricia. Detroit has Chicago next week then Green Bay in Week 14. There are not the greatest matchups, but worth playing on a hunch here.

Derek Carr completed 22-of-34 passes for 215 scoreless yards and one interception before being pulled in the fourth quarter of the Raiders’ Week 12 loss to the Falcons. In total, Carr turned the ball over four times, losing three fumbles in addition to his interception–now another stat line that should not be chased. This showing from Derek Carr was bizarre, as he has been dialed in recently. Look for him to bounce back against the Jets in Week 13.

In a day full of lackluster QB play, Kirk Cousins was a bright spot. Cousins finished 34-of-45 passes for 307 yards and three touchdowns in the Vikings’ Week 12 win over the Panthers. The 45 pass attempts were a season high. Despite not having Adam Thielen and Irv Smith, Cousins got the job done, peppering targets to elite rookie Justin Jefferson who scored twice. Cousins has a QB1 ceiling against the Jaguars in Week 13.

James White, playing in his first game since the Rex Burkhead injury, finished with 17 total yards on 6 touches. The beauty of fantasy football is he also had two rushing touchdowns. Trusting a New England running back has been tough for as many years as one can remember. The Patriots get the Chargers in Week 13 and Rams in Week 14. They should be chasing points in both which bolds well for White and his pass catching abilities.

It’s getting pretty thin at the RB position. Adding Cam Akers is a speculative add for your fantasy bench. Akers showed his ability on a 60+ yard 3rd quarter run. He finished that drive with his first NFL rushing score. Akers is the best RB on the Rams roster and he needs to be owned everywhere.

Frank Gore rushed 18 times for 74 yards and caught all three of his targets for 12 yards in Week 12 against the Dolphins. Gore, like or not, is a #1 RB in this league right now, and finding a team’s top back on the waiver wire at this stage of the season is extremely rare. The 74 yards were a season high for Gore, who has the backfield to himself with Lamical Perine on IR. Gore is a RB3 for a Week 13 matchup with the Bengals.

INGLEWOOD, CALIFORNIA – NOVEMBER 29: Deebo Samuel #19 of the San Francisco 49ers runs with the ball during the first half against the Los Angeles Rams at SoFi Stadium on November 29, 2020 in Inglewood, California. (Photo by Joe Scarnici/Getty Images) NFL Week 13 Waiver Wire Pickups

Deebo Samuel retuned to the Niners offense this week and instantly gave his offense some life. His ability to extend plays with his yards after the catch moves the sticks and pads his fantasy stats. Deebo finished with 12 touches for 136 total yards. With George Kittle out of the lineup, Samuel is the key cog in this offense and should be owned in every 12 team league.

Cole Beasley caught 2 of his 4 targets on the day for 25 yards. His day was highlighted by his 20-yard touchdown pass to WR Gabriel Davis. Better days are ahead for Beasley with John Brown placed on IR. This was a poorly played football game by both teams. Beasley needs to be owned in all leagues with tough matchups on the horizon for the Bills in the Niners and Steelers. Buffalo will be pass heavy in the coming weeks.

Corey Davis caught all three of his targets for 70 yards in the Titans’ Week 12 win over the Colts. Davis now has 183 receiving yards over his past two games. Davis has quietly established something of a decent fantasy floor as the team’s No. 2 pass catcher behind Brown. He should be in the high-end WR3 conversation next week against the Browns.

Mike Gesicki caught 2-of-5 targets for 35 yards and a touchdown in Week 12 against the Jets. Gesicki scored his first touchdown since Week 3 on a throw from Ryan Fitzpatrick in the back of the end-zone. Gesicki and the entire Miami offense played better with Fitzpatrick starting. Gesicki has a favorable matchup with the Bengals secondary in Week 13.

Higbee has been battling hand and elbow injuries of late, but hey, that might sum up where we are at in terms of TEs on the waiver wire. Higbee was active today in the Rams 23-20 loss to the San Francisco 49ers. Higbee had two targets that he turned into 1 catch for 6 yards. Better days are ahead for Higbee and the Rams. A date in Week 13 with Arizona is a nice matchup for Higbee and his mates.

Aaron Rodgers likes Robert Tonyan. When Aaron Rodgers likes a member of his offense, it’s worth paying attention to. Tonyan enters the Sunday night contest versus Chicago as TE6 overall. This dude needs to be owned in way more leagues than he currently is.