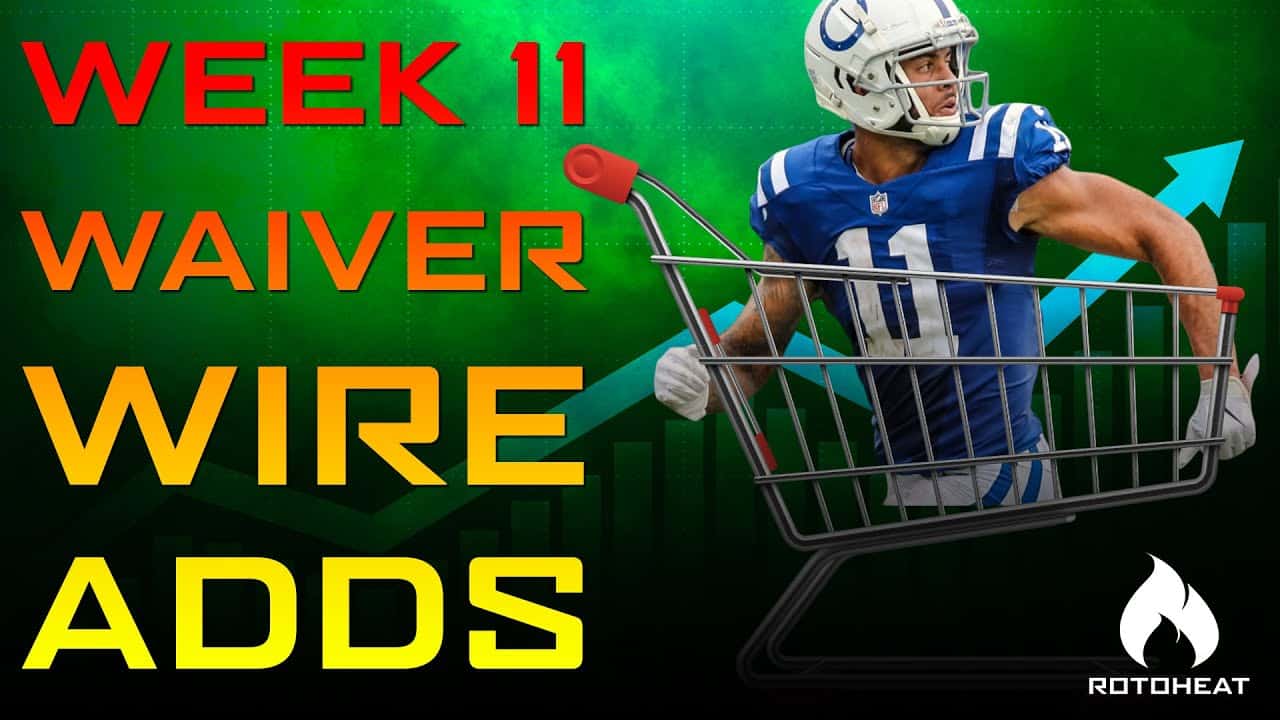 In Week 11 Buffalo, Chicago, the New York Giants, and San Francisco are on bye. Rob Sullivan is back with Brad Menendez this week to discuss the which players we like for your NFL Week 11 Waiver Wire Pickups.

In his first start since his near career-ending leg injury, Alex Smith completed 38 of his 55 pass attempts. Smith completed passes to eight different receivers on route to his 390 passing yards. He failed to throw a touchdown pass but also didn’t turn the ball over. Smith and the Football team have favorable schedule the next few weeks, hosting the Bengals next week, and are in Dallas on Thanksgiving Day. Smith is a viable streamer in those match-ups.

Tua Tagovailoa was an efficient 15 of 25 for 169 yards and 2 touchdowns. Tua looks more and more comfortable with each passing week leading the Dolphins offense. Tua gets the Broncos, Jets and Bengals in the next three weeks and will be in the streaming conversation. Carr has the Chiefs and Falcons in his next two and he will be a solid streaming option.

Derek Carr been great this year for the Raiders. Week 10 was not his finest hour as the Raiders took it to the Broncos on the ground. Carr finished just 16 of 25 for 154 scoreless yards. Carr attempted two passes in the fourth quarter because the Raiders entered the final frame with a two-score lead. Their Raiders rushing attack faced little resistance from Denver toward the end of the game so there was little need for Carr to drop back. This is his third consecutive week under 200 yards for Carr. He faces the Chiefs next week so expect him to be throwing a lot in that one. Carr enters QB2 territory in the more competitive matchup.

A week after Wayne Gallman turned 14 carries into 60 yards and a pair of touchdowns in the Giants 23-20 win over the Washington Football Team, he was up to it again Sunday. Gallman had 18 carries for only 53 yards, but scored twice. He added one catch for an additional 7 yards. Gallman is the back to have in New York with Devonta Freeman being placed on IR.

Nyheim Hines rushed 12 times for 70 yards and one touchdown and caught 5-of-6 targets for 45 yards and another touchdown in the Colts’ Week 10 win over the Titans Thursday night. The Colts’ pass-game specialist, Hines looked like the only Colts running back capable of converting a first down against Tennessee. Hines has three two-touchdown games to his name this season but zero scores in the other six contests. Hines looks like the better of the three Colts’ backs right now, but he’s a RB3/FLEX most weeks but gets a plus date with the Packers in Week 11.

Salvon Ahmed led the Dolphins running attack on the win over the Los Angeles Chargers. Ahmed the UDFA RB out of Washington carried the ball 21 times for 85 yards and a touchdown. Building off his 7 carries for 38 yards a week ago, Ahmed looks like the man to pick up as long as Myles Gaskin is on the shelf in Miami.

INDIANAPOLIS, IN – SEPTEMBER 20: Michael Pittman #11 of the Indianapolis Colts points downfield after a catch for a first down during the second quarter against the Minnesota Vikings at Lucas Oil Stadium on September 20, 2020 in Indianapolis, Indiana. (Photo by Bobby Ellis/Getty Images) NFL Week 11 Waiver Wire Pickups

Michael Pittman caught 7-of-8 targets for 101 yards in the Colts’ Week 10 win over the Titans. His targets, catches, and yards were all new season highs, as Pittman has established himself as an every-down wideout moving forward. Pittman’s long gain of 40 yards was on a fourth-quarter catch-and-run. He also rushed one time for 21 yards. Pittman has seen 15 targets over the last two weeks and looks like someone who needs to be added in 12-team leagues for the stretch run. Pittman will be an upside WR3/4 next week against the Packers.

Cole Beasley entered this contest as the WR26 on the season with 109.30 PPR points. In the Bills last second loss to the Arizona Cardinals, Beasley finished with 11 catches for 109 yards and a touchdown. WR John Brown left early with a knee injury and Beasley should see his involvement in the Bills passing attack increase as a result. Any time you can add a top-24 WR in Week 11, jump all over the opportunity.

K.J. Hamler hauled in 5 of his 10 targets for 50 yards in the Broncos loss to Las Vegas. He has now seen 20 targets in the past two weeks and is emerging as a favorite of QB Drew Lock. Hamler has struggled to stay healthy in his rookie season bit when he is on the field he is involved in this offense.

Tyler Higbee caught 3-of-6 targets for 60 yards in the Rams’ Week 10 win over the Seahawks. It was one of Higbee’s best games of the year, and it should’ve been bigger. Jared Goff just missed Higbee for what could have been a long touchdown grab. Higbee continues to rotate with Gerald Everett , who was inured in this one. If Everett’s injury forces him to miss time, Higbee will be back in the TE1 conversation again.

Jordan Reed caught 5-of-6 targets for 62 yards in the 49ers’ Week 10 loss to the Saints. Reed was the clear-cut pass catching tight end for the 49ers over Ross Dwelley; only Brandon Aiyuk saw more targets than Reed in Week 10. There’s a chance George Kittle won’t return this season, so Reed should be picked up in all tight end premium leagues and played as a streaming option in 12-teamers. Next week Reed will take on a Rams defense that allows 5.5 tight end receptions per game.

Logan Thomas caught 4-of-6 targets for 66 yards in Washington’s Week 10 loss to the Lions. Against his former team, Thomas had a 27-yard grab and another near miss downfield on an errant throw from Alex Smith. Thomas, who continues to be among the league leaders in tight end pass routes, should be a decent floor play with Smith under center for the remainder of the season. Thomas has an excellent Week 11 matchup against a Bengals defense that’s allowed the third most tight end yards and the sixth most tight end receptions.