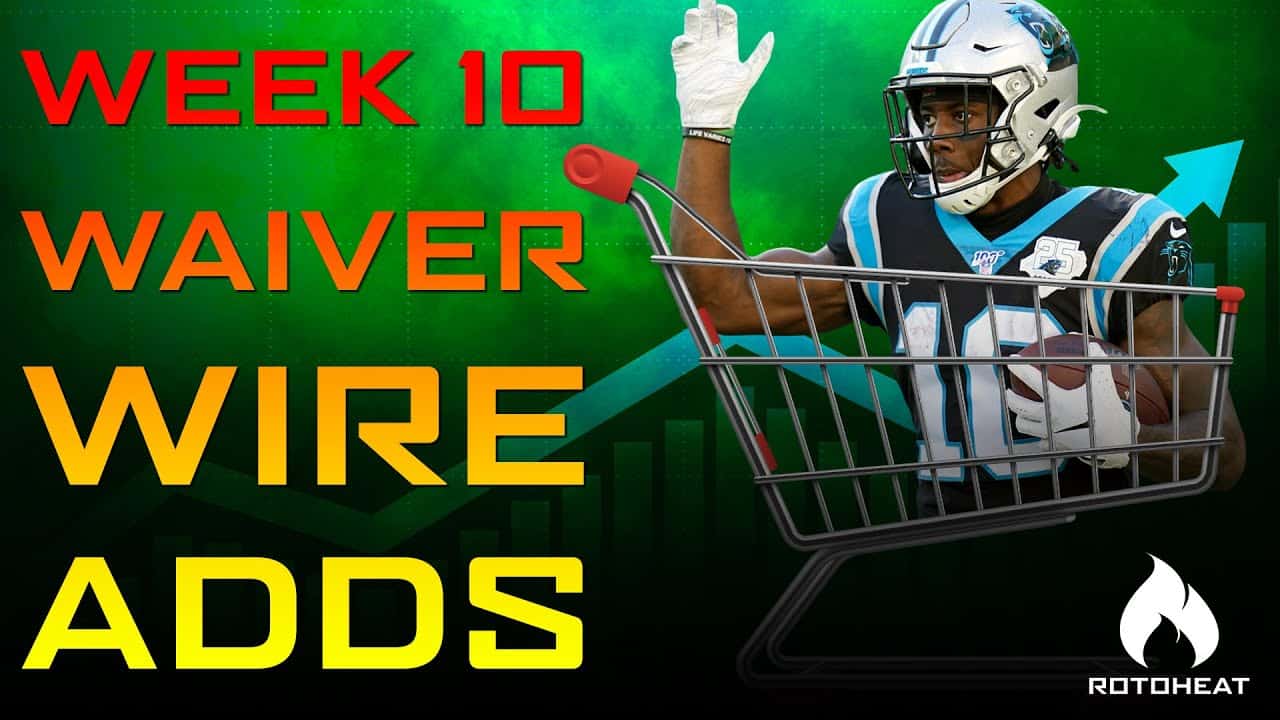 In Week 10 Atlanta, Dallas, Kansas City, and the New York Jets are on bye. This week Brad Menendez and Paul Veldboom discuss the upcoming week and which players we like for your NFL Week 10 Waiver Wire Pickups.

NEW ORLEANS, LOUISIANA – OCTOBER 25: Teddy Bridgewater #5 of the Carolina Panthers warms up before the game against the New Orleans Saints at the Mercedes-Benz Superdome on October 25, 2020 in New Orleans, Louisiana. (Photo by Jonathan Bachman/Getty Images) NFL Week 10 Waiver Wire Pickups

Teddy Bridgewater completed 36-of-49 passes for 310 yards and two touchdowns in the Panthers’ Week 9 loss to the Chiefs. The Panthers called a bunch of screens to Christian McCaffrey and hit on countless shallow crossers to Robby Anderson (13 targets), Curtis Samuel (9), and D.J. Moore (3). The Panthers offense has enough weapons to lead Bridgewater into the high-end or mid-range QB2 conversation.

Kirk Cousins completed 13-of-20 passes for 220 yards and three touchdowns in the Vikings’ 34-20, Week 9 win over the Lions. Cousins has attempted 30 passes in a game just twice this season and has totaled 34 throws over the last two weeks with Dalvin Cook smashing defenses on the ground with 478 total yards and six touchdowns Weeks 8-9. Cousins’ per-attempt numbers look great. AS long as he doesn’t turn the ball over he is a mid to high QB2 weekly.

Alex Smith completed 24-of-32 passes for 325 yards, one touchdown and three interceptions in Washington’s 23-20, Week 9 loss to the Giants. Smith was forced into the game with one minute remaining in the first quarter after Kyle Allen suffered one a gruesome leg injury. Smith’s biggest play of the day was a 68-yard touchdown to WR Terry McLaurin. Smith has some decent weapons at his disposal, but especially at this stage of his career, he is an extremely conservative passer. He will nevertheless offer QB2 upside for the next three weeks, where Washington catches @DET, vs. CIN and @DAL, with that final game coming on Thanksgiving.

Duke Johnson rushed 16 times for 41 yards and a touchdown in Week 9 against the Jaguars. Johnson took over late in the first quarter with David Johnson in the concussion protocol. He averaged just 2.6 YPC but managed a goal-line touchdown. Johnson caught all four of his targets for 32 yards. If Johnson starts Week 10, he’ll be a plug-in RB3 against the Browns.

Wayne Gallman turned 14 carries into 60 yards and a pair of touchdowns in the Giants 23-20 win over the Washington Football Team. Gallman added one catch for an additional 9 yards. Gallman has filled in admirably for the injured Devonta Freeman and will remain in the RB2/RB3 conversation even when Freeman returns

Tony Pollard has seen his snap counts and touches increase over the past three weeks. Pollard had 9 touches versus the Steelers and Zeke is banged up. Pollard averaged 6.3 yards per carry on his way to totaling 58 yards and 6.9 PPR points. At this point in the season Pollard should be owned in all 12 team leagues. He’s a potential lottery ticket if Ezekiel Elliot were to miss time and he’s a nice trade chip if he doesn’t.

With Myles Gaskin on IR and Matt Breida inactive, the Miami Dolphins turned to Jordan Howard and former Washington RB Salvon Ahmed. Ahmed was an UDFA RB initially singed by the San Francisco 49ers in May and then claimed off waivers by the Dolphins this August. He was promoted off off the practice roster this week in time for the matchup with Arizona. He had 7 carries for 38 yards in Miami’s impressive road win. Someone needs to take over this backfield and it is not Jordan Howard. At this stage of the season with the current running back landscape he’s worth the dart throw.

Curtis Samuel caught 9-of-9 targets for 105 yards and a touchdown in the Panthers’ Week 9 loss to the Chiefs. Samuel has emerged in recent weeks. Samuel has been a near every-down player and has been luckily finding the end zone on creative plays from OC Joe Brady. Samuel’s upside is evident, and he seems to be taking over for WR DJ Moore in thei Panthers offense. Samuel will be a classic boom-bust flex play against the Bucs who many consider to be a top-three defense.

Tim Patrick caught 4-of-9 targets for 29 yards and a touchdown in the Broncos’ Week 9 loss to the Falcons. Patrick’s nine targets is an impressive amount. Patrick saw fewer targets than Jerry Jeudy and KJ Hamler, both of whom had breakout performances. Patrick has found himself a nice role in this offense filling in for the injured Courtland Sutton. He’s a flex play next week against the pass friendly Las Vegas Raiders.

Michael Pittman caught 4-of-7 targets for 56 yards in the Colts’ Week 9 loss to the Ravens. With TY Hilton out, Pittman becomes the teams WR. 1He was close to coming down with a couple deep ball from Philip Rivers, and settles for a long catch of 18 yards against Baltimore’s stout defense. Pittman should continue to develop an every-week role in the Indy offense. Pittman should be rostered in 12-team leagues. He could be a WR3 option next week against the Titans, depending on Hilton’s status.

Eric Ebron is back. Last week we told you to pick him up. Ebron caught 4-of-5 targets for 48 yards and a Touchdown in the Steelers’ Week 8 win over the Ravens. Ebron finished third in targets on a day that QB Ben Roethlisberger attempted 32 pass attempts. Ebron has weekly touchdown potential as a plus red zone option. TE is a wasteland and Ebron should be more owned than he is.

Irv Smith caught 2-of-4 targets for 10 yards and two touchdowns in the Vikings’ Week 9 win over the Lions. Smith saw 20% of Kirk Cousins targets this week. The sophomore tight end made both catches count, scoring from nine and one yards away. The touchdowns were Smith’s first two of the season. He’s still nothing more than a mid-range TE2, but he is more nd more involved in this offense weekly.

Another week and another week where we suggest Dallas Goedert. With the Eagles on bye this week, Goedert got another week to rest his ankle. Don’t let his first game back last week fool you. He will be heavily involved in the offense coming out of the bye the rest of the season, especially in the red zone.