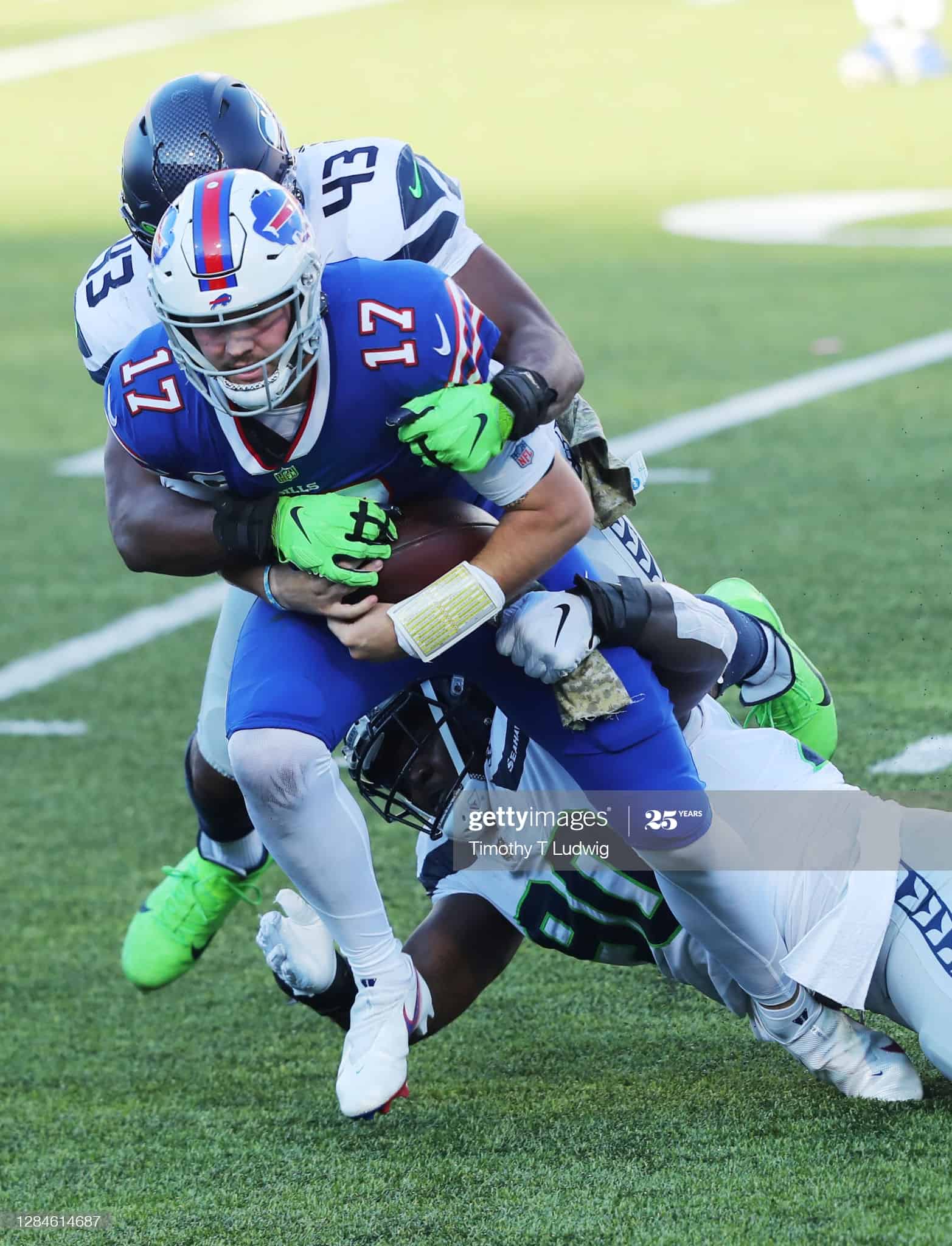 Smack dab in the middle of the season means more bye weeks, and this year in particular, more injuries. After reading this, go look at your league’s highest scoring defensive players by position; it is a mess and gets weird quickly. Don’t worry though, we do the work so you don’t have to! Here are my NFL Week 10 IDP Waiver Wire Adds!

SANTA CLARA, CA – OCTOBER 06: Markus Golden #44 of the Arizona Cardinals reacts during their game against the San Francisco 49ers at Levi’s Stadium on October 6, 2016 in Santa Clara, California. (Photo by Ezra Shaw/Getty Images)

Matt Milano has not been able to shake the injury bug this year and was placed on injured reserve this past weekend. Klein stepped into his role and a 95% snap share Week 9 against Seattle. He responded with 5 solos, 1 TFL, 2 sacks, 1 PD, 1 forced fumble and 1 recovered fumble for 23.00 points. We clearly can’t expect all that each week, but with a potential Week 10 shootout against Arizona on the horizon and a high snap share, Klein is a great pick-up while Milano recovers.

A boom or bust play here, Highsmith has been finding himself being more productive in relief of Dupree and Watt as this year has rolled on. After getting 12 points over their first 6 games, Highsmith has 16 over his past two games. The Bengals give up a lot of pressure to opposing teams, and if you are in a deep league and need a dart throw on a potential, that’s what Highsmith is.

In Week 10 the Cardinals face the Bills who just gave up oodles of pressure to Seattle in Week 9. Golden was brought in via trade to rush the passer after the loss of Chandler Jones for the year. In his first game returning as a Cardinal, Golden had 2 solos, 3 assists, 1 TFL, 1 sack and 1 PD. In what looks to be another high scoring game, I like Golden’s chances for some big plays and another nice fantasy football week.

Under the “add it you have room to monitor the situation” category, Malik played his highest percentage of snaps this year (49%) and responded with 6 solos and 5 assists. It appears that this was mainly due to injuries on the team, but Harrison has the pedigree (2020 3rd round pick from Ohio State) to be a relevant fantasy player. He may have just needed more time, like many rookies this year, to acclimate to the NFL. I wouldn’t want to start him right now, but if you can stash him to see if the playing time increase continues over the last half of this season, he may be a factor down the road this year.

INDIANAPOLIS, IN – OCTOBER 27: Khari Willis #37 of the Indianapolis Colts breaks up a pass to Noah Fant #87 of the Denver Broncos in the end zone during the second quarter of the game at Lucas Oil Stadium on October 27, 2019 in Indianapolis, Indiana. (Photo by Bobby Ellis/Getty Images)

Our DB 35 for the year heading into the Monday night game for Week 9, Willis is averaging slightly over 7 points a game. Most of his production is through tackles as well, which I like in defensive backs. He was on a bye Week 7, but in Weeks 6, 8 and 9 he is averaging 9.5 points a game, and in Week 10 the Colts face the Titans who have the offense to go off on any team. Willis is the highest owned of any of the defensive backs we are discussing this week, but is also the most likely to have rest of the season value.

Everett has has 96%, 100% and 100% snap shares the past three weeks. Within those weeks he has had 19 points, after only 3 in the first five weeks combined. Washington plays Detroit in Week 10, and the Lions give up the 12th most points to opposing safeties this year. This play doesn’t reflect a very high ceiling, but does offer a decent floor given this recent playing time, production and match-up.

This one is tricky due to position eligibility differences on various sites, but filling in for fellow rookie Jeremy Chinn at the safety/linebacker hybrid role for the Panthers (within which Chinn has been very productive) Franklin had 5 solos, 2 assists, 1 TFL and 1 sack against the Chiefs in Week 9 on a 98% snap share. This add is contingent on Chinn’s health, but if he sits for another week, Franklin is a nice bye week fill in against the Buccaneers. I wouldn’t want to start him at linebacker as I think there are usually better options, but if he has safety eligibility like in Yahoo!, I like him there.

Boyd has been forced into action with the plethora of injuries to Vikings cornerbacks, and he played very well against Detroit (8 solos, 3 assists, 1 TFL, 1 PD and 1 forced fumble). Detroit had not been giving up many points to opposing cornerbacks (9th fewest). This coming week the Vikings play Chicago, and the Bears give the 4th most points to opposing cornerbacks. Pay attention to the Vikings cornerback health situation this week, but if pressed into action again, Boyd is a great play.

NEW ORLEANS, LOUISIANA – SEPTEMBER 13: Tom Brady #12 of the Tampa Bay Buccaneers is sacked by Trey Hendrickson #91 of the New Orleans Saints during the second quarter at the Mercedes-Benz Superdome on September 13, 2020 in New Orleans, Louisiana. (Photo by Chris Graythen/Getty Images)

Counter to my thoughts from earlier this year, Hendrickson continues to get to people behind the line of scrimmage. He only has 15 solos and 3 assists, but he has 8 TFL and 7.5 sacks this year. Over 8 games so far this year he has 6 of those at 7 points or more; the remaining two however he had 1.00 and .50. Clearly if he doesn’t get a TFL or sack he isn’t getting you much, but given how consistent he has been with this, it is time I give him his due and have him on here.

Week 10 brings the 49ers to New Orleans and while the 49ers are right in the middle of the league in terms of points to opposing defensive ends, as we saw on Thursday night, this is not the 49ers team we thought it would be. I like the odds of Trey get another TFL and/or sack this week, which is all you really need when mining the waiver wire.

Over the past 3 games Dre’Mont has 22.50 points after just 3.00 total in the first 5 games. He is more of a run stuff in the 3-4 Broncos base defense, but he has benefited from more attention being paid to Bradley Chubb and Malik Reed recently, which has given his production a boost. Week 10 has the Broncos facing the Raiders, who give up the 10th most fantasy points to opposing defensive ends. Despite playing time only nearing 60%, if you are hurting for defensive end help, Dre’Mont should have another decent week this coming week.

Dunlap may not be available in your leagues, but if he is and you need defensive line help, he should be at the top of your waiver list. I was wrong in our Sit/Start article last week, as Dunlap did not need any time to acclimate, and the Seattle defensive line got a huge boost with Dunlap. After scoring 25.50 points this season in his first 6 games this season, Dunlap came out firing and had 3 solos, 2 assists, 3 TFL and 1 sack for 16.00 points in Week 9.

The Rams don’t give up a ton to opposing defensive ends this year, but with another potential shootout and a rejuvenated Seattle pass rusher, I like the spot for Dunlap, and he should hold value the rest of the year.

A high tide raises all ships, or so they say (this doesn’t help your boat if your anchor line isn’t long enough, but that’s a different topic). Dunlap’s arrival makes the whole defensive line stronger and less focus can be given to others like Reed.

The Rams give up the 14th most points to opposing defensive tackles, and when the Rams last played the Dolphins their defensive line had a field day. Reed should be rostered in defensive tackle required leagues anyway, but if he isn’t I like this spot a lot for him after getting 3 solos, 1 assist, 2 TFL and 2.5 sacks against Buffalo in Week 9.

You catch NFL Week 10 IDP Waiver Wire Adds and all our other video content on YouTube. Be sure to subscribe and click the notification bell to ensure that you don’t miss any of our other great content. We have free IDP Rankings over on RotoHeat.com, and you can catch our IDP-Specific podcast on most podcatchers! You can also find me on Twitter.