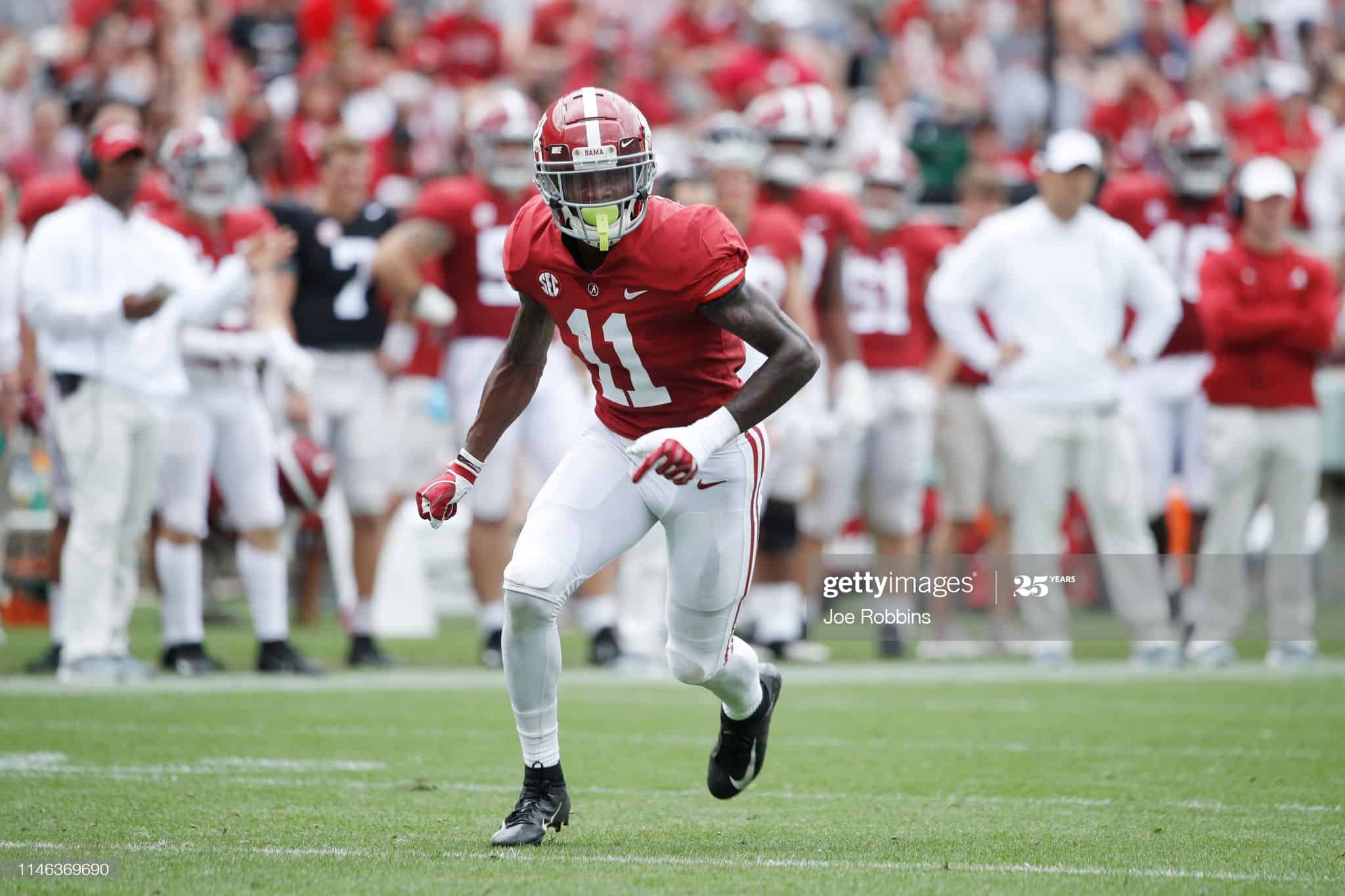 Next up in our Dynasty Outlook series; Laviska Shenault vs Henry Ruggs III. In Dynasty, there are certain players that tend to hold more uncertainty, or are more divisive than others. The Dynasty Outlook series takes a deeper dive into those players that the RotoHeat community noted as the guys they are most interested in hearing about. Engage with 1,700+ passionate dynasty players and let the RotoHeat content team know what topics YOU want to hear about by visiting our RotoHeat Facebook page.

BOULDER, CO – SEPTEMBER 7: Wide receiver Laviska Shenault Jr. #2 of the Colorado Buffaloes carries the ball against the Nebraska Cornhuskers in the fourth quarter of a game at Folsom Field on September 7, 2019 in Boulder, Colorado. (Photo by Dustin Bradford/Getty Images) Laviska Shenault vs Henry Ruggs III

Laviska Shenault is the type of swiss army knife that creative offensive coordinators will love to add to their list of weapons. His ability to win on the outside based off of his athleticism, coupled with his mindset that he can score whenever he touches the ball, offers a truly distinctive skill set.

Jacksonville is a good landing spot for Shenault, provided Jay Gruden and the Jaguars line him up in various spots on offense. Locking him into one particular role is doing everyone involved a disservice and his impact will suffer as a result. He still has work to do as a route runner, but he received a late start at doing so because of the lack of demand with the details of it during his first two seasons.

His body frame and playing style also allows him to transition into the slot to create mismatches or on critical downs where a play needs to be made. Still finding his way in that area, he has the upside in order to become a highly explosive weapon that could complement D.J. Chark in Jacksonville.

A match made in heaven for Alabama’s multi-level passing game, he dominated in multiple areas, but it’s his ability to rack up yards after the catch that made him a difference maker during his three-year career. His physicality levels in his route stems could improve, but defensive coordinators will be hesitant to come down and challenge him because of the vertical dynamic associated with his game.

A much better route runner than given credit for, he has the ability to stop on a dime in order to change directions without any extra needed steps. Ruggs III can win in the short-to-intermediate areas of the field as well. His speed forces defenses to guard every blade of grass, but even when doing so, he can leave tread marks on the playing surface from how fast he runs in an instant, as a result Ruggs III was the first WR off the board 12th overall. He possess the ability to make an instant impact for the Raiders because of how translatable his skill set is into today’s game.

Laviska Shenault should immediately challenge Dede Westbrook for the No. 2 receiver role behind D.J. Chark. Shenault struggled to stay healthy at Colorado, but he was wildly effective when he played. The Buffalos used him in a variety of ways, and it sounds like Jacksonville will be the same. Shenault could have a little 2019 Deebo Samuel in his game, and has been compared to A.J. Brown. He’s a very good complement to D.J. Chark.

Laviska’s success in 2020 comes down to game script, quarterback play, and health. As far as game script goes, it should be in his favor, as the Jags should trail often and go to the air with regularity. Gardner Minshew and Nick Foles combined to throw 589 passes, 12th highest in a league a year ago. That number has the potential to rise over 600 in 2020. Laviska projects to be a decent flex option with WR2 upside as Jacksonville continues its rebuild. His main competition for targets seems to be Chris Conley, but as noted above, if injury continues to slow him, all bets are off.

When all is said and done, I see Laviska and the Jaguars struggling with consistency and the Laviska Shenault 2020 Dynasty Outlook to be in the WR4/5 range.

In 2020, Ruggs projects as the #1 WR on the Raiders depth chart. In 2019, The Raiders ran most of their plays out of 11 personnel (1 running back, 1 tight end, 3 wide receivers) 52.5% of snaps, ninth-lowest percentage in the league. Not surprisingly, the offense played with multiple tight ends almost 30% of the time. The only team to run more plays out of 22 personnel (2 running backs, 2 tight ends, 1 wide receiver) in 2019 was the Baltimore Ravens.

With the addition of Ruggs, and to a lesser extent Bryan Edwards, expect the percentage of 11 personnel to climb in 2020. Ruggs should get plenty of opportunities to prove himself as the Raiders should target him often in the passing game. The biggest concern for Ruggs is his Quarterback play.

Derek Carr will enter 2020 as the Raiders starting QB. Carr finished 2019 8th in passing yards with 4,055 and 19th in touchdowns with 21 on the season. What doesn’t work in Ruggs’ favor is Derek Carr’s Average Intended Yards. In 2019, it was 6.3. Only Teddy Bridgewater’s 6.2 was worse. Should the Raiders transition to Mariota, it gets slightly better for Ruggs. Mariota’s Average Intended Yards in 2019 was 7.4 (20th).

When all is said and done, I see Ruggs and the Raiders struggling with consistency. Ruggs will find himself on your bench more often than in your starting lineup. I project Henry Ruggs III as a high-ceiling flex starter in 2020.

Both are extremely talented prospects and if I am forced to choose between the two, I will go with Henry Ruggs III.

Thank you for reading the Laviska Shenault vs. Henry Ruggs III.