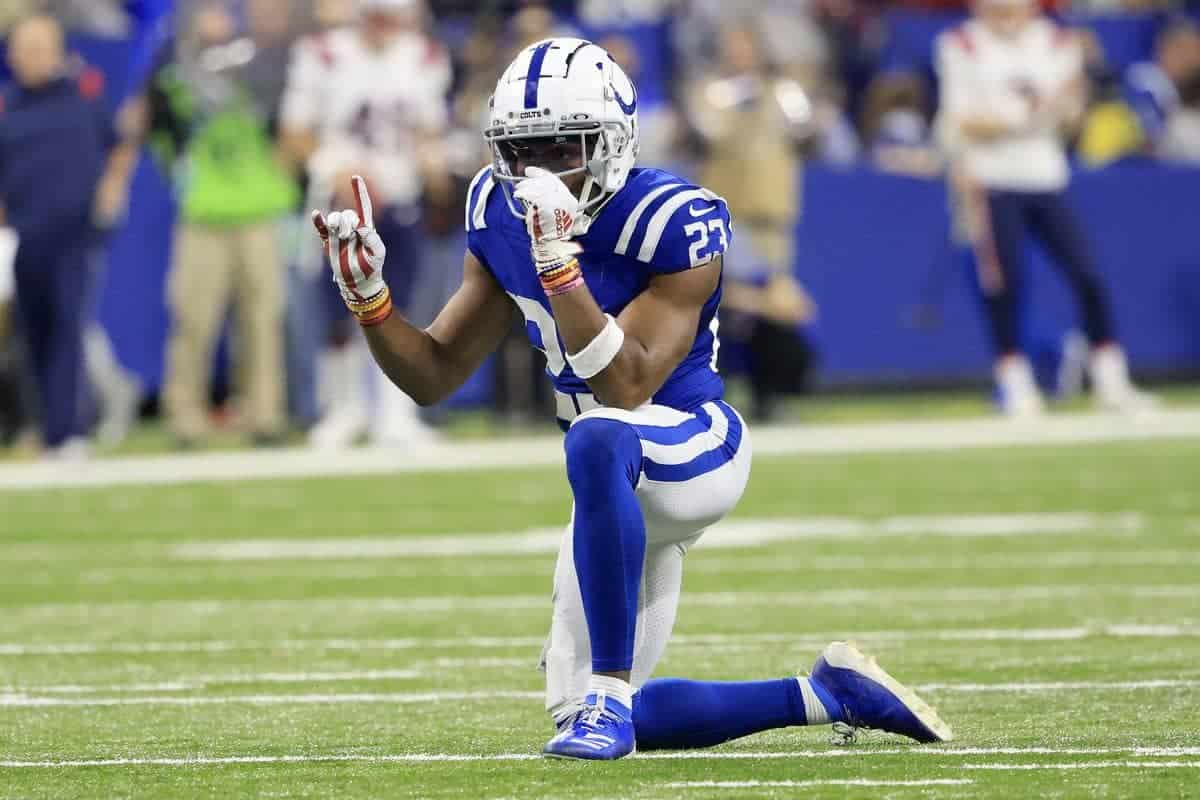 Cornerback is a position often ignored by many fantasy team managers. You can find cornerbacks worth starting on waivers each week if your league requires them, but most IDP leagues do not even require you to start one. I normally employ a rotating cornerback of the week type of strategy in my leagues where they are required, but there are some that are worthy of drafting in DB designation leagues The following are my 2022 Top 10 Redraft Cornerbacks, and I think you will see some trends in regards to why I like these players.

As a reminder, when I am discussing redraft rankings we are looking at the RotoHeat Scoring we have talked about on prior shows and in articles. Always know your league, starting requirements, and scoring system.

Kenny Moore was 1st in cornerback points in 2021, and 2nd in points per game (of cornerbacks who played in at least three games). He graded out well at tackling and pass rushing and was alright in coverage. 67% of his snaps were at slot corner, with 18% at outside corner, and 10% in the box. Don’t be afraid of the slot snaps, teams are using three or more receivers more and more, and even when they don’t he does not leave the field.

Tackles and pass deflections are the bread and butter of cornerbacks in IDP. Big plays are not sticky stats and come and go. He had the most solo tackles and was tied for 15th in pass deflections. I believe the Colts defense will be improved this year, and with a better offense as well, the opportunities for Moore will remain. He played over 97% of the team defensive snaps last year and that would be similar this year. Throw in a few big plays (sacks, TFLs, interceptions, etc) each year he has been a starter and Kenny is as safe a bet to finish as the #1 cornerback again as anyone.

Going from an undrafted free agent in 2017 (Kenny Moore) to the 5th overall pick of 2016 will tell you all you need to know about how much draft capital matters for IDP points. Ramsey was tied for 6th in pass deflections and was 6th in solo tackles in 2021. He was 2nd in overall points and 3rd in points per game. He has had at least 52 solos in 4/6 seasons and double-digit pass deflections in 4/6 seasons.

Ramsey is one of the rarer examples of a high-end NFL cornerback being a quality IDP asset. He was 1st in PFF grades for qualifying cornerback and is routinely a top cornerback in the league. If you want to bet on talent, draft capital, team expectations, and past performance, Jalen Ramsey is your cornerback.

A guy coming off of injury this high? Yeah, I am still high on Marlon. His usage has varied wildly year-to-year based on what the team needs from him. The 16th pick in the 2017 draft class, Marlon became a full-time starter in 2019. Here are cornerback snap percentages since that time:

2021 was a weird year for several reasons. He got hurt and only played in 12 games, but loads of defensive backfield injuries forced him to play a larger variety of snap positions. It was also his worst. 2020 and 2019 saw him have quality overall grades, especially in coverage. With a healthier secondary overall this year, and the addition of rookie Kyle Hamilton, Humphrey should be able to return mainly to his slot role, and then wide, corner past performances. Each of those two years he had at least 53 solos, 12 assists, 4 TFL, and 11 pass deflections. If you are going to draft a cornerback to use weekly this is a great baseline to start from.

Yes, he is on a new team this year, going to the Chargers in free agency from the Patriots, but in terms of other defensive talent around him, I believe JC is going to a better situation. The Chargers certainly have a more explosive offense and play in a more explosive division. I think JC’s opportunities have gone up and I love what he has shown thus far in his career.

In only his second year in the league, AJ made his name known as one of the best young cornerbacks. Despite poor run defense grades he was the second highest graded cornerback after Jalen Ramsey. For us was 10th in total points for cornerbacks and 12th in points per game.

He has had at least 52 solos, 13 assists, 3 TFL, 7 pass deflections, and 1 interception each year in his young career. He made improvements even after a good rookie year and should be on the field a lot with the Falcons going through their rebuild; he has been on the field for over 90% of the snaps in games he has played.

In 2021 he was PFF’s 21st-rated cornerback in run defense, which is great for someone who played 61% of his snaps in the slot, and 15% of his snaps in the box or on the defensive line. For IDP he was 5th in points per game (of those who played more than 1 game) and CB 5 overall. His role should not be changing this year, and for another no so heralded name, Sneed feels like a safe bet for consistent IDP production from the CB slot.

A less familiar name of those on the list thus far, Paulson was a and ended 2021 as our 21st overall CB. A standout at Stanford who may have been a 1st-round pick if he declared in 2020, he was a 2021 3rd round pick. Only 23 years old with great size (6’1″, 195 lbs) and great athleticism, I thought the Saints got a steal last year and feel the same now.

Last year he played all 17 games and had a respectable year opposite Marshon Lattimore. Paulson ended with 55 solos, 11 assists, 8 pass deflections, 4 TFL, and 3 interceptions. This was good enough for CB 21. Playing opposite Lattimore is a great place to look for CB production, and with what Paulson has shown thus far the sky is the limit for him going forward.

The son of an 11-year veteran and 3-time Pro Bowl cornerback, Patrick knows what it takes to be a great NFL cornerback, and has it in his bloodline. He had a respectable rookie year for the Broncos, with 45 solos, 13 assists, 14 pass deflections, 4 interceptions 1 TFL, and 1 touchdown. He had an above-average overall grade too, coming in at CB 39.

He played 83% of the defensive snaps last year and I expect him to take a leap forward this year. The team as a whole should be better, and the offense should take some pressure off a unit that was on the field too often last year. He was CB 23 for us last year I can easily see him taking a big leap as the best cornerback on the team this year.

Taron is not as big of a name as Tre’Davous White, nor does he (a 4th round pick in 2018) have the draft capital of 2022 1st-round pick Kaiir Elam. When we are talking about IDP purposes though, give me the proven slot corner who will get you the tackles we want opposite a high-powered offense.

I wouldn’t be surprised if some of you aren’t sure who this is. A 2017 3rd round pick of the Eagles, Douglas spent three years with the, one year with the Panthers, and then was on four different practice squads before signing with the Packers. After years of 14, 16, 16, and 14 games, Rasul had his best all-around year as a pro in 12 games with the Packers. He graded out well too, ending the season as the 16th-best cornerback according to PFF.

With an 89% snap share in the games he played, he had 57 tackles (51 solo), 5 TFL, 13 pass deflections, 5 interceptions, 2 touchdowns, 1 TFL, and 1 forced fumble. That was good enough for 9th in total points for cornerbacks, and 1st in points per game.

Jaire Alexander will be back as the CB 1 for the Packers, but Rasul resigned with the Packers and being opposite one of the the NFL’s best cornerbacks is a great place to find IDP points. I like Rasul to have another great IDP year for us.