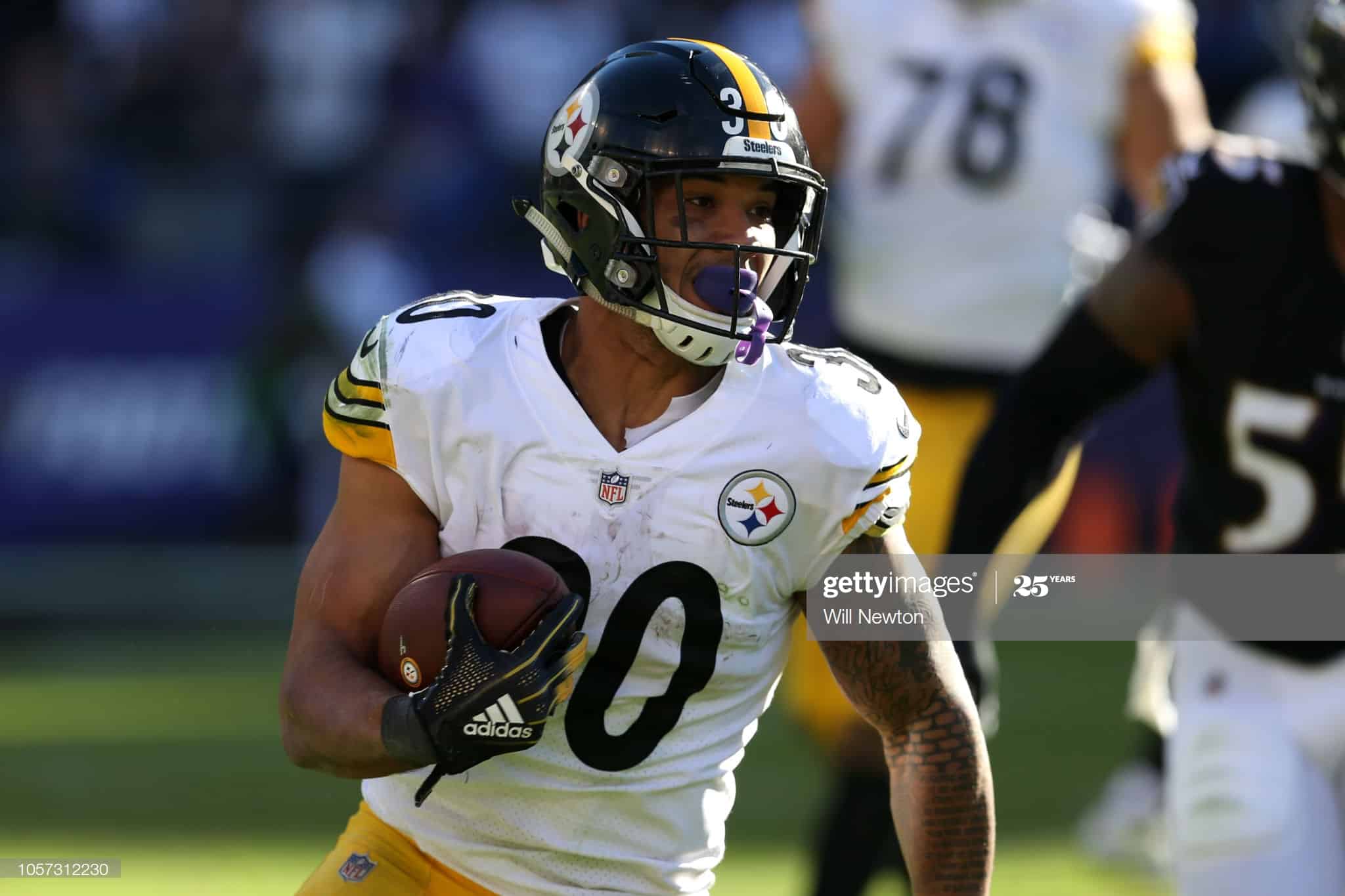 The Pittsburgh Steelers selected RB James Conner in the third round (105th overall) of the 2017 NFL Draft. Conner was the eighth running back selected in the draft. In four seasons at Pittsburgh, Conner totaled 668 rush attempts for 3,733 yards with 52 touchdowns. He added 30 receptions for 412 yards and an addition 4 scores.

2015 was a challenging year for Conner. On September 5, 2015, Conner tore his MCL during the Panthers’ season opener. He finished the game with eight carries for 77 rushing yards and scored two rushing touchdowns, but missed the rest of his junior season. In addition to his knee injury, Conner was also diagnosed with Hodgkin’s Lymphoma. He was deemed cancer-free during the off-season.

In his rookie season, Conner entered training camp battling with Knile Davis and Fitzgerald Toussaint to be the back up to Le’Veon Bell. He completed the 2017 season with 144 yards on 32 attempts. His RB112 finish (14.4 PPR points) left him off the fantasy radar.

In 2018, James Conner was named the Steelers starting running back after Le’Veon Bell’s decision to hold out due to a contract dispute. In his first start, Conner had 31 carries for 135 rushing yards and two touchdowns. He finished the season as RB6 with 280 PPR points. Conner scored 12 rushing touchdowns and one receiving touchdown while amassing 1,470 yards on 270 touches. In week 13 he suffered a lower leg injury that sidelined him until week 17.

Entering the 2019 season with the Le’Veon Bell saga behind him and the Steelers, Conner was the clear lead back for Pittsburgh. He injured his knee in week two and played through it, but his injury limited his touches and his effectiveness. In week’s 3-6, Conner averaged 16 touches and 50 total yards a game. In week 8, Conner (recovered from his knee injury) had 26 touches and turned them into 150 yards and two touchdowns before exiting the game with a shoulder injury. Conner’s durability was openly questioned. He returned in week 11, and then missed week’s 12-14, as well as week 17. His season was limited to 10 games and he finished as RB35 with 145.5 PPR points.

Entering 2020, James Conner’s role in the Steelers offense is certainly less clear than a year ago. Conner, as noted, has shown durability issues, and as a result the coaching staff has come out with a desire to limit his workload. In addition, the Steelers selected Maryland RB Anthony McFarland Jr in the 4th round. With Benny Snell, Jaylen Samuels and now McFarland, the Steelers have plenty of options in the backfield.

The Steelers have been a bell cow type running back offense for years, but it’s looking like a committee type approach in 2020. Conner will start the season as the primary ball carrier, but I believe the Steelers want him under 280-300 touches on the year, and as a result he will be hard pressed to finish in the top 24 at the running back position.

Entering 2021, the outlook for Conner doesn’t look any better than it does entering 2020. We often refer to a limited shelf life for running backs and James Conner is a prime example of why.

2020 is a contract year for Conner, so if his durability issues continue and we see anything out of that backfield in terms of production from the supporting cast, it’s safe to assume Conner hits the street looking for work prior to the 2021 season. His likelihood of landing a lead role in a backfield is highly unlikely.

I currently have Conner ranked at #68 overall and as my RB26. If I owned James Conner, I’d hold and hope that he can stay healthy and produce. If he is looking good around week 3-4 I am going to look to sell. James Conner is not a player you should seek to buy at this time due to the uncertainty surrounding him. A mid to late 2nd is likely what it would take to acquire him, and I don’t believe the value is there.

Thank you for reading the James Conner 2020 Dynasty Outlook