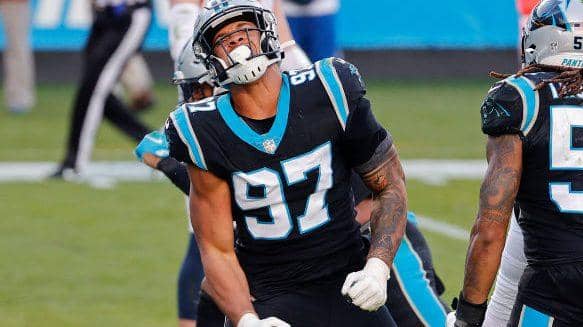 Wake Up! IDP Sleepers to Watch for 2022 – Yetur Gross-Matos

Welcome back to my new series on IDP sleepers for 2022! I hope I didn’t catch you sleeping with the first drop, but if I did you can read it over here. We are going to go all the way across the country from San Francisco, California to Charlotte, North Carolina for our next player. That player is Yetur Gross-Matos, a third-year defensive lineman for the Carolina Panthers.

A four-star defensive line prospect out of Chancellor High School in Fredericksburg, Virginia, Yetur committed to Penn State in February of 2016 and joined the team as a true freshman in 2017. Over the course of his three years playing in college, he had 111 tackles (67 solo), 36.5 TFL, 18.5 sacks, 2 forced fumbles, and 2 fumble recoveries.

The Carolina Panthers selected Yetur with the 38th pick (2nd round) in the 2020 NFL Draft. He started in 7 of the 12 games he played that year, playing 47.5% of the snaps in games he played. That year he ended with poor PFF grades across the board.

2021 saw Yetur progress as an NFL player, as he graded out better across the board in the 14 games he played (he started 2 of those games). He had a 38.5% snap share for the games he played in, which was down from 2020, but he had more combined tackles, solo tackles, and TFL on the year.

In Week 15 starting defensive tackle Derrick Brown was out and Yetur played more defensive tackle than normal; he responded with 5 tackles (3 solo), 2.5 sacks, and 1 TFL, for the best game of his career. He had nice games in Weeks 16 and 17 to end the season on a high note.

At 6’5″, 265 lbs, Yetur has an imposing frame with some room to fill out yet. He will be just 24 years old this season and is part of a young, growing defense. At the end of last year, he showed he can to play inside and outside on the defensive line and that flexibility will only help him going forward. The team has shown a commitment to building up their young defense and this will be year three of the defense being run by Phil Snow.

If Yetur takes a step forward and becomes a full-time starter in 2022 while continuing to improve this could be a very imposing defensive front. With the draft capital the team invested in him, and the improvement he has shown thus far, I am taking a late flier on Yetur this year, whether at the end of drafts or off waivers once the draft is done. The potential return on investment here is huge for 2022, and beyond if you are in a dynasty league where he is on waivers.

Thank you for reading Wake Up! IDP Sleepers to Watch for 2022 – Yetur Gross-Matos