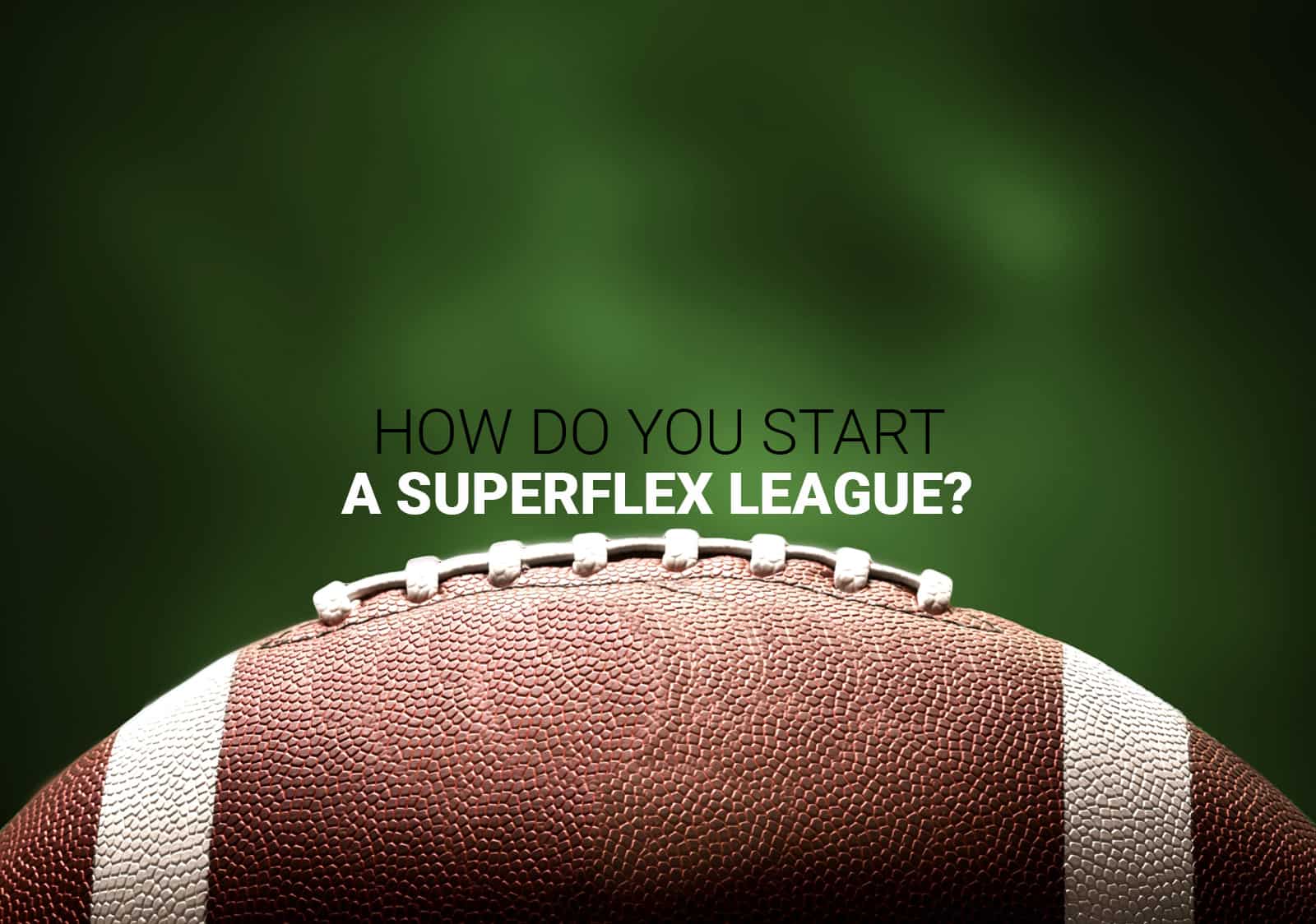 If you’re looking into a superflex league, odds are you have done some fantasy football and you’re looking to add a new dynamic to your league, which is a great thing! I always encourage my leagues to keep trying to make it more fun and more challenging, and moving to or starting up a Superflex league can do both. In this step by step guide, I’ll walk you through the basics of getting your Superflex league moving forward, as well as help if you are converting to a Superflex league (Spoiler Alert: It’s not too crazy!).

How Do You Start a Superflex Fantasy Football League? New League Step by Step

1. What type of league are you going to start? Are you going to start a redraft (where you redraft the entire league each season) or a dynasty/keeper (basically keeping the entire team, or just a certain number of players each year, where the rest would go back into the draft pool). If you’ve never done fantasy football before, redraft can be a nice way to dip your feet in and see if you and your league-mates like it or not.

After the season, you can always decide to change to a full dynasty and either keep the team you drafted or completely redraft the new dynasty league. Within a dynasty league, you can choose to keep your entire team, or just a certain amount of players, often just called a “keeper league” instead of a full dynasty.

2. Are you the only commissioner? Are you going to have multiple commissioners? This is a bit more tricky. If you’re all new to fantasy, it may be smart to have 1-3 commissioners to make sure situations are handled properly, or at the very least, to just have decision makers to talk through the nuts and bolts of your new league. It’s not uncommon for there to only be one commissioner who makes the decisions, creates the rules/bylaws/scoring setup etc., but that tends to be someone who’s done it before and is comfortable handling all the minor details of league management.

4. Roster Sizes/Starting Lineups: This setup is coming from the same league as the scoring setup listed for #3. The total roster size is 27 spots with 5 taxi squad players (which are typically players with less than 2 years of experience).

5. How many teams will there be in this league? Many, many moons ago, 10 teams were pretty normal, but most of the time today you’ll see at least 12 teams. The cool thing about starting at 12 is you can add owners as the league continues, and you also can start the league with as many teams as you want.

Here at RotoHeat, we have some 96 team leagues (which are super deep, with multiple conferences, and all sorts of wildness!) but for this article, we will focus on keeping it a bit more simple. In a standard redraft or dynasty league, it’s not uncommon to have 12-16 teams. As you are deciding, just keep in mind the more teams, the more strategy in roster building will need to be undertaken, as there are only 32 starting quarterbacks in the league!

6. Cost and hosting service: When I first started fantasy football, I kept track of things with paper and pencil, but with the change in technology years ago, sites like MyFantasyLeague.com, Sleeper, ESPN and Yahoo (among others) all have created fantasy platforms with varying levels of complexity. If you’re doing a redraft league, any of the bigger name brands are perfectly fine (and some free to use) to help keep your overhead low (if you choose to run the league free you could do so).

If you are going to charge to be in this fantasy league (which is a good idea because if people have skin in the game they tend to give it their all!), you can start low–say $20 bucks a team–and the winner gets the largest share, 2nd place gets the next largest share, and then you can determine if anyone else gets anything (ie: division winners get their money back, losers playoff bracket, etc.).

7. Create a league constitution and bylaws: It’s best to have a written document that explains everything from league costs and due dates to roster sizes, scoring setup, tanking (in a dynasty, this is where you purposely submit a bad lineup to get a higher draft pick), when the draft starts, and anything else the league may need to know. On your leagues website, there’s typically a message board and you can post these bylaws there. This way, everyone in the league has access to them if need be. These are the items typically covered in the document:

When you already have a league created, converting to superflex should be as easy as just modifying your rosters and starting lineups (potentially). After each season, I tend to ask my leagues if there are any changes they want to put to a vote (as long as they make the league better, as being the commish you have to make sure it’s not something detrimental to league health).

As you convert to Superflex, there may be other changes you want to try and institute, which is ok! If you are just adding a Superflex spot, you should be able to go into your roster settings and add more roster spots (or taxi squad spots) as needed to handle playing multiple quarterbacks weekly. You will also want to change the starting lineups to something similar to what I have pictured above, as that’s a standard RotoHeat Superflex league starting lineup.

How Do You Start a Superflex Fantasy Football League? Conclusion

Once you have done these steps, it’s doing your prep, figuring out your draft board (or just checking here at RotoHeat.com for our rankings) and getting ready for your league to start (unless your converting, then it’s just preparing for your Superflex rookie draft)! If you ever have questions, the team at RotoHeat is here to help! You can hit me up on Twitter or jump into our Facebook and Discord communities where you can get your questions answered by the whole team! Thanks again for checking out How Do You Start a Fantasy Football League!