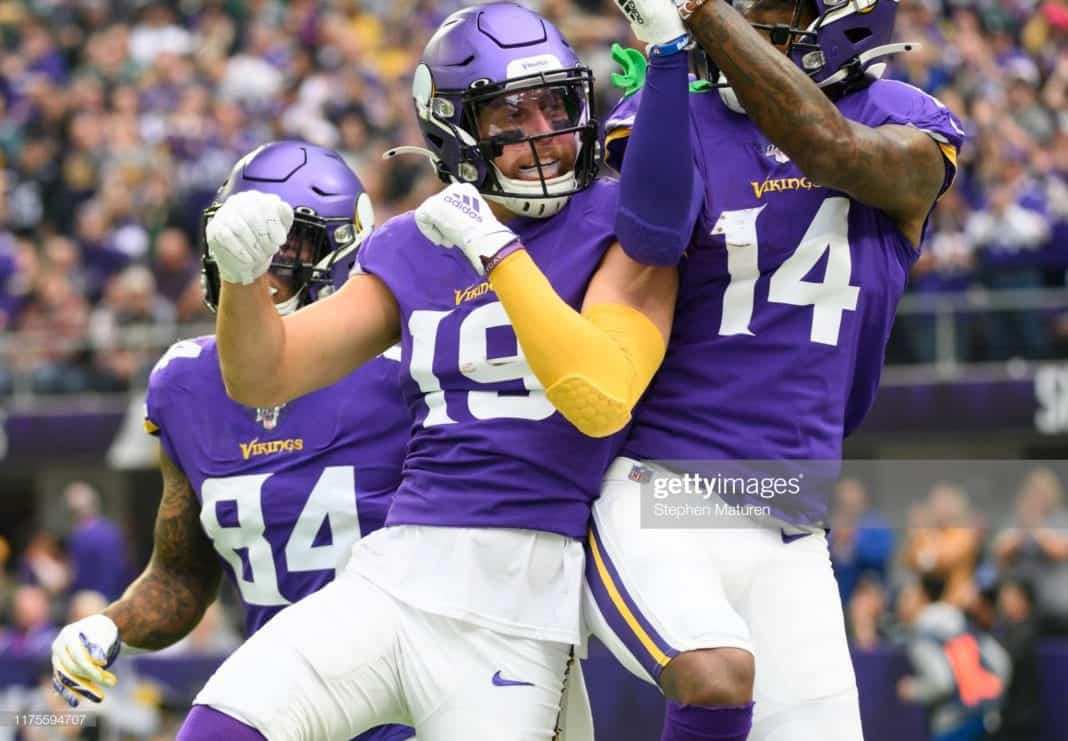 Week six enters Monday night and it was a week full of interesting and injury-filled results. There were some outstanding performances and some not so outstanding. This weekly piece reviews the top 5 and bottom 5 surprise performances of the week.

MINNEAPOLIS, MN – OCTOBER 13: Stefon Diggs #14 of the Minnesota Vikings catches the ball for a 62 yard touchdown in the second quarter of the game against the Philadelphia Eagles at U.S. Bank Stadium on October 13, 2019 in Minneapolis, Minnesota. (Photo by Stephen Maturen/Getty Images)

The 43.5 points this Sunday top the first 5 weeks of Diggs’ season (43.3), and catapult him up to WR18 from WR 57 in PPR scoring.  The Vikings wide receiver posted a monster line, catching seven of a team-high 11 targets for 167 yards with three touchdowns.

Diggs scored on plays in the first half that covered 51 and 62 yards, becoming the first player since Randy Moss in 2000 to post two touchdown receptions of 50-plus yards in one game for the Vikings.

I do believe the Vikings will continue to be aggressive with their play-action passing game moving forward. That fits the offensive structure in Minnesota to build out from the run game, and it also caters to quarterback Kirk Cousins.

GLENDALE, ARIZONA – OCTOBER 13: Matt Ryan #2 of the Atlanta Falcons looks to throw the ball against the Arizona Cardinals at State Farm Stadium on October 13, 2019 in Glendale, Arizona. (Photo by Norm Hall/Getty Images)

You know things are bad in Atlanta when franchise quarterback Matt Ryan can turn in the following stat line and the Falcons still managed to lose 34-33 to the Arizona Cardinals. Ryan finished 30 of 36 for 356 passing yards, four touchdowns, and zero interceptions.

The four touchdowns were tied for the second-most in Ryan’s career. He has now thrown for at least 300 passing yards in every game this season and that makes him tied for the longest streak of 300-plus passing games to start a season in NFL history.

Ryan remains a fantasy QB to own.  The Falcons are loaded with offensive weapons and are a hot bag of burning garbage on defense.  Ryan will have little choice to but to throw all game long just to give the 1-5 Falcons a shot a winning each week.  The 36 pass attempts were his second lowest of the season.  After 6 weeks of action Ryan is averaging 43 pass attempts a game.

When Henry suffered a tibia fracture after catching four passes for 60 yards in Week 1, it paused a potential breakout season for the former first-round pick who has been snake bitten by injuries since entering the NFL.

Henry beat his injury timetable and immediately returned to form in Week 6. Henry couldn’t be covered by the safeties and linebackers the Pittsburgh Steelers tried to throw at him. Henry set career highs with eight receptions, 100 yards receiving, and two touchdowns. He became the first Chargers tight end with 100-plus receiving yards and two touchdowns in a single game since Antonio Gates did it in 2010.

You would have to think that 31 NFL general managers are kicking themselves for letting Terry McLaurin slip into the third round of the 2018 NFL Draft.

McLaurin, like another former Ohio State wide receiver Michael Thomas (who slipped into the second round in 2016), was overlooked because he wasn’t a featured component of the Buckeyes’ offensive system.

After a two-touchdown game with four receptions for 100 yards during the Washington Redskins’ 17-16 victory over the Miami Dolphins in Week 6, no one will be overlooking McLaurin any longer.

GLENDALE, ARIZONA – OCTOBER 13: Kyler Murray #1 of the Arizona Cardinals looks over the defense prior to taking the snap from under center against the Atlanta Falcons at State Farm Stadium on October 13, 2019 in Glendale, Arizona. (Photo by Norm Hall/Getty Images)

The No. 1 overall pick in the 2019 NFL Draft continues to improve every week as a passer despite a shaky offensive line and limited talent at the wide receiver position around him. Simply put, he elevates the play of his teammates.

Murray went 27 of 37 for 340 passing yards with a career-high three passing touchdowns. He became the third rookie in NFL history to throw for 300-plus passing yards in three of his team’s first six games, joining Cam Newton (2011) and Andrew Luck (2012).

Murray also became the first rookie quarterback in the Super Bowl era to have 20 completions or more in each of his first 6 games. That Cardinals clearly have something special here with Murray. Kyler exits week 6 as QB7 with 130.36.

I am not sure what quarterback whisperer Bruce Arians has taught Jameis Winston this season but whatever it is, it has been forgotten. He was straight up awful on Sunday.  He finished 30 of 54 for 400 yards and a TD, with 5 INTERCEPTIONS.  In addition, he was sacked 7 times.

The turnovers have been part of a disturbing pattern for Winston throughout his career. He has five games with at least four turnovers, while no other player has more than two of those games since Winston entered the league in 2015. Winston had five turnovers in all, giving him an NFL-worst 86 in the past five seasons.

BALTIMORE, MD – NOVEMBER 18: Running Back Joe Mixon #28 of the Cincinnati Bengals carries the ball in the third quarter against the Baltimore Ravens at M&T Bank Stadium on November 18, 2018 in Baltimore, Maryland. (Photo by Patrick Smith/Getty Images)

Cincinnati Bengals running back Joe Mixon was nearly invisible in the loss to the Ravens on Sunday.

After rushing for a season-high 93 yards on 19 carries, in week 5, things appeared to be trending in the right direction for Mixon. However, after finishing with just 10 yards on eight attempts while scrounging up a few receptions, fantasy managers were left disappointed once again. With the team struggling, Mixon continues to get no support from the weak Bengals offensive line. He will try to get on track against the Jaguars in Week 7, but at this point, I wouldn’t count on it.

Jared Goff went 13 of 24 for a career-low 78 yards in week 6. Goff entered the week with a combined 912 passing yards in his previous two starts. The Rams didn’t manage a completion longer than 12 yards while going 0 for 9 on third down.

Goff sits at QB17 behind Kyle Allen at 16 and one spot up on Marcus Mariota at QB18.  One QB didn’t get the job until week 3 and the other just lost his.  Goff looks lost at times for the Rams this season.

Kupp can into Week 6 sitting as the third highest scoring wide receiver on the season.  He had averaged 23.18 PPR points a game in 2019.

In week 6 Kupp, caught 4 of his 6 targets for 17 yards.  Kupp like the rest of the Rams offense was at the mercy of the tenacious San Francisco 49er defense all day Sunday.

The 5.70 fantasy points Cooper Kupp scored were his lowest of the season and the lowest since his 1.2 he posted in an jury shortened effort in week 6 of 2018.

The loss of Mike Pouncey for the season with a neck injury may turn out to be the most costly injury of the season for Los Angeles and with all the injures they have had to endure this season that’s saying something.

The injury resulted in players playing out of position and it showed.  As a result the running game and passing game were rather disastrous in week 6.

Melvin Gordon and Austin Ekeler were held to 13 carries for 32 yards. Ekeler carried the ball 5 times for 14 yards and Gordon went for 18 yards on 8 carries.

Gordon Ekeler combined for 13.6 PPR points, Ekeler entered week 6 averaging 25.86 points per game on his own.