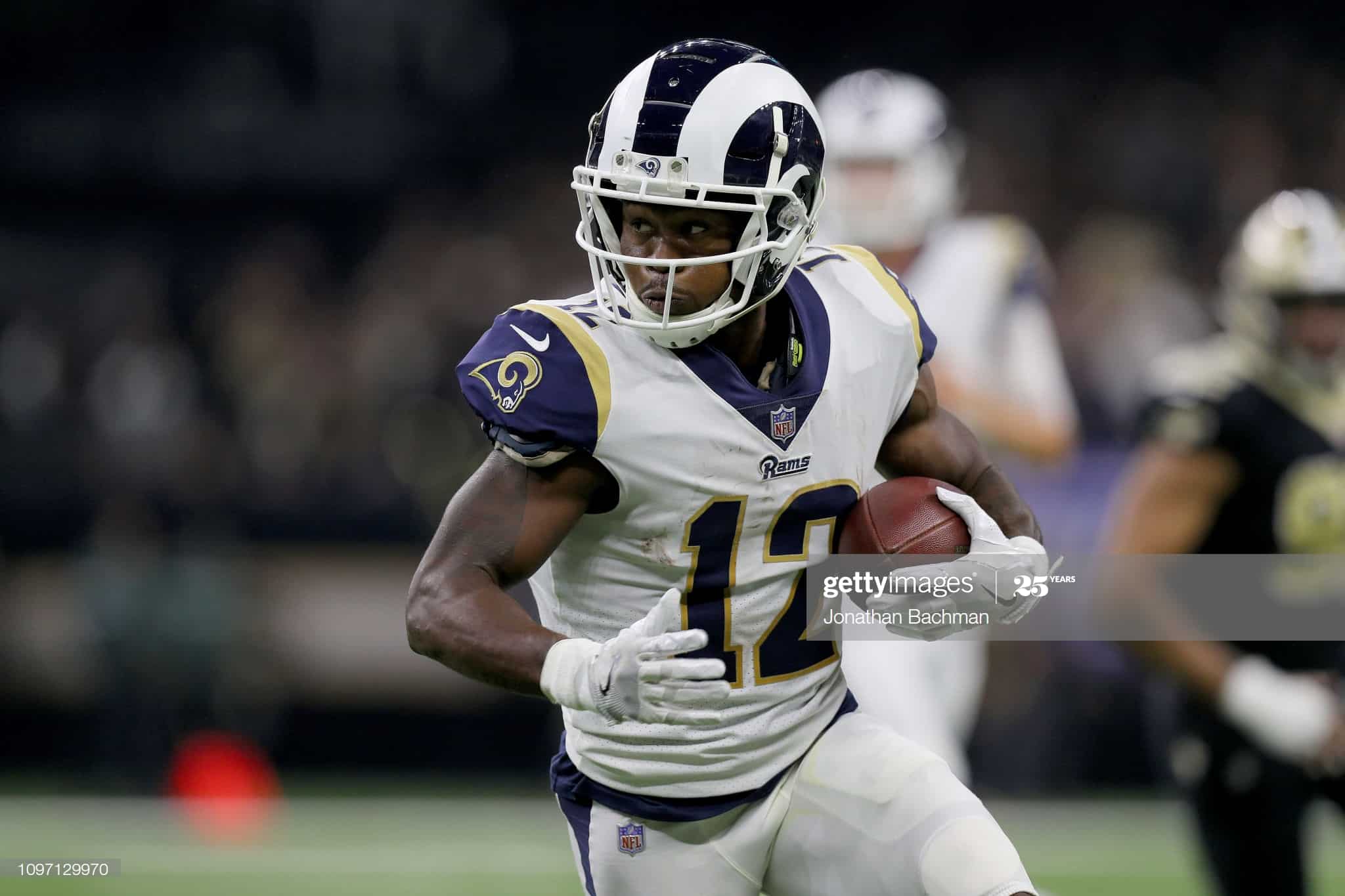 On May 9, 2020, the Houston Texans acquired WR Brandin Cooks and a 2022 fourth-round pick from the Los Angeles Rams in exchange for the #57 overall pick of the 2020 draft. It’s an interesting deal for both clubs and as a result, it’s worth investigating the fantasy impact of the Brandin Cooks trade.

Brandin Cooks has played six years in the NFL and as a result of this trade will be joining his fourth team. The New Orleans Saints drafted Cooks in the first round in 2014. They then traded him to the New England Patriots in 2017 for a 1st and a 3rd round pick. After one season in New England, he was sent to the Los Angles Rams along with a 4th round pick for a 1st and a 6th round selection .

After averaging 77 receptions, 1,150 yards, and 7 touchdowns from 2015-2018, Cooks finished 2019 with 42 catches for 583 yards and 2 touchdowns. 2019 was his worst statistical season since his rookie year in 2014. Injuries played a part in his down year, as he suffered a concussion which was the fifth documented in his career and limited him to 14 games.

Cooks was brought in to fill the hole in the Texans offense that was created by trading DeAndre Hopkins to the Arizona Cardinals last month. The move should give him a slight boost in fantasy production. Hopkins left behind 150 targets, and while Cooks won’t see all of them, he will be the primary target in their attack.

Cooks joins often injured Will Fuller and Keke Coutee, as well as Kenny Stills and Randall Cobb. If Cooks can stay healthy, it impacts the fantasy value of Stills. Stills and Cooks have a similar skill set and a healthy Cooks has much more talent than Stills. In three wide receiver sets, Stills is likely watching from the sidelines. Cooks will also cannibalize some of Fuller’s targets since both players tend to do their damage downfield.

So while this trade helps Brandin Cooks’ fantasy value, Fuller’s fantasy potential is now somewhat capped in the same range. Cooks will be ranked higher in my rankings, but I wouldn’t be overly excited about either player being more than a boom-or-bust WR3 option. The addition of Cooks has a negative impact on Cobb, as targets in the slot may now be direct towards the outside. Keke Coutee had little fantasy value once Cobb arrived in Houston, and now with another pass catcher in town, he is virtually worthless.

The player that benefits the most in this trade other than Cooks is Deshaun Watson. Although he no longer has the elite option that Hopkins is as a weapon, he does have some nice depth to work with. With Cooks, Fuller, Stills, and newly acquired David Johnson, Watson should maintain his spot in the top 3-5 quarterback range.

Cooks’ role in the Rams offense was on the decline with the emergence of Cooper Kupp and Robert Woods over the last two seasons as well as Tyler Higbee towards the end of 2019. I expect the move to create an opportunity for Josh Reynolds. Reynolds performed well in the 3rd receiver role in recent years when filling in for the injured Cooks.

Cooks’ departure highlights the Rams’ lack of a downfield threat in the passing game. Jared Goff tied for 28th among quarterbacks last season with an average depth of target of 8 yards downfield. This was driven in part by Cooks missing time, but mainly was a product of a poor pass blocking offensive line. As of today, the Rams have not addressed their offensive line so I would expect more of the same from Goff in 2020. A low aDOT typically means a lower fantasy ceiling.

Tyler Higbee, and to a lesser extent Gerald Everett, will benefit. Higbee became the focal part of this Rams offense in the later stages of 2019, and he carries top-12 TE status into 2020. Everett was the primary pass catching TE prior to his knee injury last season. He will still hold some value, but it’s capped by Higbee.

In terms of the Rams’ wideouts, Cooks’ departure doesn’t change much in terms of Woods and Kupp. Woods remains in the WR2 conversation, and Kupp in the WR1 conversation. Reynolds is a WR4/5 guy, but with an injury to Woods or Kupp could see a dramatic lift in his fantasy value.

When the Rams released Todd Gurley, it opened up opportunities for both Darrell Henderson and Malcolm Brown. Although that remains the case, the most interesting part of this deal from the Rams perspective and potentially for fantasy is that #57 overall pick. With Brown entering his age 27 season and Henderson being wildly ineffective in his rookie season, look for the Rams to add running back with pick #57.

There should be plenty of the top rated running backs available to choose from.