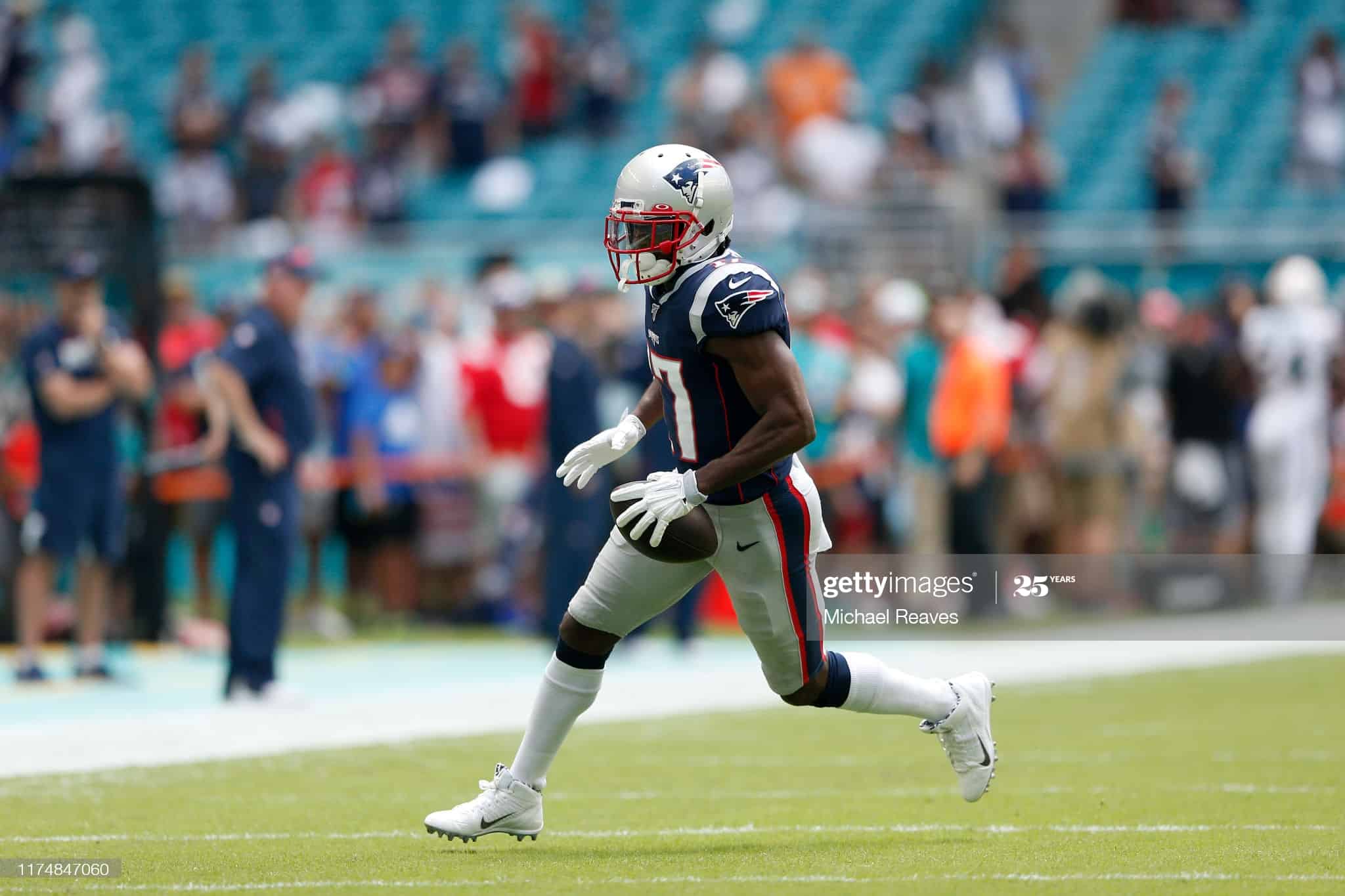 We are entering Week 9 this week and as a result we are at the unofficial midway point of the fantasy season. Clearly this has been a wacky season with the impact of the Covid-19 Pandemic and the massive amount of injuries to key fantasy assets.

I have a Fantasy Football Midway Point Top 12 series currently on our RotoHeat website. I am reviewing the top 12 at each position and giving my 2 cents on where I see them finishing at seasons end. In the process of putting these pieces together I have come across some surprises in these positional rankings.

At the QB position, Joe Burrow and Justin Herbert are two pleasant surprises. On the flip side Lamar Jackson and Ben Roethlisberger have been a disappointment. Burrow has looked great averaging 19.36 fantasy points a game, and Justin Herbert has looked even better with his 25.33 point average. Herbert has played 2 less games than Burrow and is only 2.88 points behind him.

In terms of Lamar Jackson, what can I say he is QB14 with an average of 20.69 points a game. I ranked Jackson as QB2 entering the season, I really wanted to move him to three behind Dak Prescott but I didn’t have the stones to do it. Lamar Jackson season to date has scored 5.18 more fantasy points than Dak, and Dak hasn’t played since the middle of Week 5. Big Ben what can I say I thought he would be better. He is QB22 averaging 17.67 points a game. I ranked Ben at 14 in the preseason and expected much better.

In terms of the running backs, Mike Davis and James Robinson have been a fantasy blessing and Kenyan Drake and rookies not named Clyde Edwards Helaire have been a disappointment. Wide Receiver there is no bigger surprise to me than Robby Anderson. The rookie class has been a pleasant surprise as well. On the disappointing side, Mike Evans at WR19 and Juju Smith Shuster at WR29 have let their managers down.

The Tight Ends, Robert Tonyan came out of nowhere and Rob Gronkowski is the Undertaker coming back from the dead. Honorable mention to Jimmy Graham who thinks this is 2012. Mark Andrews is killing me this season and Tyler Higbee’s productivity this season is why I feared him entering my drafts.

Alright different week same drill, 2 starts and 2 sits at each position and we fire this up with the Quarterbacks.

Tom Brady has re-emerged as one of the top quarterbacks in fantasy land, and he’s a virtual must-start when the Buccaneers host the Saints in a battle of Hall of Fame quarterbacks. New Orleans has been vulnerable to the position, as a total of six QBs this season have scored at least 19.2 fantasy points against them. That includes three who have scored at least 22 fantasy points. An added motivation for TB12 is the all-time passing touchdown record that Brady and Brees are passing back and forth. Brady is up by one 561-560 and will want to keep it that way. Brady should be in your fantasy lineups once again in what figures to be a high-scoring affair.

Roethlisberger has been on a bit of a garbage fantasy streak lately, scoring 15.3 or fewer fantasy points in three straight games. Luckily, the Cowboys are the perfect cure for any and all QBs. Carson Wentz was a disappointment against them in Week 8, putting up 10.62 points. Despite that effort, quarterbacks have still averaged more than 19 fantasy points per game against Dallas this season. The undefeated Steelers should have their way with the Cowboys, and Big Ben is a good bet to score 18-20 plus in this one.

Bridgewater has been a viable matchup-based starter in fantasy leagues this year, but an upcoming matchup at Arrowhead Stadium against the Chiefs makes him a fade. Kansas City has been tough on quarterbacks, allowing the sixth-fewest points to the position. That includes holding Lamar Jackson and Josh Allen to fewer than 15.1 points apiece. Bridgewater, who took a big hit last week and missed part of the game against Atlanta, should be off the radar in traditional re-draft leagues.

Jones has looked better in recent weeks, but he’s still no more than a Superflex league option. That’s especially the case this week, as Jones faces a Washington defense that’s been tough on quarterbacks. The position had averaged just 205.7 passing yards against them, including a 112-yard stinker from Jones when these two teams met in Week 6. The Football Team has also held the likes of Baker Mayfield and Carson Wentz to fewer than 14.5 fantasy points in 2020.

NASHVILLE, TENNESSEE – OCTOBER 18: Running back David Johnson #31 of the Houston Texans runs with the ball in the second half of their game at Nissan Stadium on October 18, 2020 in Nashville, Tennessee. The Titans defeated the Texans 42-36 in overtime. (Photo by Frederick Breedon/Getty Images) Fantasy Football Week 9 Start and Sit

Johnson hasn’t put up monster numbers, but he’s averaging 13.3 fantasy points and has been a mid-tier No. 2 runner in most weeks. He’s also getting nearly 17 touches per game as the top back in Houston’s offense. Johnson should be good for 14-plus points this week as he travels to Duval County to face the Jaguars. Their defense has been bad against running backs, allowing an average of more than 150 scrimmage yards and the fifth-most fantasy points to the position.

Gibson looked like a fantasy superstar before Washington’s bye week, scoring 18.8 fantasy points in a win over the Cowboys. I’d keep him active this week too, as the Football Team hosts the Giants in an NFC East battle. New York’s defense has struggled against running backs, as five players at the position have scored at least 16.7 points against them. That’s good news for Gibson, who leads his backfield in snaps and touches while averaging more than 13 fantasy points per game.

Singletary wasn’t bad in the stat sheets last week, rushing 14 times for 86 yards in a win over the Patriots. However, he played fewer snaps than Zack Moss and was a distant second to his rookie teammate in red-zone looks (6 to 1). While I don’t see Moss taking over the top spot and becoming a true featured back, his usage is a problem as it pertains to Singletary’s value moving forward. So while a matchup against the Seahawks isn’t bad on paper, I’d be fading Singletary this week.

Edwards looked good in last week’s loss to the Steelers, rushing for 87 yards on 16 carries while also finding the end zone. Still, he did play far fewer snaps than J.K. Dobbins (Edwards missed some time in the game), and he’ll give fantasy fans next to nothing as a pass-catcher. Couple that with a matchup against the Colts, who have one of the best run defenses in the league with LB Darius Leonard in the mix, and I’d beware of Edwards this week. If you start a Ravens back, it’s Dobbins for me.

He’s back! Brown has played in one game since December 2018, but we know he’s in great shape and motivated to make some noise in this return to the gridiron. We also know he has a rapport with Tom Brady, and the potential absence of Chris Godwin (finger) means targets will be available in what could be a shootout against the Saints. Their defense has allowed an average of more than 170 yards and 11 touchdowns to wide receivers, so the matchup is right for Brown to find success.

Chark has struggled in recent weeks, scoring a combined 19.7 fantasy points in his last three games. While some might consider the move from Gardner Minshew to Jake Luton a positive for him, it’s tough to gauge what kind of rapport (if any) Luton has with his receivers, including Chark. The only players lined out wide to succeed against the Texans this season are superstars like Davante Adams, A.J. Brown, and Adam Thielen. At best, Chark will be a risk-reward flex starter.

Parker found the end zone last week in the first NFL start of Tua Tagovailoa, but it was one of his mere two targets in the game. The Dolphins offense is a lot different without Ryan Fitzpatrick under center, and it’s not a big difference either. It’ll be tough to trust any Miami receivers until Tagovailoa shows some signs of life in the passing game. So while this week’s matchup against the Cardinals isn’t terrible on paper, starting Parker is suddenly a lot less attractive for fantasy fanatics.

Hockenson continues to produce nice totals for fantasy fans, as he hauled in seven of 10 targets for 65 yards in last week’s loss to the Colts. He has now produced at least 9.3 fantasy points in every game this season, and his 12.4-point per game average looks good at what has been a tough position to fill. This week’s matchup looks good too, as the Vikings have allowed four tight ends to score 11-plus points. Hockenson should also see more targets with Kenny Golladay sidelined.

Gronkowski has re-emerged into a solid fantasy option since the Bucs lost O.J. Howard, and this week’s matchup against New Orleans makes him a virtual must-start. The Saints have struggled against opposing tight ends, allowing six scores and the third-most fantasy points to the position. Furthermore, their defense has given up 10-plus fantasy points to five different tight ends, including one (Darren Waller) who scored nearly 30 points. Gronkowski is in a smash spot this weekend.

Hurst has been pretty reliable for fantasy fans in recent weeks, scoring at least 10.4 fantasy points in three straight weeks. That will keep him active in most leagues, but I’d beware of this matchup against Denver. Their defense has been tough on tight ends, as just two players at the position have scored more than 10 points against them, and none have put up more than 13.6 points. Sure, Hurst could see more targets without Calvin Ridley, but I would still temper expectations.

Gesicki has been very frustrating for fantasy fans this season, as he’s scored more than eight points just three times and has four games with six or fewer points. That includes Gesicki scoring a combined 1.8 fantasy points over the last two games. Tua Tagovailoa barely threw the football in his first NFL start, and the Cardinals have allowed just one tight end (Jesse James of all people) to score more than 9.3 fantasy points against them this season. Gesicki is a fade for me in the desert.

That’s going to do it for today’s episode, thank you for reading Fantasy Football Week 9 Start and Sit.

Please be sure to subscribe to the RotoHeat YouTube channel and hit the notification bell when you do so that you do not miss any of our great content on YouTube.  Brad Menendez is a work horse bringing you player profiles as well as his weekly start/sit videos.  Brad is also the host of the Fantasy Inferno Live Stream Wednesday nights at 9:30 EST with Bryce Frazier and myself.

I will be back next week with my Week 10 Start and Sits.  Until then, good luck in week 9, stay safe and stay healthy Heat Seekers.

139 – The Fantasy Impact of a Julio Jones Trade