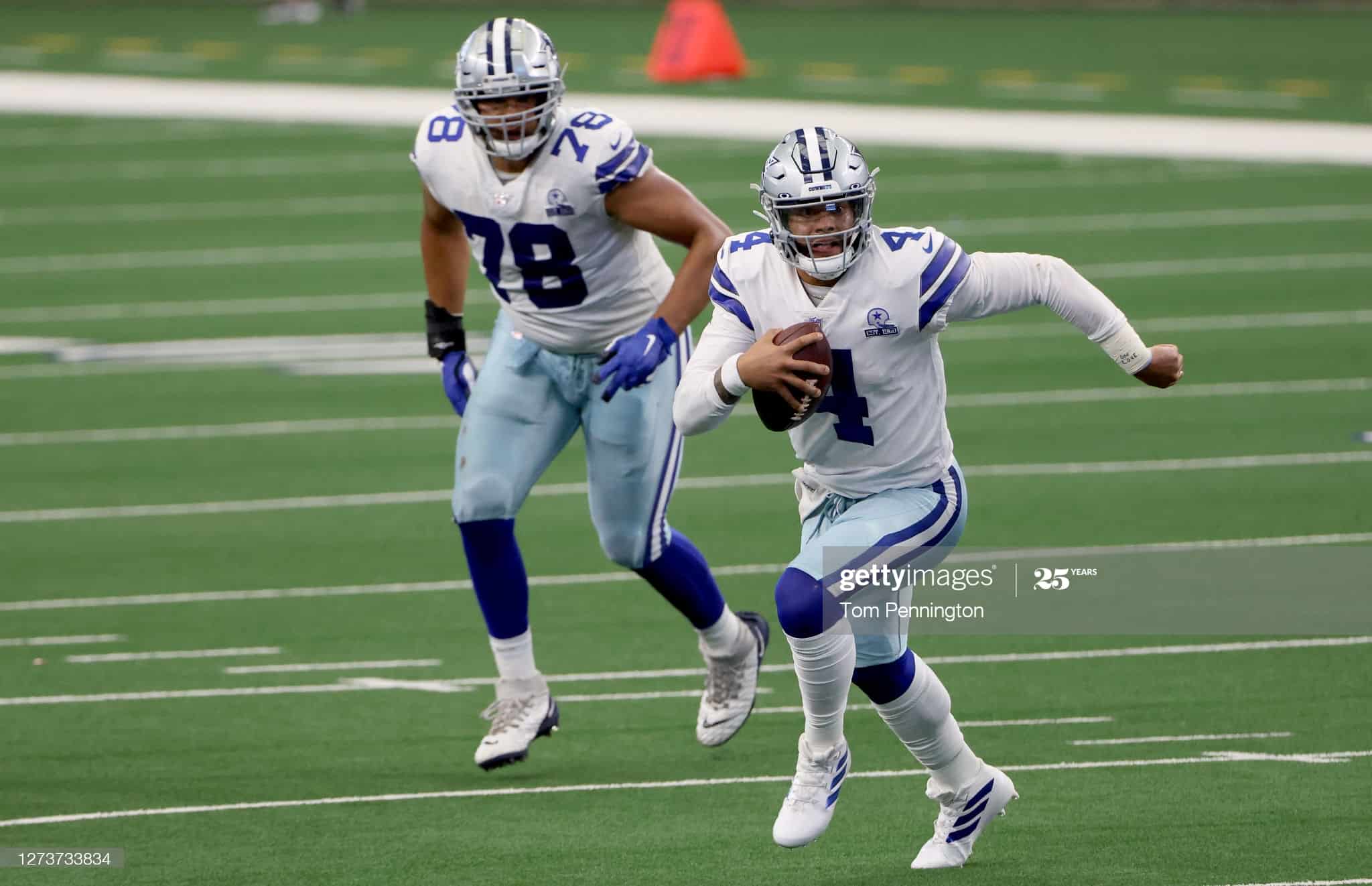 With the final whistle on Monday Night Football, we have reached the quarter pole of the 2020 NFL Season.  A season unlike any we have seen before. Injures have ravaged our fantasy players, and the Covid-19 Pandemic has cost us a game.

All teams with the exception of the Pittsburgh Steelers and the Tennessee Titans have completed 4 of their 16 games. Here is a look at the Quarterbacks after 4 weeks compared to my preseason rankings, as well as my end of season rankings- enjoy!

In 2019, the Dallas Cowboys led the NFL with 6904 yards of offense, were 2nd in league in passing yards and 5th in rushing yards. Fast forward to the 2020 season, and the Cowboys added CeeDee Lamb, and their defense lost Byron Jones. Four games into the season it appears that the offense is as good as the defense is bad. The Cowboys need to score 40 a week if they want a chance to win. This is bad for Dallas and great for Dak Prescott’s fantasy value. Prescott is currently on pace for 6760 passing yards, 36 touchdowns and 500.80 Fantasy points.

#LetRussCook for years has been a plea to Pete Carroll to take the restrictions off Wilson. To lessen the coach’s long-standing reliance on the running game in order to accentuate the team’s best asset Russell Wilson. The Seahawks are 57-0 when leading by four or more points at halftime since Wilson took over as starting quarterback in 2012. Last year in many ways was a historical outlier; they won six games when trailing at halftime — tied for the second-highest total of any team since the 1970 merger. Russ is cooking thru 4 games this season and there is no sign of him closing the kitchen anytime soon. He is the quarter pole league MVP and a fantasy stud.

LAS VEGAS, NEVADA – OCTOBER 04: Quarterback Josh Allen #17 of the Buffalo Bills calls a play against the Las Vegas Raiders at the line of scrimmage during the first half of the NFL game at Allegiant Stadium on October 4, 2020 in Las Vegas, Nevada. The Bills defeated the Raiders 30-23. (Photo by Ethan Miller/Getty Images) Fantasy Football Quarter Pole Top-12 Quarterbacks

I was wrong when I ranked Josh Allen this preseason. My thought process was, that Allen would throw more and run less after the team traded for WR Stefon Diggs and drafted RB Zach Moss. Well he is throwing more, but what I didn’t see coming is he is completing 70.9% of his attempts. Allen entered this season with a career 56.3% completion rate. Allen and the Bills offense look legit thus far and playing in the AFC East is never a bad thing.

Kyler Murray is attempting to make it three straight seasons in which a sophomore quarterback is named the league MVP. Last season’s Offensive Rookie of the Year is averaging over 27 fantasy points a game season to date. His rushing ability is the difference. Murray has ran for 265 yards and 4 scores so far this season. Often he has looked like a human joystick breaking defenders ankles in the open field.

You know you are the best quarterback in the game when you throw for 1134 yards and 11 touchdowns in 4 weeks and it’s almost perceived as a disappointment. In fairness when Mahomes drops a 40 burger like he did in Week 3, he continues to raise the bar for himself. He is averaging 27.04 fantasy points a game and it doesn’t seem like the Chiefs are firing on all cylinders on offense. When they do, look out!

When the Green Bay Packers made the decision to draft Arron Rodger’s replacement (Jordan Love), over receiving weapons for thier franchise QB, it appeared that the writing was on the wall for Rodgers in Green Bay. Well, to steal a line from Mark Twain, the reports of my death have been greatly exaggerated apply to Aaron Rodgers fantasy value. Rodgers through four games appears to be on his own “Eff you all Tour”, and is playing as well as I can remember.

First off, Tom Brady looks odd in that Bucs uniform. I am not sure I will ever get used to it. He also has been incredibly average season to date. On the surface his numbers look good. He has thrown for 1122 yards and 11 touchdowns with 4 interceptions. When you look more closely he has looked his age and his offensive weapons are falling by the wayside each passing week. Brady’s numbers look a lot better thanks to Week 3’s 369 yard 5 TD performance. It’s hard to project the rest of his season. He is on pace for the 6th most passing yards, second most TD passes and highest interception totals of his career.

LANDOVER, MARYLAND – OCTOBER 04: Quarterback Lamar Jackson #8 of the Baltimore Ravens rolls out to pass against the Washington Football Team in the first quarter at FedExField on October 04, 2020 in Landover, Maryland. (Photo by Rob Carr/Getty Images)

I was banging on the regression drum in terms of Lamar Jackson this offseason and I was certainly not alone. His TD rate last season was never going to reproduced (9%), and I expected his rushing totals to decline dramatically from the league record 1206 yards he posted in 2019. Now, try as hard as I could, I couldn’t possibly rank him any lower than QB2. Jackson recorded 421.68 fantasy points in 2019 and is currently on pace to finish with 341.12 in 2020. Jackson will be better the remainder of the season but a repeat as the top fantasy QB in the game is not happening.

I like Ryan Fitzpatrick the QB. The dude is fun. I do not however really like Ryan Fitzpatrick the fantasy QB. There is far too much inconsistency for me to buy in. In four games this season he has throw for 191, 328, 160, and 315 yards. His fantasy weeks thus far this season have been QB32, QB11, QB6, and QB10. He has been a viable starting QB so far this season and likely remains a viable starter in Super-flex leagues the remainder of the season, or until he is replaced by rookie QB Tua Tagovailoa. After all the Dolphins are 1-3.

Speaking of quarterbacks I like, Gardner Minshew is high on the list. Unlike Ryan Fitzpatrick I like the fantasy upside of Minshew as well. The Jaguars are not a good football team and as a result Minshew will be forced to chuck it all over the yard on a weekly basis. He has preformed well this season and he is averaging just under 20 fantasy points a game. I don’t see the moustache finishing the season as a top-12 QB, but I also don’t see him missing it by much. You could do a lot worse at QB that Gardner Minshew.

When comparing Joe Burrow to NFL quarterbacks that have come before him this offseason I comp’d him to Andrew Luck. Now I am fully aware that there are a large majority of individuals that questioned my sanity when I did so. He is the thing, Joe Burrow is legit and as long as the weak offensive line in Cincinnati doesn’t get him killed, he is going to have a longer and prosperous career.

Matt Ryan is a darn good NFL quarterbacks and turns out he’s not too shabby of a fantasy QB either. Yet another QB that benefits from being in an offense with solid weapons and on a team with a terrible defense. As long as the Falcons have the same coaching staff (which could change any day), they will be a team that throws a ton. Winning or losing they are pass heavy. Ryan needs a healthy Julio Jones to really put it all together, but has some of the best secondary weapons he has ever had in that offense as well. He will do enough to end the season as a top-12 QB once again in 2020.