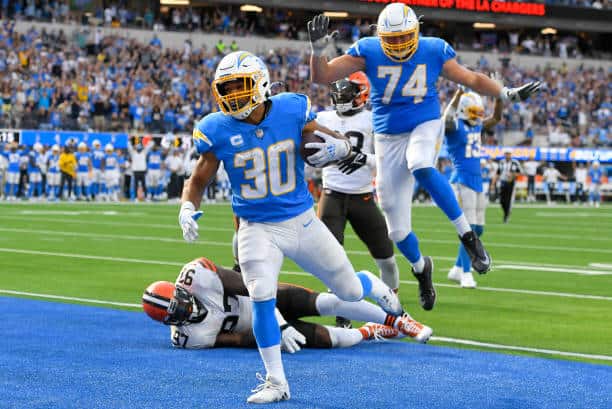 We are almost a third of the way through the fantasy football season! Which players are starting to get in the groove of things and which are not? Let’s dive into this week’s hot and cold players to find out.

Austin Ekeler is on absolute fire so far this season. He now has 4 consecutive weeks with over 20 fantasy points and finished this week with over 30 points. This Justin Herbert-led Chargers team has been electric so far this season with Ekeler’s dual threat ability and the offense scoring at will, and it has led to him being the #2 RB this season. Look for Ekeler to continue his fantasy production as long as that offense is clicking.

Claypool finally put up a 20+ point performance this week, and with JuJu being out the rest of the year we can expect to see an uptick in volume and production for Claypool. It is no coincidence his best 2 performances this year happened when either JuJu or Diontae were out. He is on back-to-back 18+ point games. He missed Week 4 due to an injury, and as long as he’s healthy, Claypool may sneak into a top-12 WR this season.

Taylor is on back-to-back 20+ performances heading into Week 6. His size and speed makes him the perfect back to bust out big plays but also punch it into the end-zone from the goal line. He is able to stay fresh all game with the involvement of Nyheim Hines. Taylor is seeing an average of just under 17 touches per game which will keep him fresh for middle and late season. Look for him to continue to put up consistent numbers with big games sprinkled in there like we saw against the Ravens on Monday night.

A.J. Brown has been a huge disappointment this year to fantasy owners. He was many times drafted to be a team’s #1 WR and has not even played good enough to be a flex player thus far. It seems like Brown should have that big game, but with how heavily the Titans lean on the run game and his inability to make any big plays, he is a guy I am seriously concerned about until he proves otherwise.

Ruggs showed a little bit of promise in Weeks 2 and 3, but since then has put up less than 10 points 2 weeks in a row. He is being heavily out-targeted by both Waller and Renfrow, and there is no indication of that changing. Ruggs is a typical boom-or-bust play and is a guy i’d plug into my line ups when those dreadful bye weeks come for some major players. At least then you can hope for one of the boom weeks.

Stafford and that Rams offense came out the gate hot to start the season and have since come back to Earth. Stafford has been putting up mediocre numbers recently, and with the weapons around him, that could easily change. He has been missing some big throws we saw him make in the early weeks. Matt Stafford is a guy we are still starting in our lineups, but this could be a time to attempt to sell for a bigger name guy in case these numbers continue to disappoint. He is QB16 over the past two weeks.