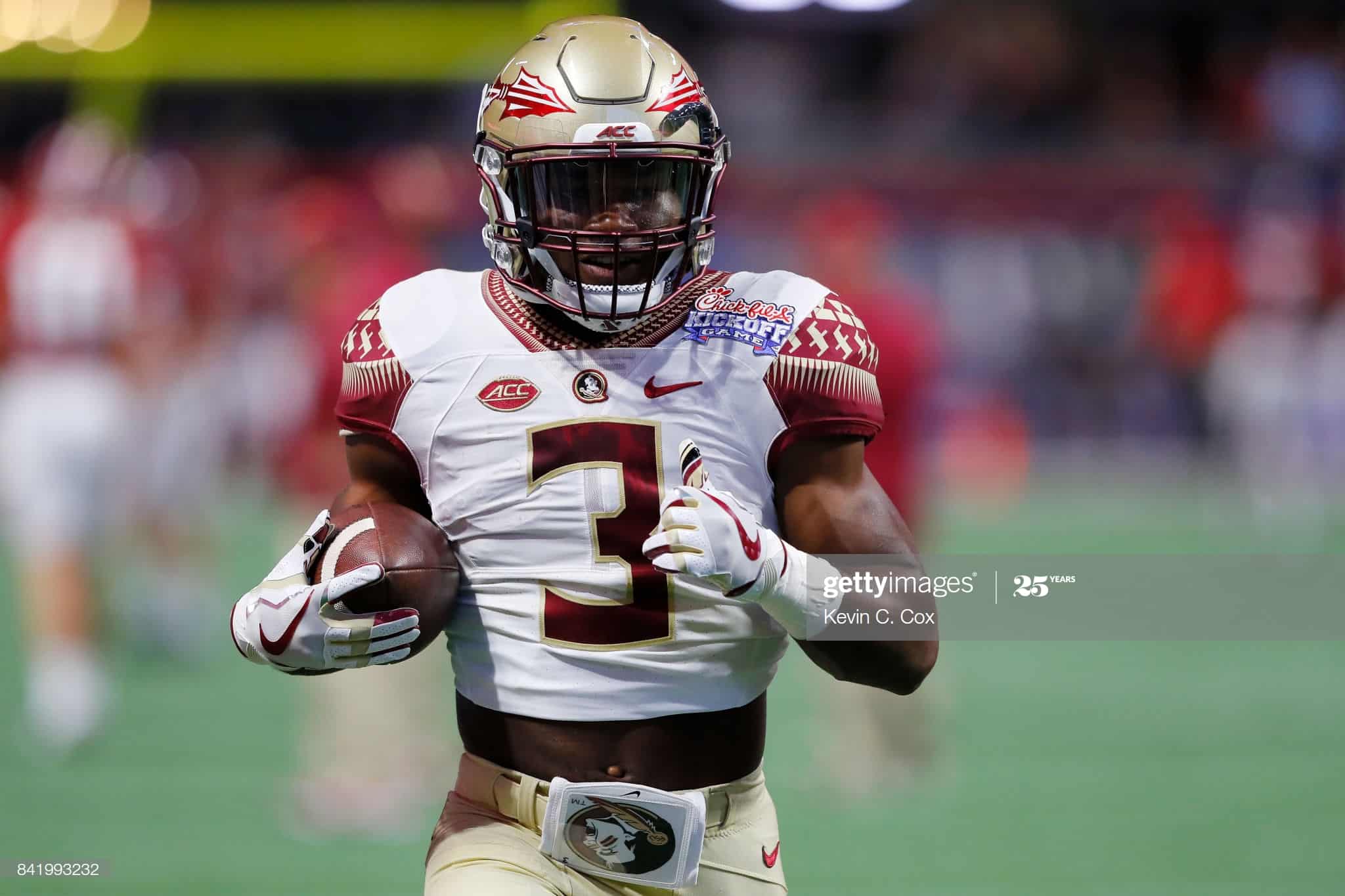 In the second installment of this 8-part series we review the Fantasy Draft Grades in the NFC West.

I am not an IDP specialist my any means ( I’ll leave that to out own Brad Menendez), but I am a massive fan of Isaiah Simmons. In my opinion, Simmons is one of the best players in this entire draft class. The Cardinals were wise to select him when he fell the the 8th overall pick.

The pick does not address a major need for Arizona, but it was a chance to add supreme, diverse talent. The question is, Where will he play? We know the Clemson star can operate at almost any position. The Cardinals themselves may not yet fully know, though they wouldn’t have drafted Simmons No. 8 overall if they didn’t have a plan. Pairing him with Budda Baker gives Arizona two dynamic movable pieces which will help a defense that has struggled mightily going forward.

Offensively, if we treat DeAndre Hopkins as Arizona’s second-round pick, that boosts their draft by a whole letter grade. It shouldn’t be a bad grade to begin with considering they found a new right tackle in Josh Jones. The third round is much later than many expected the Houston product to go. With Marcus Gilbert being 32, having some injury history and entering the final year of his contract, Jones was a no-brainer selection for Cardinals GM Steve Keim.

Eno Benjamin is an interesting selection and worth a flyer in the 7th round. It’s a somewhat interesting pick when you consider that Kenyan Drake is on a one year deal.

I like Eno Benjamin, and I the love 7th round value on him. He’s highly competitive and while not being the most powerful runner, his ability to shake and bake out of tackles is exciting, and his projection to catching the football out of the backfield at the next level is favorable. He will need to make significant improvements in pass protection or that will limit his utilization in the NFL. In fairness, you can say the same for a whole lot of rookie backs selected much higher than Eno. Benjamin is a change of pace back that gets chances to catch the football and is used on gap runs. He holds more fantasy value than the prototypical 7th round selection.

With their first-round selection gone as part of the Jalen Ramsey trade, the Rams waited until Pick 52 to make their initial selection. With that selection the Rams added Florida State running back Cam Akers.

During his three years at FSU, Akers ran behind one of the worst offensive lines in all of College football. His College training will serve him well in LA, as the Rams went from being the league’s best run-blocking unit in 2018 to 26th in 2019.

Last year, the Rams traded up to select Darrell Henderson and matched an offer sheet from the Detroit Lions on Malcolm Brown. Of course in 2019 the #1 back for the Rams was Todd Gurley. With Henderson showing he is not ready for a full-time role in 2020, and Malcolm Brown entering the final year of his contract, the Rams used their first pick on a more direct replacement for Todd Gurley.

The Rams expect Akers to compete for a starting job right away. Cam Akers was outstanding at Florida State, displaying an understanding of how to read defensive fronts. If that translates to the NFL, he’ll be a perfect fit in Sean McVay’s outside zone running game. This wasn’t the Rams biggest need, but they landed themselves a very good running back and created a nice fantasy asset in the process. Akers should be a top 5 rookie draft selection in 1QB formats and top 8-10 in Super-Flex drafts.

LA also added a receiver who fits the passing game in Van Jefferson. What LA liked the most about Jefferson is his route running ability. I like Jefferson, but selecting him in round 2 and ignoring more pressing needs was a mistake. Selecting Jefferson ahead of Baylor’s Denzel Mims will also impact their draft grade here. They still had two 3rd round selections and would have been better served to address that offensive line or the linebacking core in the second round.

On the surface the 4th round selection of Purdue TE Brycen Hopkins, seemed odd with Tyler Higbee and Gerald Everett in house. Everett however is entering the last year of his deal with LA, and the addition of Hopkins likely provides the Rams with his replacement. I don’t mind the selection, but once again it is at the expense of much bigger needs.

The Rams finally addressed their opportunity on the offensive line by selecting Clemson G Tremayne Anchrum. Anchrum started at right tackle for the last two seasons with Clemson. Though there are questions and concerns about Anchrum’s viability at the next level, there’s reason to believe he hit the jackpot with the franchise that selected him, and as a result he’ll be able to compete for a starting position right away, that’s how bad the Rams needed to address this line.

TEMPE, ARIZONA – AUGUST 29: Wide receiver Brandon Aiyuk #2 of the Arizona State Sun Devils runs with the football en route to scoring on a 77 yard touchdown reception against the Kent State Golden Flashes during the second half of the NCAAF game at Sun Devil Stadium on August 29, 2019 in Tempe, Arizona. (Photo by Christian Petersen/Getty Images) Fantasy Draft Grades – NFC West

I thought the 49ers were a little Jekyll and Hyde in the first round. They started off with a solid move, sliding back from the 13th overall selection to the 14th in a trade with the Tampa Bay Buccaneers. The Niners sent picks 13 and 245 to Tampa for 14 and 117. San Francisco obtained pick 13 as part of an offseason deal that sent DeForest Buckner to Indianapolis.

Many expected the Niners to find a replacement for departed wide receiver Emmanuel Sanders at Pick 14 when every wide receiver, except for Henry Ruggs III, was still on the board. Instead, the 49ers opted to use pick 14 to grab Javon Kinlaw, DT, South Carolina, to fill the void on the defensive line that was left by the departed Buckner. By all accounts it would appear the Niners made a great move here.

In an ill-advised move later in the first round Niners traded up to 25 with Minnesota, and selected Brandon Aiyuk, WR, Arizona State. I like Aiyuk, and by all accounts he’s a Kyle Shanahan type of talent. The issue I have with the move is the deal cost San Francisco a 4th and 5th round selection for a player that would likely still have been there at pick 31 that they flipped to the Vikings.

The fact that the Niners traded up get Aiyuk says they must really like the Arizona State star. Stylistically, he fits their offense. Scouts liked Aiyuk’s effectiveness operating on the move, which is a key characteristic in Shanahan’s timing-based offense. He also has shown he can align in a variety of positions.

Shanahan and GM John Lynch understand that as long as they have quality route runners on the field, Shanahan’s play designs can win. They displayed that in 2019 with how they utilized Deebo Samuel. San Francisco now seems to have three very similar assets in Aiyuk, Samuel and 2019 third-rounder Jalen Hurd, who missed his rookie season with a stress fracture in his low back.

TE Charlie Woerner was added in the 6th round and WR Jauan Jennings in the 7th.

Woerner projects as a low-end TE at the NFL level that will struggle to stick on an active roster and will offer no fantasy value.

Jauan Jennings projects as a developmental receiver at the pro level. His lack of burst and play speed are problematic and make him an odd selection for San Francisco even in the 7th round.

The Seahawks have a history of drafting players with two seasons down the road in mind. That appears to be the formula GM John Schneider and head coach Pete Carroll followed again this year.

After adding some needed components to the defense in the first two rounds, The Seahawks added G Damien Lewis, TE Colby Parkinson, and RB DeeJay Dallas in the 3rd and 4th rounds.

At first glance, third-round pick Damien Lewis looks like he will have role in the offense in 2020 now that D.J. Fluker has been released. At 6′ 2″, 327 pounds, Lewis, though not quite as big as Fluker, has the sheer bulk that Seattle has come to value at guard.

Selecting two tight ends was a little surprising considering the team is at least three-deep, if not four-deep at that position. The selection of Parkinson in the 4th round indicates to me that Will Dissly’s future with the Seahawks is in doubt. Dissly had his season end abruptly in both 2018 and 2019 with significant injures, and they maybe be too much for him to overcome. In addition, Jacob Hollister is back and Greg Olsen was brought in via free agency.

Parkinson is a big man at 6-foot-7 and 235 pounds and has a massive catch radius. He tracks the ball well, makes terrific adjustments, and knows how to extend throwing windows. His hands are exceptional and he presents the Seahawks with a complimentary option to Greg Olsen.

Investing in DeeJay Dallas, and running back depth in general, makes sense given the questions about Rashaad Penny’s health. Dallas was a quarterback in high school, and he initially played receiver in college before switching to running back in 2017. Basically this dude is versatile. His newness to the RB position is apparent, but he shows power, physicality, contact balance, hands and a competitive demeanor. If he can become more refined, then he should be a quality backup running back who claims some touches as an RB2 in the NFL. He forecasts nicely as a special teams piece regardless.