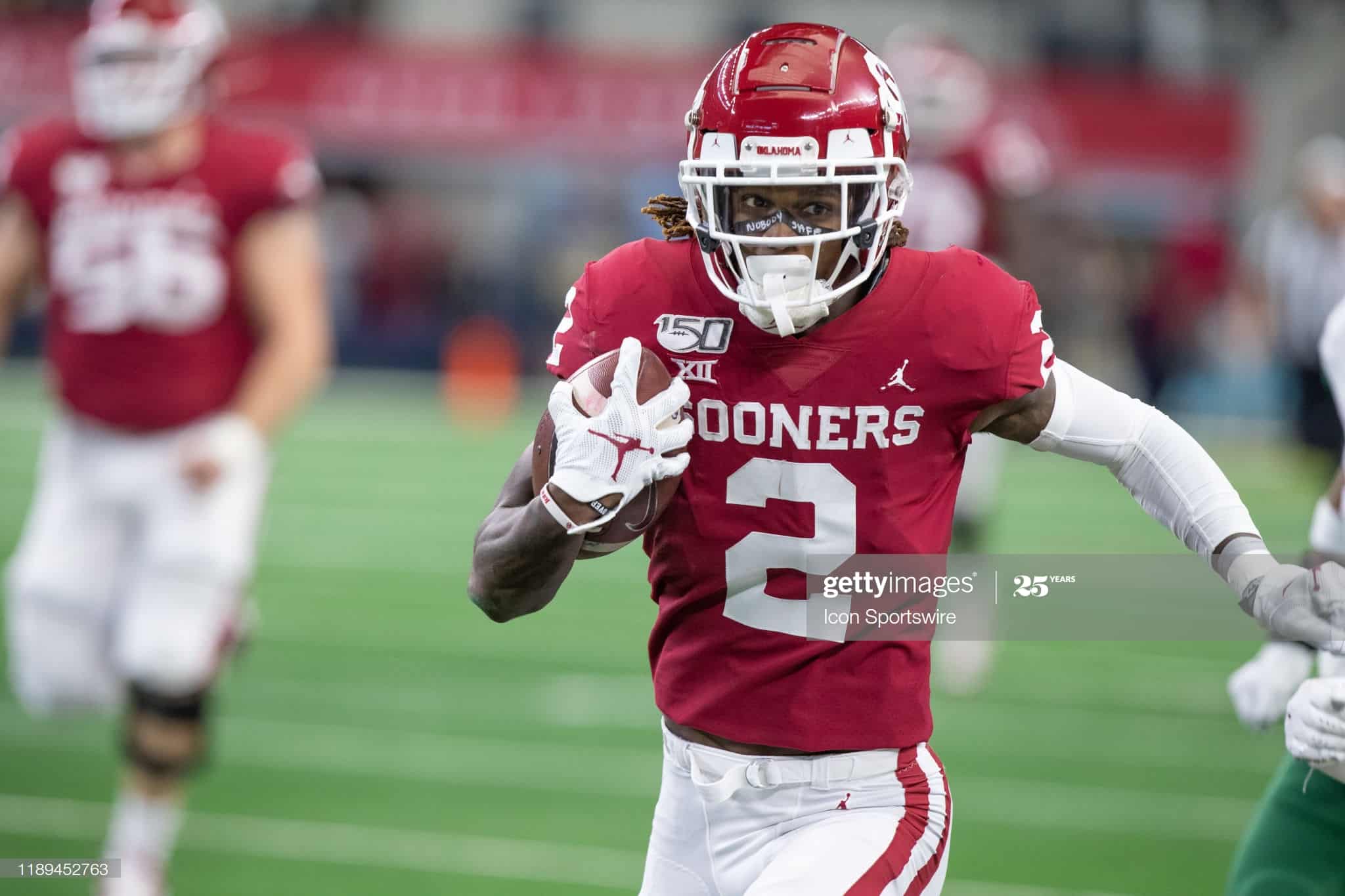 In the second installment of this 8-part series we review the Fantasy Draft Grades in the NFC East.

LOS ANGELES, CALIFORNIA – SEPTEMBER 14: CeeDee Lamb #2 of the Oklahoma Sooners reacts after scoring on a 39 yard pass play during the first half of a game against the UCLA Bruins on at the Rose Bowl on September 14, 2019 in Los Angeles, California. (Photo by Sean M. Haffey/Getty Images) Fantasy Draft Grades – NFC East

With Randall Cobb joining Houston, the Cowboys needed a new slot receiver. What they smartly realized is if they found one who could also play the “Z” position, going in motion and aligning outside, that would allow them to slide Amari Cooper into the slot, where he’s guaranteed to avoid the press-jam coverage that sometimes gives him trouble. Even better is that CeeDee Lamb himself can also play significant snaps inside, affording offensive coordinator Kellen Moore the ultimate flexibility with his first-round wide receivers. Expect to see even more of the creative pre-snap motioning and stack-release tactics from Moore this season.

Having Lamb and Cooper together almost assures that Michael Gallup, who is quietly developing into a nice “X” receiver, will often face one-on-one coverage. And in that same vein, it could mean lighter run boxes for Ezekiel Elliott. This is a quality pick with a potentially significant domino effect.

The Cowboys didn’t do much offensively in this draft but by adding Lamb and his versatility they earn this grade.

Apparently the right offer did not come along, and so the Giants took the guy they like best. Although they selected the wrong player in my opinion the player they selected is still an outstanding talent. There is plenty to like with Thomas: 36-inch arms, standout competitiveness, sound pass-blocking mechanics and overall composure. It will be interesting to see if the Giants view Thomas as a right tackle or a left tackle. Wherever Thomas plays, the hope is that late third-round pick Matt Peart can complement Thomas on the other side.

WEST LAFAYETTE, IN – SEPTEMBER 14: Jalen Reagor #1 of the TCU Horned Frogs runs the ball during the game against the Purdue Boilermakers at Ross-Ade Stadium on September 14, 2019 in West Lafayette, Indiana. (Photo by Michael Hickey/Getty Images) Fantasy Draft Grades – NFC East

In critical pass situations last season, the Eagles often went to 12 personnel—two receivers and two tight ends. Yes, they have a pair of quality tight ends in Zach Ertz and Dallas Goedert, but this personnel decision said more about what they had—or didn’t have—at wide receiver. By the end of last season their two top wideouts were a UDFA and a converted quarterback. Upgrades were clearly needed.

Jalen Reagor helps to fill the large hole in this offense. He was an explosive outside weapon at TCU who showed he can also move into the slot. While maybe not quite a pure burner through and through, he can still get vertical—a notable trait given that Carson Wentz is aggressive when it comes to pushing the ball downfield. Reagor also impressed scouts with some of his route running nuance—another notable trait given that Doug Pederson’s offense, when it’s functioning comfortably, is built on detailed route combinations.

Knowing that a lack of receiving speed was their downfall in 2019, the Eagles compensated very thoroughly by also drafting burner John Hightower in Round 5. With the two rookies aboard and veteran DeSean Jackson (hopefully) back healthy this year, Philly’s offense has quite simply gone from slow to fast.

Another interesting addition to the offense is second-round quarterback Jalen Hurts who was potentially brought in to be a dynamic gadget weapon. Carson Wentz has obviously been injury prone, but it’s highly unlikely that Philadelphia would spend a second-round pick on an insurance policy here, and it is inconceivable that they’d even contemplate replacing a 27-year-old QB who has shown MVP traits, and a massive contract. Even if Hurts’s gadgetry role is clearly defined, don’t make any Taysom Hill comparisons; Hurts is a dual-threat QB but not a blocker or receiver on top of that.

With Washington’s second-round pick being sacrificed in last year’s trade up to get Montez Sweat, head coach Ron Rivera’s second selection was not until early in the third-round. He took Memphis tailback Antonio Gibson. When healthy, you could argue that Chris Thompson has been one of Washington’s three most valuable offensive players. The problem is Thompson has not been healthy nearly often enough, missing at least five games in each of the last three seasons. So, Washington drafted a younger version of Thompson; a dynamic receiving back can be a good friend for a young pocket passer like Dwayne Haskins.

So can a sound offensive line, which Washington is trying to piece together after their trade of Trent Williams to the 49ers officially leaves them with one of the least steady left side O-line situations in the league. It’s not inconceivable that mid-round selections OT Saahdiq Charles and even C Keith Ismael could see playing time as rookies, especially considering they’re both capable of lining up at guard.

Fourth-round selection Antonio Gandy-Golden, helps to fill the void at the WR position. Next to 2019 rookie Terry McLaurin, there isn’t much to get excited about in D.C. In two seasons at Liberty, Gandy-Golden racked 2,433 receiving yards and 20 touchdowns including a 1,396 yard, 10 touchdown 2019 season. This is a perfect pick for a Redskins team in dire need of a tall end zone threat.