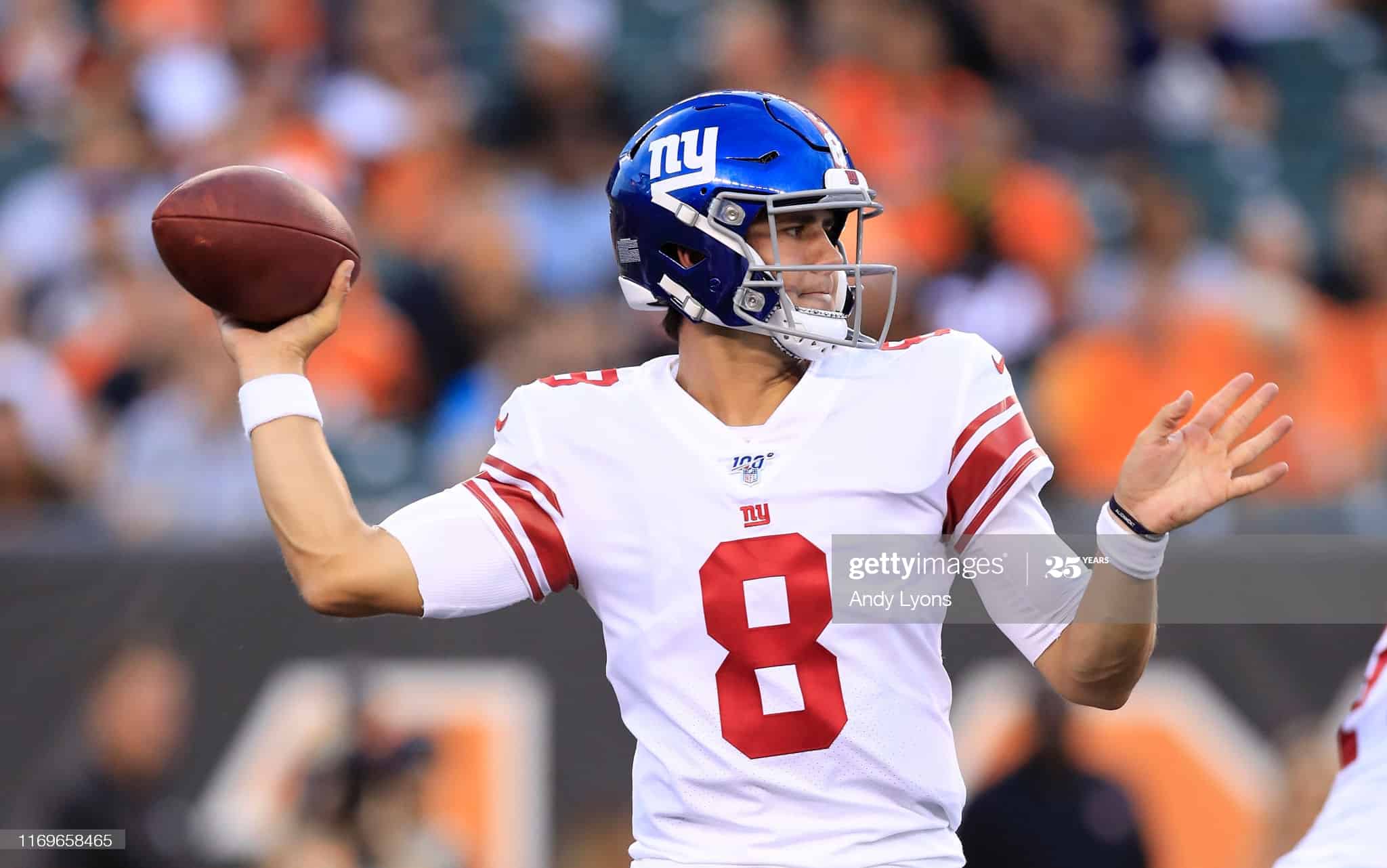 It happens every year. You’re sitting in a redraft somewhere in the middle rounds, and more and more QBs start to come off the board. But you stay strong and steadfast. You want to load up on RBs and WRs before taking a QB in the late rounds, as you should.

The only thing that can be difficult when it comes to late-round QBs is finding out who to target and who to fade. I am here to tell you why you should fade Daniel Jones in redraft.

I understand why people like Daniel Jones the player, and especially the fantasy player. He started 12 games last season, and in four of those he had over 28 fantasy points. One of those was during Week 16, where he was the QB1 and helped some people win their championship.

So, we know he can absolutely crush it in your lineup. However, the issue with Daniel Jones was his enormous inconsistency. In the 8 weeks where he did not top 28 fantasy points, he had under 15 points in all of them. That is not something you want to see from your starting QB in fantasy. In his rookie season, he was a good streaming option with an extremely high ceiling in favorable matchups.

As a result of his blow-up games in 2019, Jones has become a favorite of many fantasy owners as someone who could be a fantasy star for you. He is viewed as a QB you can take in round 10 or later and see a strong return on that investment.

To me, drafting him as your QB1 in redrafts is giving him too much credit.

Jones struggled with ball security and turnovers in his rookie season, and even though reports out of Giants’ camp has him working on that issue, it is unlikely that those turnovers will just disappear. He had 12 INTs and 11(!) lost fumbles on 18 total fumbles. Daniel Jones had 1.93 turnovers/game in his rookie season. That is the worst since 2013. The only other rookie QB to have over 1.5 TO/game is Geno Smith at 1.56.

Of course, fumbles can be corrected. Even if he improves a lot in that department, like a Jared Goff who improved his TO/game by 0.62 from his rookie to sophomore year, Daniel Jones is going to have 1.3 TOs/game, which is still 21 turnovers.

The turnovers also meant that outside of the 4 super-weeks, Jones was never better than QB15, and he busted (13.9 pts or lower) in 53.8% of his games according to Mike Tagliere of FantasyPros.com.

So despite the fact that Jones is now in his second year, and he is probably going to have all his weapons to start the season, I still think he is going to turn the ball over more than you want your starting fantasy QB to do.

The lack of ball security and inconsistency, however, is not the primary reason why I am shying away from Daniel Jones in drafts.

The real kicker here is the schedule that Jones will be facing to start the season. He opens against the Pittsburgh Steelers, who might just have the best defense in the league. Then he plays the Chicago Bears at Soldier Field in Week 2 and returns home to the Big Apple in Week 3, only to face the San Francisco 49ers. Last season, the Steelers were the 4th best team against opposing QBs in fantasy, the Bears were 6th best, and the 49ers ranked 10th best. In Week 4 he plays the 11th best team against QBs in the Los Angeles Rams.

That is the toughest start to the season for any QB this year.

But it doesn’t stop there. Before his bye in Week 11, he also has games against the Dallas Cowboys, the Philadelphia Eagles twice, Washington twice, and the Tampa Bay Buccaneers. Of these teams, the Cowboys and Eagles both ranked in the top half against opposing QBs in fantasy. Down the stretch of last season (Week 12 and on), the Buccaneers were a top 8 defense against QBs.

In games that Daniel Jones started versus defenses in the top half against opposing QBs (NE, GB, CHI, MIN, DAL, NYJ, PHI), he averaged just 13.6 fantasy points, and as you can see from the schedule, there are really no gimmies for Daniel Jones until he gets the Bengals in Week 12.

The combination of his high bust chance and playing against some strong defenses in the first half of the season is the primary reason you should fade Daniel Jones in redrafts this season.

Pick him up later in the season

Personally, I really dislike drafting two QBs in a 1QB redraft league, and because of this I very rarely draft more than one. This season is a bit different, however, and I can’t fault people as much with taking a second QB due to concerns about COVID and QBs being forced to be inactive on Sunday morning.

For Jones though, his schedule and propensity for turning the ball over makes me see no reason to draft him in 1QB leagues only to have him sit on your bench for at least 3 to 4 weeks.

Do not waste your draft pick and bench depth on him. Let someone else draft Jones and deal with the headache he is going to be at the start of the season, because the likelihood that he ends up being dropped sometime between Week 2 and 4 is fairly high. Once Daniel Jones has been dropped, you can swoop in and pick him up if you are still in for the rollercoaster ride that his Weeks 5 to 10 are going to be.

Instead of drafting Jones, draft someone like Jimmy Garoppolo, who has very favorable matchups against Arizona, New York Jets, and the New York Giants in his first three games.

Of course, if you like Daniel Jones’ prospects this year and you are absolutely hellbent on drafting him, make sure you draft another QB to cover for at least the start of the season…

…just do not go into Week 1 with Danny Dimes as your starter.