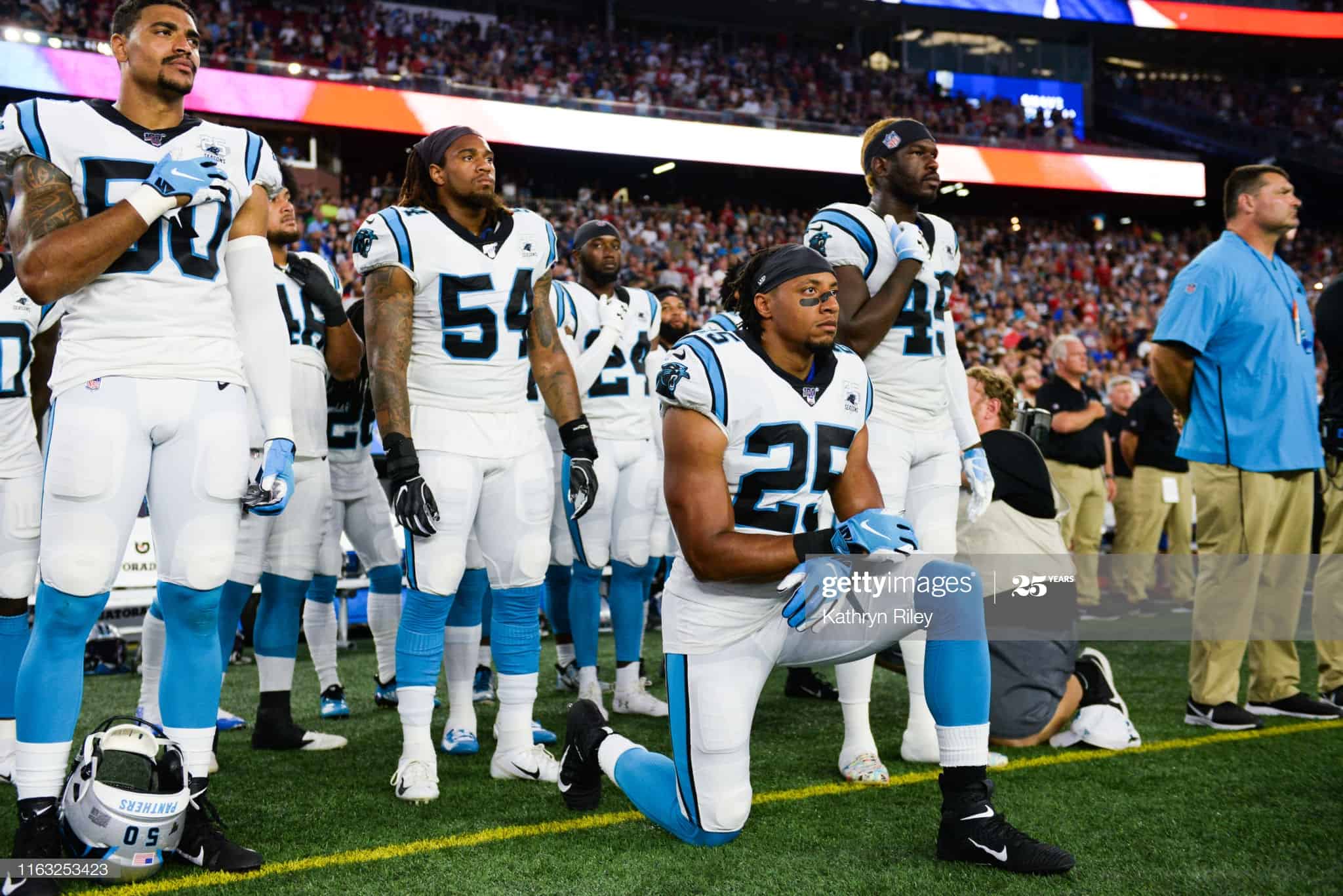 After a standout career at LSU, Eric Reid was taken with the 18th pick in the 2013 NFL draft by the San Francisco 49ers. He was the second safety taken in the draft behind Kenny Vaccaro. He started all 16 games his rookie year, earning a Pro Bowl selection as a replacement for Kam Chancellor, after Reid had 77 combined tackles (62 solo), two fumble recoveries, 11 pass deflections, and four interceptions.

Although the exact reasons are not public, it took until September 27, 2018 for Reid to sign with a team, when he signed with the Carolina Panthers. Reid was and is an outspoken supporter for the Black Lives Matter movement, and along with then teammate Colin Kaepernick, Reid used kneeling during the National Anthem before games a sign of support for the cause. At that time in the minds of many team owners, this brought negative publicity to the team and sadly this is believed to be the main reason he was not signed sooner.

Despite that, in 13 games he produced 71 tackles (50 solos and 3 for a loss), one sack, one interception and five pass deflections. In 2019 he took it up a notch with 130 combined tackles (97 solo with seven for a loss), four sacks, six pass deflections, one forced and two recovered fumbles

Reid was released in March of this year and remains a free agent, so his current outlook remains unclear for the season.

Given how well Reid played last season, and the recent openness society has shown in supporting athletes in their support for the Black Lives Matter movement, I believe it is unlikely he remains a free agent into the 2020 season. The situation he goes into, and contract he signs, will go a long way to establishing his long term value. If he goes to a favorable situation, he could repeat his DB1 performance from last year. If he goes to a more established secondary, his floor is probably that of a high DB3.

Valuing Eric Reid at this time is difficult, as we do not know what situation he will be going into when he signs. Given that he is still a free agent, this is a good time to buy him. He was the #2 DB in 2019 when using the RotoHeat scoring we have discussed on prior livestreams, and he was only three points behind the #1 DB.

With his status in flux, I would be seeing if he was on waivers or if you could get him cheap from the current owner. We know his ceiling, and it is not often you have chances to get this high of a ceiling this cheap. If you need DB help, in an offense for defense sort of trade, a WR4 or RB4 is a good starting point for talks, but the window to buy low will close once he signs.

Let us know what you think about Eric Reid; he is currently not ranked within the top 180 players we have within our free IDP rankings, due to his current free agency status. You can catch our IDP-Specific Live Stream Monday Nights @9:30 Eastern over on YouTube!