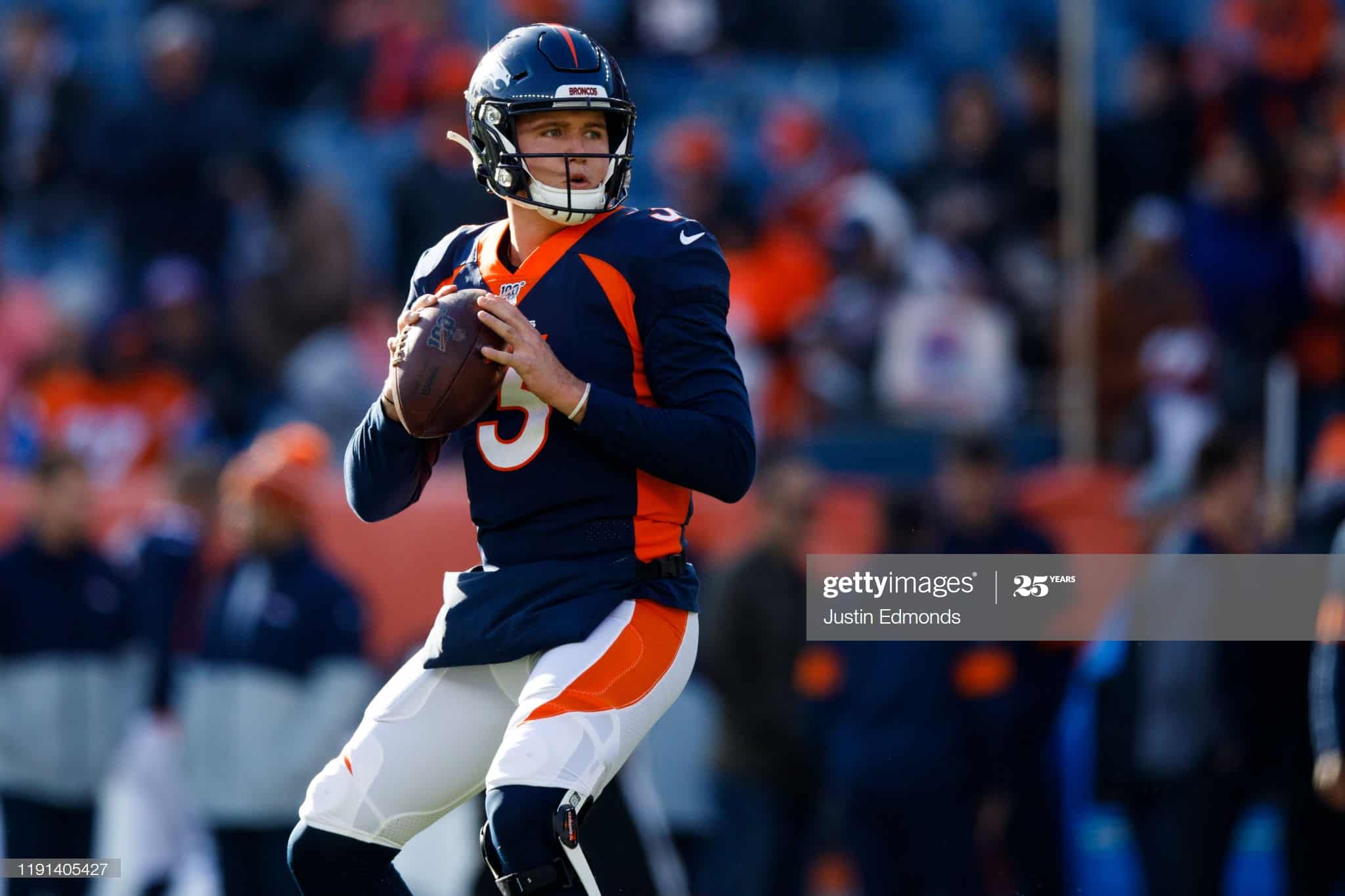 Missouri QB, Drew Lock was selected by the Denver Broncos in the second round (42nd overall) of the 2019 NFL Draft.

In his rookie season, Lock entered training camp with an unclear role behind starter Joe Flacco. He suffered a thumb injury and was placed on injured reserve on September 1, 2019. He was designated for return from injured reserve on November 12, 2019.

Drew Lock made his first career start in week 13 against the Los Angeles Chargers and went 18 for 28 for 134 yards with 2 touchdowns and an interception. He started the remainder of the season for the Broncos and finished with 1,020 yards passing, 7 touchdowns and 3 interceptions. Lock ended the season as QB37 in 5 starts. He averaged a mediocre 14.20 points per game, which over the course of a full 16 games equates to 227.20 points.

In those five starts, Lock completed more than 64 percent of his passes and threw seven touchdown passes to three interceptions. He finished the year riding a streak of 79 consecutive throws without a pick, and he was sacked just once per start on average. He did that despite the fact that the Broncos traded veteran receiver Emmanuel Sanders before Lock took over as the starter, forcing him to rely heavily on unaccomplished targets DaeSean Hamilton, Tim Patrick and Noah Fant.

As we head into 2020, Drew Lock is the unquestionable starter, and the Denver Broncos suddenly have an abundance of weapons on offense. This infusion of talent could lead to the Broncos being very creative offensively. Denver can use a wide variety of weapon packages to attack defenses in all sorts of different ways. WR Courtland Sutton returns for his third season fresh off a 1,112 yard season, and he is joined by rookies Jerry Jeudy and K.J Hamler. Second year TE Noah Fant is joined by rookie Albert Okwuegbunam, and free agent RB Melvin Gordon and Phillip Lindsay round out the offense in Denver.

Perhaps the best offseaon acquisition for the Broncos was the hiring of former New York Giants Head Coach Pat Shurmur as the teams new Offensive Coordinator. Prior to his two years in New York, Shurmur spent two seasons as the OC in Minnesota. In those seasons, QBs Sam Bradford and Case Keenum had the best seasons of their careers.

Lock is in a great spot to break out in what is basically an extension of his rookie season. He has the accuracy and arm strength to excel in Shurmur’s offense. If he can improve his foot work and cut down on his tendency to force some throws, Lock could finish as a top 15 quarterback in 2020.

Entering 2021 is where I start to get excited about being a Drew Lock owner. After a year learning the position in the Shurmur offense adjacent to the 2020 rookie class learning and developing, the 2021 version of the Denver Broncos appears loaded and poised to explode. I see Drew Lock as a fixture in the top 10 at this position starting in 2021 and for years to come.

I currently have Lock ranked at QB17. The time to buy Drew Lock is now, as I do not envision his price being this low in the years to come. If I owned Drew Lock, I’d be holding the asset, especially in Super-Flex formats. The Rotoheat Super-Flex consensus rankings have Lock at #92 overall and at QB19.

If you are looking to sell Drew Lock in a Super-Flex league, you should be looking at a price of a mid 1st round rookie pick in return, and if you are looking to buy you should be able to find an even better price. I would send quarterbacks like Daniel Jones and Matt Ryan straight up for Lock. You may be sacrificing some short term value, but in years to come you will reap the rewards. Drew Lock is the ideal QB for those building for the future.

Thank you for reading the Drew Lock 2020 Dynasty Outlook