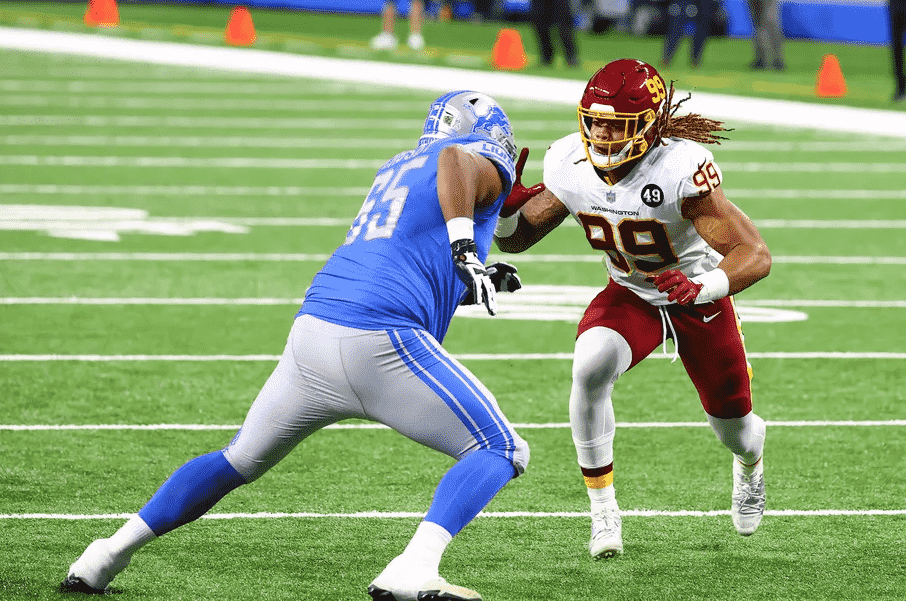 A standout defensive end for Ohio State from 2017 – 2019, Chase was the #2 overall pick in the 2020 NFL Draft by the (now) Washington Commanders. He had a fantastic rookie year, ending the season as the NFC Defensive Player of the Month in December 2020, a Pro Bowl selection, and the 2020 Defensive Rookie of the Year. Here are his first-year stats:

Pretty good, eh? He ended 2020 as our DE 5 overall in both total points, and points per game. Unfortunately, 2021 was not be a repeat or better like most were hoping for. Chase battled nagging injuries, and self-applied pressure to be better, for most of the year before tearing his right ACL on November 14, 2021. He ended 2021 with nine games played and this disappointing stat line:

With the speed that some players can come back from ACL tears, many fantasy managers were hoping for an offseason of recovery and the chance to see rookie year Chase back in 2022. It does not look like that is likely to happen though.

Chase was placed on the PUP last week; this means he will miss at least the first four games this year. This should lower his redraft value this year a decent amount from where it has been. He was going off as the DE 3 /DL 4 in August Sleeper drafts and was DE 12 / DL 17 over at FantasyPros rankings. Both of those were (before the news) and still are too high for me.

Chase has all the talent in the world to be a top-tier defensive end/defensive lineman/edge rusher, but outside of a promising rookie year, we have not seen it. He has moved down my dynasty rankings slightly, but he should be taking a precipitous fall in redraft rankings now.

Head coach Ron Rivera believes last year’s poor season has helped humble Chase a bit. The team taking it slow with him is good for his long-term outlook but again does not help us this year. If you have a place to stash Chase for this year, I would do it on the chance he comes back later this year fully healthy. But in shallow redraft leagues and those without IR slots, I just cannot recommend drafting him and keeping him on your bench. Even when he does come back, he will be recovering from an injury that most players do not just come back from ready to ball out.

Ending the year as a DL2 in points per game and DL3 overall is about as lofty as I want to project for him right how with all the unknowns. He will still go higher than that in redraft leagues so for this year he is a stay away for me at cost.