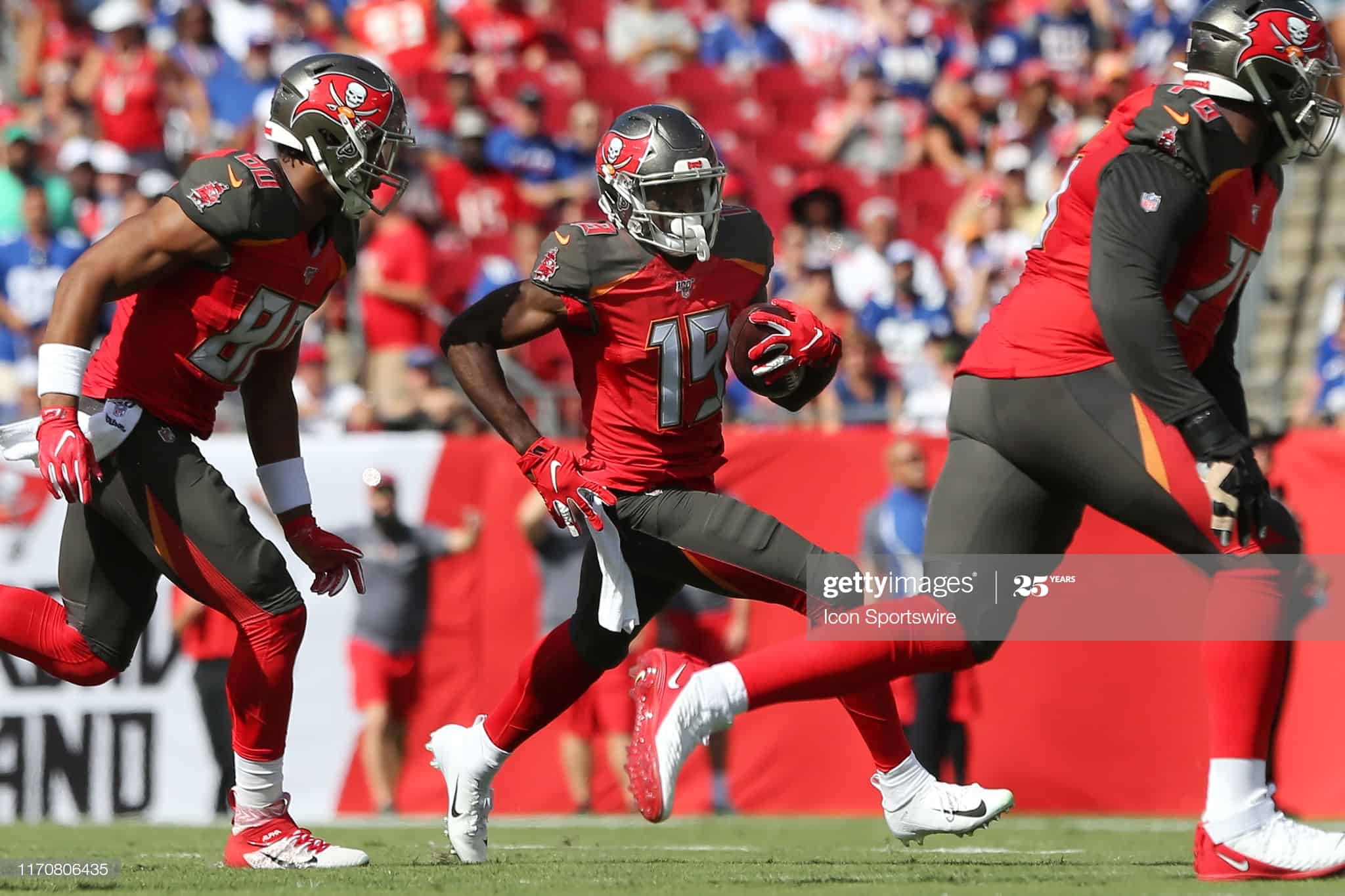 Perriman failed to participate in the 2015 NFL Combine due to a hamstring injury, but he impressed at UCF’s pro day where he ran two sub-4.3 40-yard dashes. This performance led to his selection on day one by the Ravens.

Breshad Perriman appeared in parts of 25 games with Baltimore (starting 4) and totaled 43 receptions on 101 targets for 576 yards and 3 touchdowns. In September of 2018, Perriman was released by Baltimore, signed by the Washington Redskins, and released five days later. One month later he was signed by the Cleveland Browns. Perriman caught 16 passes for 340 yards and two touchdowns in the 10 games he participated in for the Browns in 2018.

In March of 2019, Perriman signed a one year $4 million dollar deal with the Tampa Bay Buccaneers. He appeared in 14 games with the Bucs and in his first 9 contests averaged 4 targets, 1 reception and 15 yards a game. Perriman was arguably the NFL’s most productive wide receiver during the last month of last season for Tampa Bay, however. He caught 25 passes for 506 yards and five touchdowns in the Buccaneers’ final five games and became Jameis Winston’s top target after season ending injuries to Mike Evans and Chris Godwin.

As we enter the 2020 season, Perriman finds himself in his 5th organization in 5 seasons. Perriman signed a one year $8 million contract with the New York Jets. The Jets needed a speed receiver after losing Robby Anderson to the Carolina Panthers.

Perriman is a downgrade when comparing him to Anderson, but he gives the Jets a veteran presence and a perimeter receiver with the speed needed to stretch the field and take the lid off the defense. For now, Perriman is the Jets #1 wide receiver. The biggest question to be answered here is are the Jets getting the guy who went off late in 2019, or are they getting the guy who underachieved for the first 3 1/2 years of his career?

The X-factor here is Adam Gase.  Gase continues to run an offense that consistently ranks near the bottom of the league in plays ran.  He’s been doing this all the way back to his time in Miami. In Gase’s three seasons as head coach in Miami, his offense has ranked 32nd in offensive plays run twice, and 22nd in the other season; last season in New York, the Jets ranked 28th. Comparatively, in 2019 Tampa Bay ran the 5th most plays a game, and in the last 5 weeks averaged 64 plays, while the Jets were averaging 57.

If the Jets can improve the offensive line, if Sam Darnold can take a step forward, and if Breshad Perriman is the receiver we saw towards the tail end in Tampa, then this 1-year contract will be a steal for the New York Jets and favorable for the Breshad Perriman 2020 Dynasty Outlook. I get it that is a lot of if’s.

The Jets will almost certainly add a WR via the draft and may select a receiver as early as round 1. Adding another quality receiver to join Perriman and Jamison Crowder should help Perriman. He is not the top 12 WR we witnessed down the stretch last season, but as the likely target leader for New York in 2020, he should be able to deliver a season in the WR 24-30 range.

Projecting the dynasty outlook for Breshad Perriman after the 2020 season is challenging and quite dependent on the season he has in 2020. He will turn 27 during the season, and due to injuries early in his career and limited snaps the majority of the rest of it, Perriman should have quite a bit left in the tank. I do not expect Adam Gase to last as head coach past 2020 in New York, and I project Perriman to deliver a season with around 85 receptions and 900 yards, with 4-5 touchdowns. I would expect that after a season like that he would receive a contract extension. The Jets post-2020 with Perriman, Darnold, and perhaps Cee Dee Lamb or Jerry Judy, and a new offensive direction sans Gase is very promising for Perriman and the rest of the Jets offense.

Placing a value on Breshad Perriman is not an easy task. This was a wide receiver that until that later portion of the 2019 season you could have had for free off your waiver wire. He has had a preseason ADP as high as 79 in 2015 and as low as 250 in 2019 . I currently have Perriman ranked 147th overall, and ranked as my 62nd WR. His current startup ADP is 133rd.

His upside vastly exceeds the round 11 ADP, and my ranking of 62nd WR. The concern I have is his unknown floor.