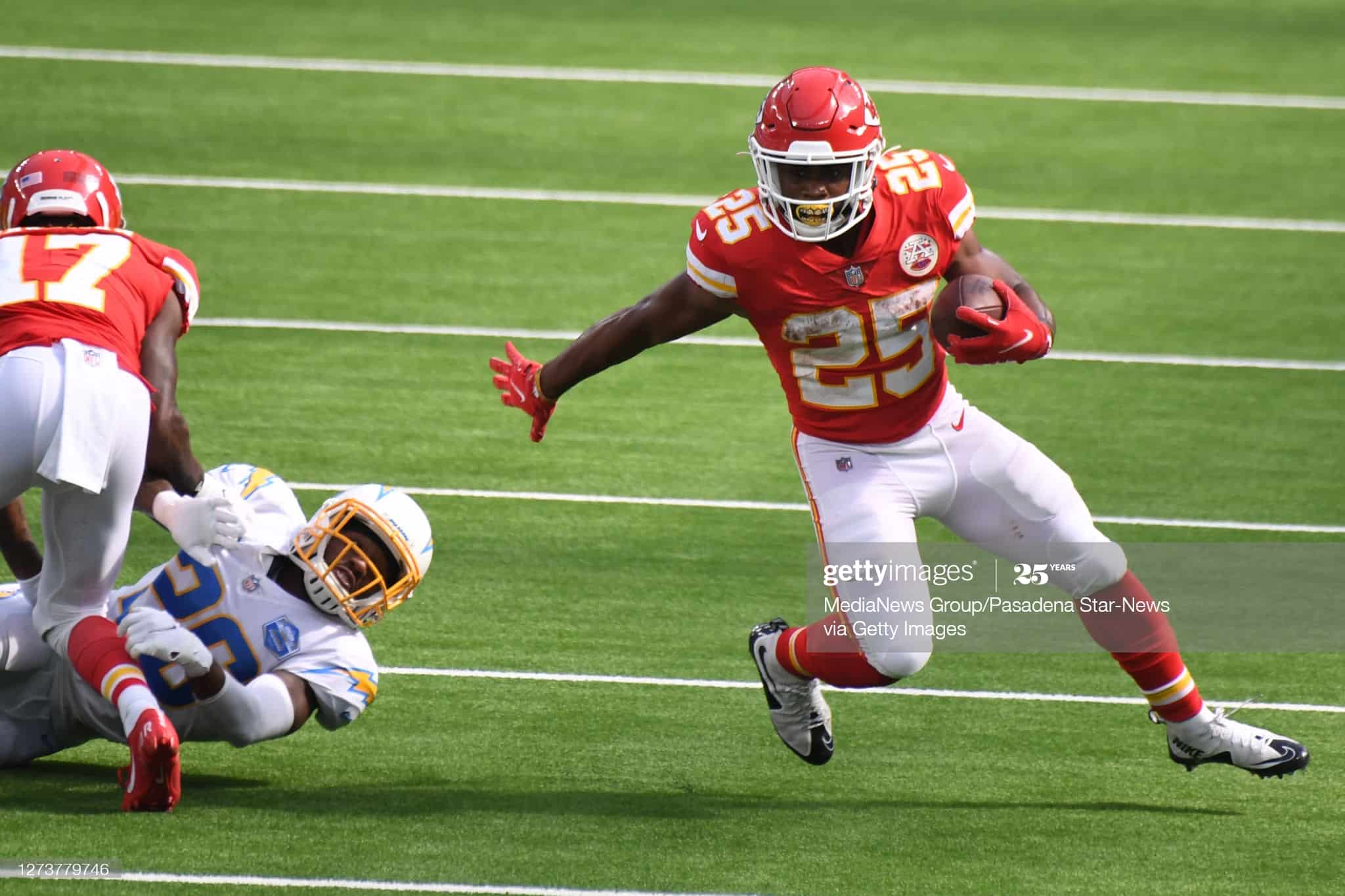 First, I want to apologize for my lack of DFS articles the past two weeks. Things have been pretty crazy on my end, but that has also given me time to think about the content. While cash plays are great, I think there is a better way to give you value, so from now on, I am going to approach this differently, starting with the “Best DFS Plays Week 5” article.

Like you, I read and watch as much DFS content as I can throughout the week. I want to know where as many people stand on players and stacks as I can. One thing I have noticed is that there is a lack of advice on secondary stacks. When it comes to GPP’s, depending on the size of the contest, you want more & more correlation. Even for my single & 3-max entries, I want to correlate as much as possible.

If you are wondering what correlation is, it is when certain plays have a higher chance of succeeding in correlation to another play in your lineup. For example, everyone knows that QB’s correlate with their WR’s. If you play a QB/WR stack in your lineup, an opposing player correlates with that stack. But that is where most people end their correlation. They either stack QB+WR or QB+WR+Opposing Player and then just fill in the rest of their lineup.

That isn’t where you should quit correlating though. The more correlation you have actually gives you the best opportunity to have a solid ceiling lineup. This isn’t recommended for cash specific lineups as correlation actually comes with more risk as well. If you are wrong about the game script, your lineup will suffer. If you are right, you have a better chance of finishing towards the top of the leader boards.

So, in my Best DFS Plays Week 5 article, I will be going further than just highlighting the best individual players to play, but who you can use to correlate with them and why.

When it comes to the main stacks, one of the main things we want to look at are team & game totals. For example, we rarely are going to want to stack the Washington Football Team who typically has a team total of around 18 points/game. Yes, there will be weeks when they exceed that, but we want as much ceiling as possible.

Thus far, Dallas Cowboys stacks have been money in the bank. It is pretty obvious that they will be the most popular stack in week 5 and I won’t argue against them, even though I will be looking for opportunities (keep reading) to leverage the field on this expensive stack.

When it comes to the Kansas City Chiefs I had hoped that the public would have forgotten them a little with them only being on the main slate one time so far, but our friends over at DFS Army have Mahomes as one of two (with Prescott) QBs over 15% owned. Again, you can get creative with Mahomes stacks and I wouldn’t argue against them. I do think there are some great ways to leverage these stacks as well.

Keep in mind that while these teams have huge team totals, they are also heavy, heavy favorites with Dallas at -9.5 and Kansas City at -11.5. Too much of a good thing can be a bad thing, right?

In week 5 we only have 4 games that are supposed to be competitive. By competitive, I mean that the favorite is less than a 7 point favorite at the time of this writing. Out of those four games, we only have two with game totals over 50. This is the most competitive game on the slate with back-n-forth potential. Who doesn’t love two bad defenses for fantasy purposes right?

My favorite side is the Matt Ryan side of this stack because I think we can not only get 3 TD + 300 Yard bonus upside, but because there is also the potential for some serious value on that end as well. This is also the lower owned side of the stack, with multiple Panthers projected for 20+% ownership.

As you can see, I included Todd Gurley in bring back stacks, but not Atlanta Falcons stacks. For me, Todd Gurley is the perfect leverage player opposite the high owned Panthers stacks. While he is still likely to come in around 15%, if you just run back a Teddy Bridgewater + DJ Moore (23%) + Mike Davis (27%) and bring it back with only Gurley by himself, you will be in a position that if Atlanta gets a big lead and Gurley scores another two TDs, you can leverage the field that brings that stack back with Calvin Ridley (15%) who will likely not have a ceiling game if Gurley scores multiple TDs.

If we aren’t worried about DAL & KC being big favorites, why would we worry about the Steelers. I don’t want to heavy stack this game as the Eagles have few ceiling options in this matchup, but I do love some high upside Steeler stacks with a light bring back here. Ben Roethlisberger is projected to be sub 2% owned, JuJu Smith-Schuster sub 4%, Diontae Johnson sub 6%, Eric Ebron sub 5% and James Conner sub 7%.

This offense just has way too much upside for it to not be on the best DFS plays week 5 list with the lack of ownership at their price, IMO.

Pittsburgh Stacks: Ben Roethlisberger + 1 or 2 of JuJu Smith-Schuster, Diontae Johnson, Eric Ebron, or James Conner. Bring back with no more than 1 of Zach Ertz, Greg Ward, or Miles Sanders. I love bringing it back in all my stacks, but this may be a stack where I could see a Big Ben + 1 Option with no bring back, leaving a lot of room for great secondary stacks.

Listen, I am big on the fact that your secondary stacks can win you money as often, or more often, than your main stacks. This is where we can gain some serious leverage on the field if we hit correctly. Most of my secondary stacks are going to be RB + opposing WR/TE as my main stacks almost always have two WRs in them.

This is direct leverage off of all the Dak stacks. I think it is just as likely, if not more, that Zeke runs for multiple TD’s and suppresses the QB/WR fantasy production on Dallas’ side of things. Zeke is projected for around 29% ownership, but I think pairing him with Darius Slayton or Evan Engram without any other Dallas options will greatly leverage the field that will likely be using those guys as bring backs to the WR weapons.

This is very similar to my thinking on the Elliott secondary stack. Waller will probably be the bring back in most Mahomes + WR stacks, so even though both players (29% for CEH and 18% for Waller) are projected for high ownership, I think we are getting much different with out usage of them.

When it comes to Clyde Edwards-Helaire, he is on the positive side of a heavy favorite and the matchup is as juicy as they come. The Raiders are giving up a league high 37.65 PPR points per week to RBs. They have given up 2 running back TDs per week. 7 rushing and 1 receiving. This is the best matchup that CEH has had this season and we get to leverage the Mahomes/Hill/Kelce lineups.

I know people are going to say they are done with Kenyan Drake and that is precisely the reason I want to be on him this week at a 5700 price tag. This is a low owned/high upside combo that we could benefit from.

With an offense running horizontal like this, there is just not the same amount of room for the running game to work. Arizona needs to take notes from the way Cincinnati changed their usage in week 4. They also had a congested offense in weeks 1-3 with terrible usage of Joe Mixon. In last weeks matchup, they stretched the field, gave Mixon more room to work and incorporated him into the passing game. That paid off big not only for fantasy owners, but their team.

I am not predicting a 40+ point outburst by Drake, but if the struggling Cardinals team makes adjustments, Drake is in a matchup vs. a Jets team that gives up over 4.5 yards per carry, 5 yards per pass attempt to RBs and they have given up more red zone targets to RBs than anybody in the league.

To bring it back, Crowder is the clear leader for targets on the Jets side and easily has the most TD upside out of the receiving options.

Both team totals are palatable with Jacksonville at 23.2 and Houston’s at a great 29.8, but I am not really looking at either QB this week, so how do we get a piece of this game while helping make our lineups different? For me, it is to come back to a 4100 Brandin Cooks coming off of a zero-burger. We know that is always a possibility with Cooks, but we also know that he has ceiling potential as well.

While a lot of people are talking about David Johnson being in a great spot, I want to take the 1/2 owned Cooks and bring it back with DJ Chark who is another ceiling WR that is expected to be chasing the opponent.

Let’s not forget that the entire Houston organization is likely revitalized after the removal of Bill O’Brien from his position as GM, coach, and play-caller. This Texans offense is obviously going to change and likely for the better. Cooks is was meant to be a big part of this offense and it is likely that begins coming to fruition starting in week 5.

This is easily a Best DFS Plays Week 5 for me. We don’t need a reason to play George Kittle. DeVante Parker on the other side will need a little more convincing, but the Dolphins are a 9pt dog that will have to throw the entire game. Parker (with a little Gesicki) is the entire passing game for the Dolphins.

He struggled at the beginning of the season with a hamstring issue but seems to be back to full health after a 12 target, 10 catch, 110-yard performance in week 4. It is not a stretch to think we see similar production and if he finds the end zone we have a sub 6000 WR with 30+ point potential, under 3% ownership. That is a solid combo if you ask me.

Join me on our DISCORD server as we talk DFS on the daily and stop by the YouTube Channel on Sunday mornings for the Week 5 Tailgate stream and drop your questions in the chat. Also, keep an eye out for more DFS content here on RotoHeat.com.