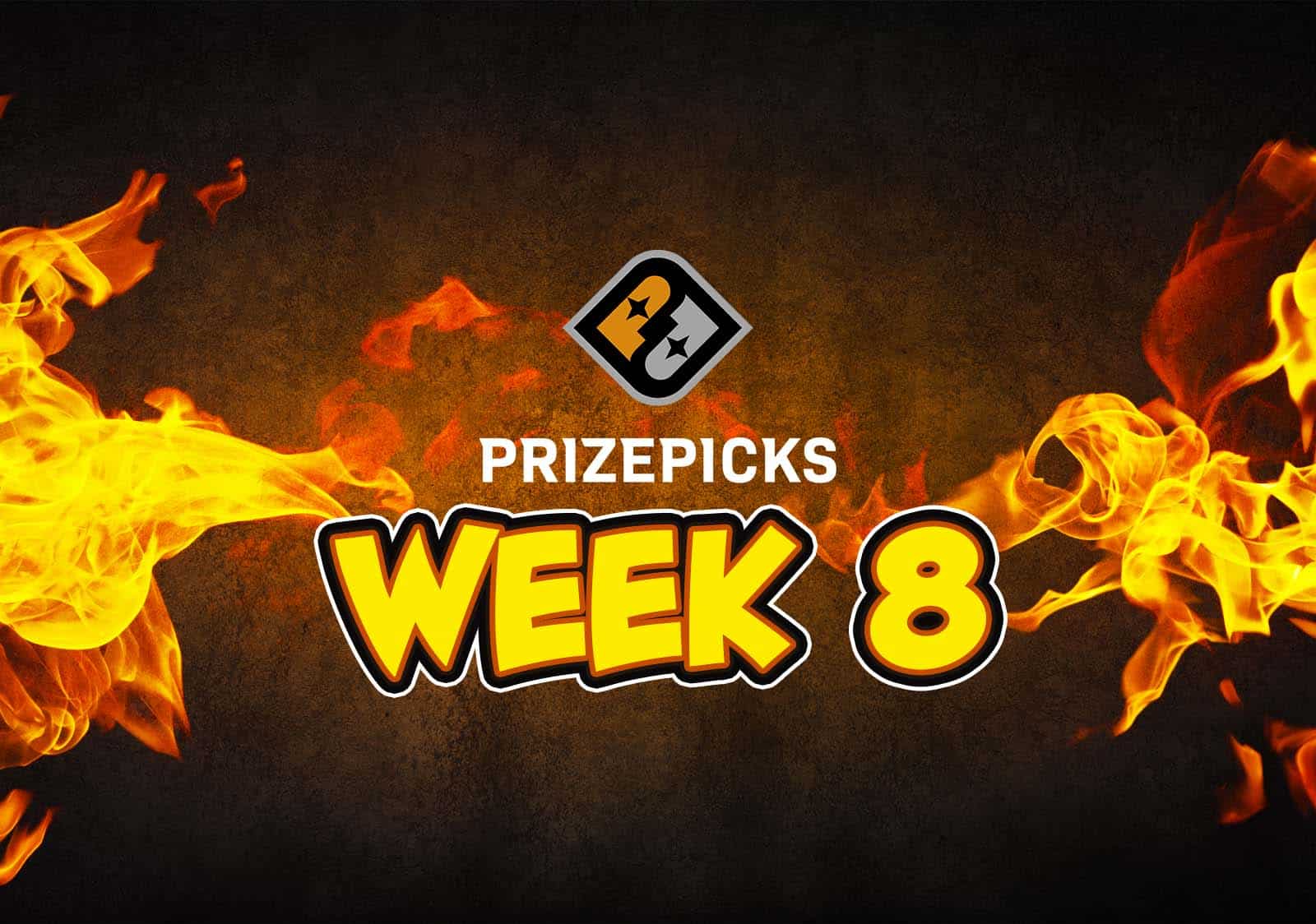 I have put together my favorite PrizePicks Week 8 props and would love to share them with you! First, I know a lot of people are probably new to PrizePicks, so make sure you head over and read my how-to article. For the short version, on PrizePicks you are just picking “Over” or “Under” on single stat or fantasy point projections–no huge fields, just you and your picks!

Right out the jump, we can take a look at the results from my Week 7 PrizePicks article.

That ends up being a 5-2 week with the unfortunate injury to Miles Sanders who looked to be on his way to solid usage for the first time in 2021.

In the 3 weeks that Khalil Herbert has been the top running back for Chicago, he has eclipsed this number. He has not seen less than 18 carries and 4.17 yards per attempt in those three games. We could try to poke holes in his production, but he just topped 100 yards against Tampa Bay, who had not given up 100 yards rushing to a single back since December 13, 2020 when Dalvin Cook topped that number. That is 13 games in a row with the playoffs included that the Bucs had not had a 100-yard rusher against them. Impressive kid.

That is 272 rushing yards in the past three weeks which is third in the NFL behind only Derrick Henry and Jonathan Taylor.

For me, this is a fairly easy one. While Gainwell will likely split carries with Boston Scott as we saw last week where Gainwell had 5 and Scott 7, the Lions are a team to run on. They currently sit 4th in the NFL with 203 attempts against them. Only the Eagles, Seahawks and Texans get ran on more often. I expect Gainwell to get 10+ rushing attempts in this game and that should allow him to easily hit the over on his 31.5 rushing prop.

I get it. It is never fun to put money on Daniel Jones, but hear me out. Jones eclipsed this number in each of the first 4 weeks of the season. In week 5 he was literally knocked out and he was only 5 yards short vs. the Rams in week 6. Now enter the Kansas City Chiefs. Through 7 weeks, they have failed to keep any QB against them to throw for less than 251 yards. In games that Kansas City has won, quarterbacks have thrown for 324, 271, and 390 yards.

So, if you think the Chiefs are going to win this game, Daniel Jones is going to be throwing a lot and is a good bet to hit this over.

I will be straight up. This bet is pure speculation. If the Cowboys are going to play Dak Prescott this week, I believe they will protect him and rely on the run. I have no data to pack this up. The Vikings can be thrown on, but with Dak less than 100% I have to assume that they just rely on Elliott and the running game. More on that now.

If we are going under on Dak, then pairing that with the over on Zeke is a good play in my opinion. In the 3 games that Dak has gone under 300, Zeke has rushed for 71, 95, and 143 yards. The beauty of this, is that while the Vikings get thrown on more, their defense gives up the 3rd most yards per attempt at 4.8. The Cowboys can definitely have their way with them on the ground.

Bonus: In that Zeke 71-yard game, Pollard added 109 yards on the ground. In the other two, he had 60 and 67 rushing yards. His over/under is set at 39.5, which is a number he has hit in all but one game. So really, playing the Dak Under + Zeke and Pollard overs is a great 3 piece.

From weeks 2-5, Patterson went for 58, 82, 82, 60 receiving yards. The outliers are weeks 1 and 7 where he went for 13 and 1. Basically, he has either smashed it or came in well under. In this divisional game, I expect him to be heavily involved.

Dating back to last year, Gage has hit this number in 7 of his past 10 games. The concentration is now on Ridley and Pitts, which benefits both of these Falcons.

The Seattle Seahawks have given up the 4th most rushing yards with 939 on the season. With the threat of an actual passing game, James Robinson has actually improved on his 4.5 yards per attempt in 2020 by a full yard. After the first 3 weeks where Meyer was flirting with Carlos Hyde, in the last three games Robinson has seen at least 17 carries. Over the past four weeks, he has hit this number three times, with performances of 88, 78, 149, 73 respectively.

In Seattle’s last four games, Alvin Kamara is the only #1 running back to not hit this number and that was because he had 51 rushing yards with 128 receiving yards. The others were Najee Harris (81), Darrell Henderson (82), Trey Sermon (89).

Thank you for checking out this new article series. I will recap these picks after all games are complete. As always, if you want to chat more in-depth about PrizePicks, join our Discord. You also get a 100% deposit match on PrizePicks when you use code HEAT, all while supporting RotoHeat.