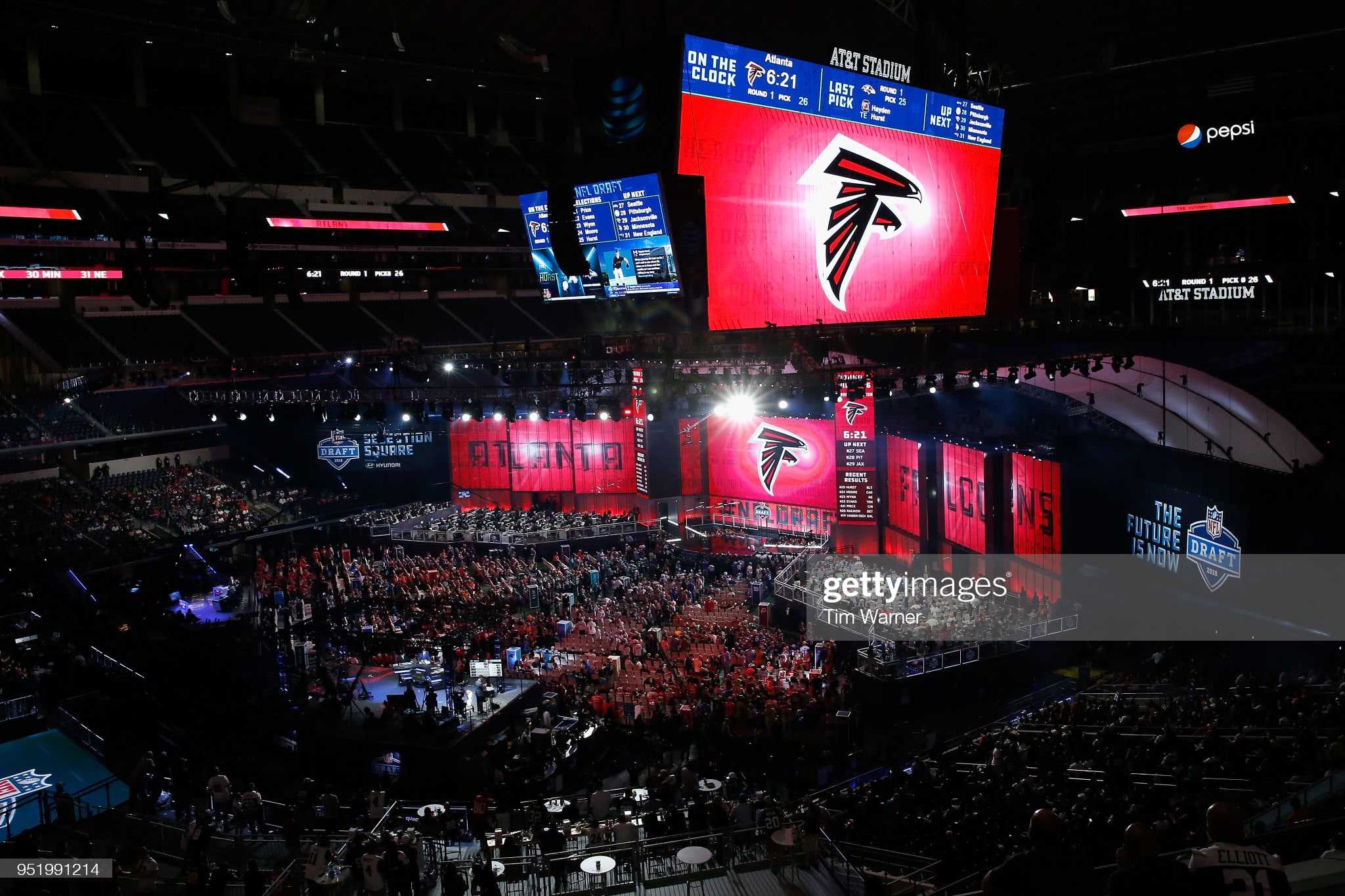 The NFL Draft is rapidly approaching, and whatever the Atlanta Falcons and new General Manager Terry Fontenot plan to do with the fourth overall selection could have a large impact on how the remainder of the first round and the remainder of the 2021 NFL draft plays out.

The first three selections are held by the Jacksonville Jaguars, New York Jets, and the San Francisco 49ers, respectively. The Jaguars are widely expected to select Clemson QB Trevor Lawrence to open the draft, and there is a nearly the equal amount of expectations that the New York Jets follow that pick by selecting BYU QB Zach Wilson with the second selection. As for the San Francisco 49ers, the question is which quarterback will they select at pick number three. The Niners at various points this offseason have been linked to quarterbacks – Matt Jones, Justin Fields, and Trey Lance.

The draft this season really starts with the Atlanta Falcons at pick No.4. The Falcons hold what could be the most valuable pick in the draft with nearly everyone mocking three quarterbacks being selected with the top three picks. The Falcons as a result have some juicy options.

If the Atlanta Falcons decide that Matt Ryan still has enough tread left on the tires, then trading back very well could be the best decision here. They have needs on the offensive line, throughout their defense, and there is talk about adding a tight end, a wide receiver, and a running back. Clearly the Falcons have more needs than they can fill with pick No. 4 alone.

The value on defense comes in the middle to late first round in the draft this year, so if addressing the defense is the top priority, then trading back with one of the perceived quarterback needy teams seems like the logical move. Moving down out of pick No.4 likely allows them to stay within the first round this year and it adds to their draft pick portfolio in later rounds this year and potentially into future years.

By accumulating additional future selections, they make it easier on themselves to fill all of thier holes and it also gives them the draft capital in year or two to move up if need be to select what they hope is the eventual replacement for Matt Ryan. Teams that would like to get into the top four reportedly are: Carolina, Denver, and New England. There is also an outside shot of Dallas moving up to No. 4 as well.

There are five quarterbacks thought to be coming off the board within the first round, all mentioned above. The talk on Twitter and in several media outlets is that Terry Fontenot would like to select their QB of the future, while new Head Coach Arthur Smith is said to want to continue for the foreseeable future with current QB Matt Ryan. The QB that the Falcons have been linked to is North Dakota State QB Trey Lance.

Ryan remains under contract through the end of the 2023 season, and moving on from him won’t be easy. Ryan carries a dead cap number of nearly $71 Million this season, and $40 Million in 2022 according to spotrac.com. Smith reportedly believes that Ryan has two or more years left. He has no real medical history, he hasn’t missed many games in his career, and there hasn’t been a big drop-off in his play. It will be interesting to see who win out here–coach or GM.

Atlanta could decide to address their offensive line needs and the most logical choice here would be to select Oregon OT Penei Sewell. If Arthur Smith plans to run the same offense that he ran in Tennessee, shoring up the O-Line will be critical. There are plenty that believe that Sewell is the most talented non-quarterback prospect option in the 2021 draft class. Selecting him here is not a reach and it is certainly not out of the question.

Sewell is athletic and powerful, and he has the ability to play anywhere along the offensive line if asked to do so. According to Atlanta’s current 2021 depth chart, they currently deploy Jake Matthews at left tackle and Kaleb McGarry at right tackle, which may cause a need to move Sewell to a guard position. Nevertheless, Sewell provides the Falcons with one of the draft’s most talented prospects and gives Smith and this coaching staff options when sorting out how to deploy their personnel along the offensive line.

Patrick Surtain II who is widely viewed as the top defensive back in this year’s draft class would be a welcomed addition to the Atlanta Falcons needy secondary. Surtain spent the last three seasons at Alabama where he served as the shutdown cornerback for the Crimson Tide.

During his career at Alabama, Surtain recorded 116 tackles, 24 pass deflections, four interceptions and four forced fumbles. His performance in the 2020 season earned him first-team Associated Press All-American and SEC Defensive Player of the Year honors.

Surtain II would pair nicely with 2020 first-round selection A.J. Terrell. Terrell was one of the best players on the defensive side of the ball in his rookie season. Securing the No. 2 cornerback spot will be a priority for Smith and Fontenot in their first off-season together. The Falcons finished last in the NFL in pass defense as they gave up 293.6 yards per game in the air in 2020.

The priority is there, but the timing is not. If the Falcons have Surtain II in their sights they need to trade back, add additional draft capital, and stay in a range within the middle of the first round that enables them to grab their man.

If the Atlanta Falcons decide to add to the wide receiver room with the 4th overall selection, they will have thier pick of the entire class. Currently, the top ranked option for them here appears to be LSU WR Ja’Marr Chase. Chase is a dominant WR who projects well to the next level.  He is an excellent route runner with good speed that enables him to gain separation.  While the ball is in the air he tracks it as well or better than any other WR in this class.

The selection of a wide receiver this early would indicate how the organization feels about franchise WR Julio Jones. Jones selected 6th overall back in 2011 has been a staple in this offense ever since. Julio enters the 2021 season at 32-years-old with a history of hamstring injuries that have hammered him throughout his Hall of Fame career. According to Sports Injury Predictor, Julio has eight hamstring injuries of various grades dating all the way back to his 2011 rookie campaign.

Chase, although worthy of the 4th overall selection, would be puzzling for Atlanta. They currently have a No.1 WR in the making under contract in Calvin Ridley and the need to add the Alpha WR may be a little premature.

Atlanta played more snaps in two-tight end sets than any other team in the NFL in 2020. Adding the player that I feel is the top non-quarterback prospect in this class to play alongside TE Hayden Hurst is certainly an option. There is little to no question that Kyle Pitts is a “grade A” talent, and his addition would add another high end pass-catching option for the offense moving forward while complementing Hurst. Pitts’ athletic ability likely removes the need for adding a WR early as we saw Pitts display the ability to line up all over the field in the Florida offense.

One notable concern with selecting Pitts at No. 4 pick is that the tight end position is certainly not their top priority. I listed all the needs earlier and tight end was one of the only spots I didn’t list. Making the selection of the best player available is a recommended strategy in dynasty rookie drafts, but it might not be the best idea for the Atlanta Falcons to ignore all their the areas of need to do so. The thoughts of an Atlanta offense led by Matt Ryan, with Julio Jones, Calvin Ridley and Kyle Pitts is mouthwatering for the fantasy community. Sadly, NFL executives rarely consider the fantasy community when building out their rosters.

Add to the Running Back Room

Atlanta waived RB Ito Smith and decided not to re-sign Gurley and 2017 5th round selection Brian Hill. The Falcons clearly have a need for additional running backs. With the 4th pick in the draft they have the option to pick any of this year’s top rated running backs.

Alabama’s Najee Harris and Clemson’s Travis Etienne top the list of this year’s class along with Javonte Williams out of North Carolina. Selecting a running back this high in the draft is risky and unnecessary. As noted above when discussing Kyle Pitts, drafting a TE at four is not their top priority and neither is selecting a running back. The Falcons should be looking for their next running back with their picks in the second, third, and maybe even fourth rounds. Pick 35 likely yields them one of the top of the trio motioned and waiting until pick 68, or 99 should still bring them a back capable of partnering with Mike Davis in the Falcons backfield.

So, on April 29th, sit back and enjoy the 2021 NFL draft. For all intents and purposes the draft starts with the Falcons on the clock with the fourth overall selection. How it plays out is anyone’s best guess.

Thank you for reading Atlanta Falcons Options at Pick 1.04