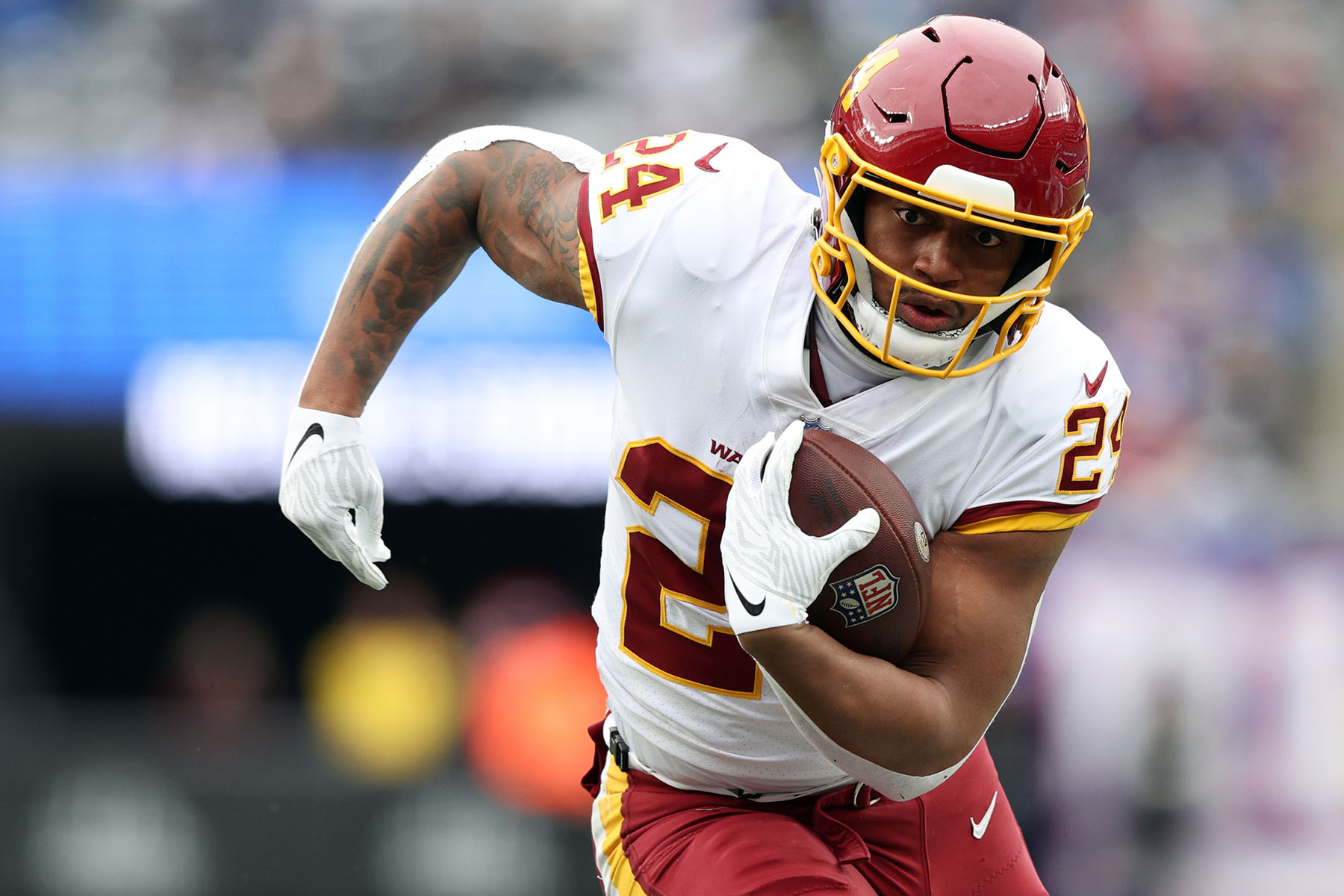 I signed up to write the Antonio Gibson Fantasy Outlook on Wednesday night. I had put some notes together but was very curious how tonight’s preseason usage would look before putting everything together.

Boy was I shocked.

Going into his 3rd NFL season, many people forget that Antonio Gibson was a college wide receiver, not a running back. Despite only have 44 receptions and 33 rushing attempts at Memphis, Gibson has a solid 6’0″ 228 lb frame and great speed – 4.39 40-yard dash – which led the Washington Commanders to draft him as a running back.

This was intriguing early on for many fantasy analysts and players. The thought was that the Antonio Gibson fantasy outlook was strong because of his pass-catching ability out of the backfield. It turns out that in his rookie season, J.D. McKissic would thrive as the pass-catcher out of the backfield for the Commanders, which baffled fantasy players everywhere.

Why haven’t they used him more in the passing game? Quite simply, he is at best an average receiver out of the backfield. He doesn’t stand out in any efficiency metrics and he has dropped nine, yes NINE, balls over the past two seasons.

That is a nearly 9.5% drop rate. To put that into perspective, Player Profiler’s best comp for him is Joe Mixon. We know Joe doesn’t get the number of targets that we wish he did, but he has only dropped 11 balls in 5 seasons, on 208 targets. Antonio Gibson has dropped 9 of 96 targets in his two seasons.

PAUSE FOR ONE SECOND – I AM HAVING JORDAN HOWARD FLASHBACKS

Dropping passes isn’t all that is troubling Gibson as he has also fumbled seven times in his two seasons. Joe Mixon has only fumbled six times in his five seasons.

It seems that Gibson has hand issues.

I said that I was shocked by what transpired in the Commander’s 2nd preseason game. As I just mentioned, fumbles have been a big issue for Gibson and it may be a way bigger issue than any of us thought heading into training camp. After a fumble in the first preseason game, there were already rumors that Brian Robinson Jr. could seriously eat into Gibson’s workload in 2022.

So, when tonight’s game started with Robinson Jr. taking the first handoff after Antonio Gibson returned the initial kickoff:

It became evident that the chatter may be coming true. Brian Robinson Jr. may actually be taking a significant amount of attempts, which greatly affects the Antonio Gibson fantasy outlook. While Gibson did feature well as a receiver – 3 receptions for 37 yards – it was with J.D. McKissic inactive. McKissic is someone that the Commanders covet very much and he is just a year removed from leading NFL running backs in targets with 110.

That leaves Gibson in a very peculiar spot for the 2022 fantasy season. He absolutely has standalone value as he will still get carries, but just HOW valuable is he?

According to Fantasy Pros ADP, Gibson is #40 overall. I was already passing on Antonio Gibson in the 4th round of drafts and honestly liked Miles Sanders more, who is 75th overall. Now, I would rather have Kenneth Walker III who is 88th overall and Rhamondre Stevenson who is 91st overall. This puts Gibson right about 95-100 overall for me in 1QB drafts. Slightly ahead of guys like Melvin Gordon III and Michael Carter, both who are in similar situations, with a more talented runner ahead of them (potentially), but who could see league-winning volume if anything were to happen to said RB.

Thank you for reading the Antonio Gibson fantasy outlook article. If you hate what I said, hit me up on Twitter, join our Discord or FB Community and let me hear it!