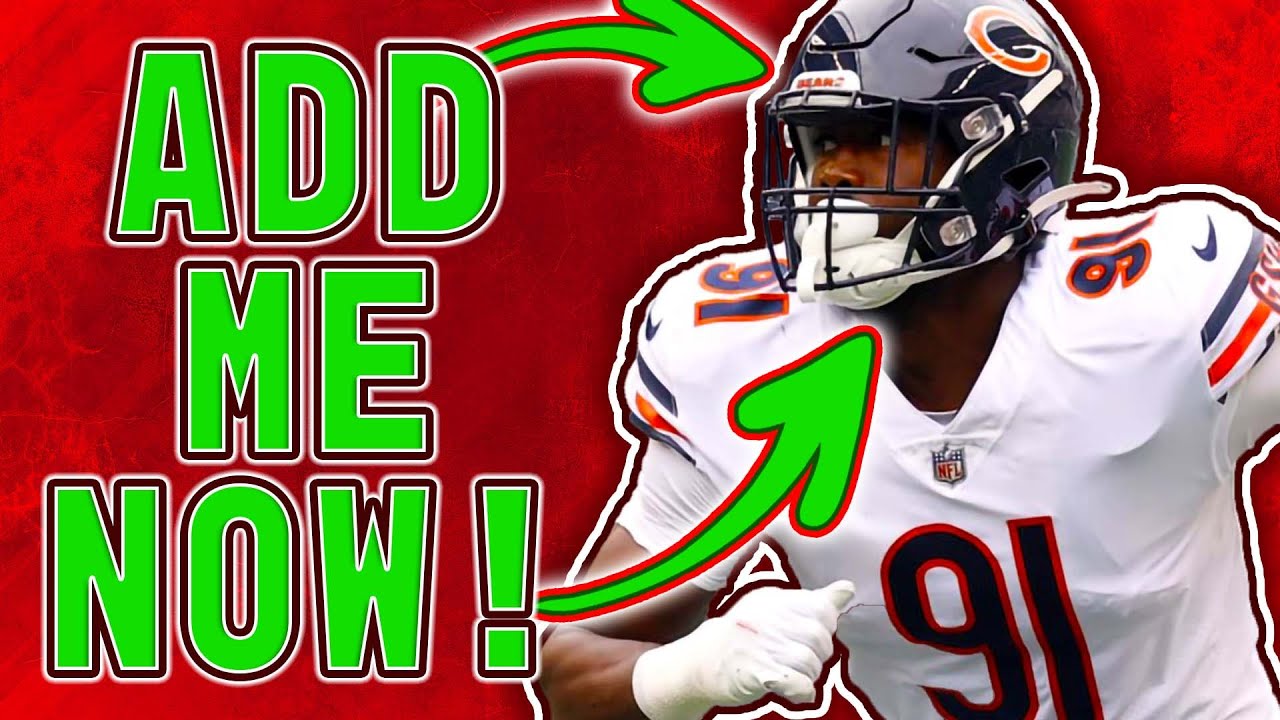 I may have spoken too soon before last week, as Week 3 brought on a bevy of IDP injuries. Justin Houston, Tracy Walker, Myles Garrett, Zaven Collins, DJ Jones, Baron Browning, Joey Bosa, Quincy Williams, Azeez Al-Shaair, are just a few of the names injured in Week 3. Naturally that can lead to open spots on your team, whether for starters or potential bench fill-ins, so let’s see who we have lined up for this week.

Zaire has been a standout fill-in for Shaquille Leonard next to Bobby Okereke for the Colts this year. In three games (with a 100% snap share) he has 22 solos, 8 assists, and 2 TFL this year. This is a top 30 linebacker in almost every format. If Zaire is not rostered he should be at this point just beware that we still do not know when Shaquille will be back. Just keep an eye out for this and don’t blow all your free agency acquisition dollars on him when Shaquille could be back this week, as he has been trending closer to playing each week for a while.

If you are in our Discord server or watched our shows this offseason, you know Austin (@Infamous_IDP) is our resident Rodriguez fan. As such I will let him give you the low down here:

If you’re in need of quality linebacker depth, look no further than rookie Malcolm Rodriguez. “Rodrigo”, as some now know him, was an All-American at Oklahoma State and he is making his presence felt early for the Lions. While Alex Anzalone has consistently enjoyed the highest snap share on the team, Rodriguez has seen his share steadily rising through three weeks (60%, 73%, 76%). He’s been given the opportunity and the results have followed: He had 6 combined tackles in Week 1, while delivering 8 combined tackles in each of the following two weeks. Depending on your scoring, Malcolm Rodriguez ranks inside the top 30 linebackers in fantasy points and ranks second among rookie linebackers, finishing only behind Devin Lloyd.

At this pace, it would not be surprising to see Rodrigo finish inside the top 30 LBs overall at the close of the season. Rodriguez already holds stand-alone value and he would carry tremendous upside in the event Anzalone misses time for any reason. He’s a must-add for dynasty leagues and he should be getting redraft consideration for 12-team leagues that start two or more linebackers.

With starting linebacker Willie Gay Jr (who had a 78.5% snap share through two games) suspended for four games, Darius Harris stepped into Willie’s role. In Week 3 Darius was bumped up to an 87% snap share and had 7 solos, 6 assists, and 1 TFL. Tampa Bay, Las Vegas, and Buffalo are the next three games for the Chiefs. I don’t expect him to have that high of a share each week with Gay out, but in the same role, Gay had 8 solos, 8 assists, 2 TFL, and 2 PD in the first two games, while Nick Bolton has continued to rack up the tackles. There is enough for two linebackers to be relevant in leagues where you start 3 or have an IDP flex, and while Gay is out Harris should be rostered.

Drue leads all Chargers linebackers this year with a 74.35% snap share on the year, 18 solos, 6 assists, 2 pass deflections, and 1 interception. Kenneth Murray is just not that guy, Kyle Van Noy is more of just a savvy veteran at this point, and Troy Reeder has barely played. Drue has shown himself to be the linebacker to have in this group, and while he isn’t a starter in leagues with just two starting linebackers, if you start three or more or a flex he has starting linebacker viability and should be rostered.

After being almost non-existent his rookie year, and barely playing safety for the little time he was on the field, Richie Grant has turned into a viable IDP asset in his second year. He has a 100% snap share on the year, with 13 solos, 10 assists, 3 pass deflections, and 1 interception, good for a top 15 safety on the year. The Atlanta offense has been better than expected which has led to more defensive passing game opportunities than many thought there would be. A promising player likely rostered in dynasty IDP leagues, Grant is worth an add in redraft.

A top 20 safety on the year, Brandon has outplayed the more heralded (and still good) Jevon Holland this year. In three games he has 14 solos, 10 assists, 2 pass deflections, 1 sack, and 1 forced fumble. Over half of his snaps have been along the defensive line or in the box, which is a great sign for a physical player who can rack up the tackles. You can see he is the most rostered player we have this week, but he is still available almost 2/3 of leagues on ESPN, and more elsewhere. Brandon is a weekly starter in most leagues at this point.

Despite drafting rookie safety Kyle Hamilton in the first round and signing Marcus Williams to a lucrative free agent deal, Chuck Clark keeps finding IDP viability. He has a 100% snap share on the year and has played 46% of his snaps on the line or in the box. With the still unresolved issues with linebackers for the Ravens, I do not see this changing much. A safe base floor of tackles is what I like to see in a back up or fill-in fantasy football safety, and the shootouts they are getting into in games will give him even more opportunity to rack up the tackles; he has 15 solos and 7 assists already on the year.

In cornerback required leagues Charvarius Ward is likely rostered and I believe the better play, but Moseley (99.45% snap share) is less rostered and has been on the field slightly more than Ward (98.34%). Mosely has 10 solos, 3 assists, and 2 TFL on the year, and Week 4 brings a Monday Night game against the Rams, who are in the top 3 in most points allowed to opposing cornerbacks. Mosely is in a great spot for success this week.

Jonathan Greenard and probably Jerry Hughes will get more attention from people, but Rasheem has had two nice weeks in a row after not playing Week 1:

Week 4 brings the Chargers who are in the top 10 in most points allowed to opposing defensive ends and just lost starting tackle Rashawn Slater for the year. I like Green to continue his quality play this year and increase his usage as well.

I am really only considering JPP if he has defensive line designation in your league; he has it in Sleeper and ESPN. He does not in Yahoo or FleaFlicker. MFL, your guess is as good as mine based on the position labeling you choose to you. Regardless he has signed with the Ravens, is healthy, and will likely be put to work right away. Odafe Oweh has one edge spot locked up on the Ravens, and Justin Houston had led the other spot with about a 64% snap share before being hurt in Week 3.

I am not saying he will get that right away, and facing Buffalo isn’t the best shot for production anyway, but Week 5 the Ravens face the Bengals and JPP should be ramped up a bit by then in a great matchup. Betting on proven talent for a spot start or bench spot addition can be a week-winning move in the future.

Dallas is still playing the Giants at the time of writing, but in that game Dorance already has 1 solo, 1 sack, 1 TFL, and 2 QB hits. That is to go with the 4 solos, 2 assists, 2 TFL, and 2 sacks on the year in the first two games. He has gotten more pressure, production, and has graded out better than Randy Gregory, the player he is replacing.

Dorance’s snap counts aren’t as high as I’d like, he is in the mid-40s due to Micah Parsons spending about the same amount of time on the edge opposite Demarcus Lawrence, but he is playing great and faces the Commanders in Week 4, who are giving up the most points to opposing defensive ends on the year.

Leading all Saints defensive tackles with a 62.56% snap share on the year, Shy has 9 solos, 9 assists, and half a sack so far this year. Nothing amazing, but quality for a player that is a free agent even in deep leagues. He faces a team in the top half of teams with points allowed to opposing defensive tackles (the Vikings) in Week 4 and offers a nice tackle floor which is what we want in a defensive tackle waiver add.

You catch our 2022 NFL Week 4 IDP Waiver Wire Adds and all our other video content on YouTube. Be sure to subscribe and click the notification bell to ensure that you don’t miss any of our other great content. We have free IDP Rankings over on RotoHeat.com, and you can catch our IDP-Specific podcast on most podcatchers! You can also find me on Twitter.