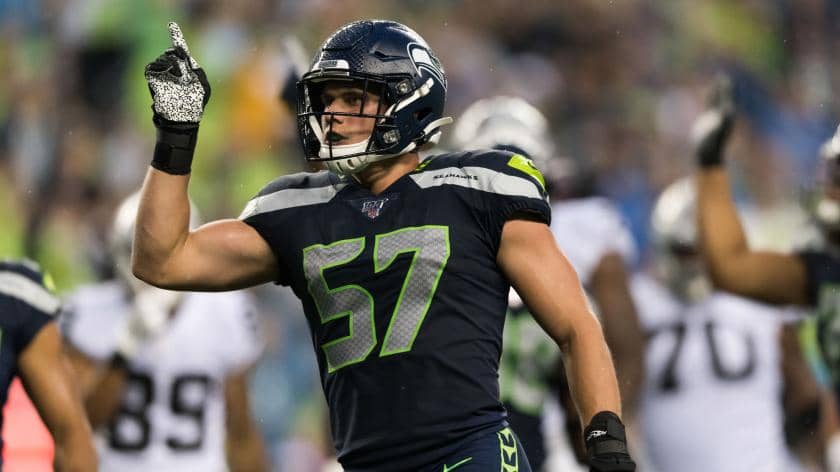 Lucky/unlucky 13 is upon us this week, so of course b,yes are back after a week off of them for Thanksgiving. I totally did not confuse the bye weeks last week with this week, so if you saw that, you were imagining things.

Speaking of Thanksgiving, I made a small dish of green bean casserole for myself, and cheesy potatoes that others actually enjoyed, the night before on a whim. This is always a good idea when you are totally stressed out from cleaning already and end up forgetting about lineups the next day. The lesson here is, don’t overload yourself with unneeded work if you already have too many fantasy football leagues to pay attention to.

Jaylon first played for the Giants in Week 4 this year and has played seven games for them overall, having a 70.13% snap share on the year. Over the past four games though that share moves up to 81.25%, and he has at least 5 combined tackles in each of those games. He also hit a 91% snap share last week against his former team, the Dallas Cowboys.

This week the Giants play the Commanders, who give up the 5th most points to opposing linebackers. It won’t be an exciting or sexy pick, but Jaylon should be good to get you tackles this week if you need him in your lead-up to the playoffs.

A preseason darling that has had ups and downs this year, Cody is the LB 17 in terms of solo tackles on the year, and 35th for assisted tackles. He is still getting what you want in a linebacker and should be much more rostered at this point in the year. Seattle faces off against the Rams of Los Angeles in Week 13. With Bryce Perkins at quarterback, the Rams had 28 runs against 24 passes (one by the punter). I expect the Rams and Seattle to both go run heavy in this game, which will keep Cody as a viable play this week.

Hold your nose at this snap share for the year, it is not pretty: 58.61%. And that is with playing in every game. Roberts is a throwback to the two-down thumpers. He is atrocious in coverage. That said we have had luck with similar guys the past few weeks (Singleton and Pratt) and the Dolphins play the 49ers in Week 13. All the overblown stories about past teams, revenge games, etc aside, the 49ers are 8th in points allowed to opposing linebackers. Roberts has one game with fewer than four combined tackles this year, so if you just need some tackles, he should work in a pinch.

This is only a viable flex or fill-in play if De’Vondre Campbell is out again. He only has a 65.5% snap share the past two weeks, but that is him serving as the second linebacker behind Quay Walker…not Isaiah McDuffie like in Week 2 when Isaiah had an 84% snap share. Regardless, over the past two weeks in this role Krys has 10 solos, 8 assists, and 1 sack. This week the Packers play the Bears, who give up the 3rd most points to opposing linebackers.

Rudy started over Darnell Savage this week, and Savage left the Sunday night game right at the start with a right foot injury and did not return. Savage had been playing over half his snaps as a slot corner the two weeks before this, and Rudy had a 64.5% snap share at safety the past two weeks.

In the start against Philadelphia, Rudy played well and had 6 solos, 3 assists, and 1 forced fumble. I suspect he will continue to start, and the Packers face the messy Chicago Bears this week. Being one of the NFL’s oldest rivalries I expect this to be a heated game either way with the Bears trying to show up like last week.

Chauncey Gardner-Johnson left the Sunday night Packers/Eagles game early with a ribs injury and did not return. Such injuries can be difficult to return quickly from, especially for a defensive back. If he sits, Reed is likely to get the start. The 2022 undrafted free agent had only played two defensive snaps this year before Sunday night, when he had 35 snaps (71% share). He ended with 3 solos, 3 assists, 1 pass deflection, and 1 interception.

A 2021 5th-round pick, Darrick has played in every game this year for Washington to the tune of a 73.75% snap share. Over the past three games he has a 100% snap share to go with 13 solos, 8 assists, 2 interceptions, 2 pass deflections, and 1 fumble recovery. In a game that people would’ve put you in a straight jacket for, if you told them before the season started that it would have serious playoff implications, the 7-5 Commanders take on the 7-4 Giants this week. The Giants allowed the 7th most points to opposing safeties on the year.

A 5th-round pick of the Cowboys this year, Daron has been getting playing time as the year has gone on. Over the first 7 games, he had a 13.14% snap share on defense to go with 4 solos, 1 interception, and 1 pass deflection.

Over the past 4 games, he has 14 solos, 3 assists, and 1 pass deflection to go with a 70.5% snap share. Week 13 has Dallas facing off with Indianapolis, and the Colts are 6th in points allowed to opposing cornerbacks. I like this spot for the improving rookie, who has done well as he has earned more playing time.

Ya’ll are still sleeping on a Giant here. He started the year off slow and got hurt, but over the past four games the Giants have had, Leonard has games of 8, 9, 4, and 6 combined tackles, with 3 TFL, and 1.5 sacks. Leonard is at least a DL 3, if not a DL 2, in most leagues. Week 13 has the Giants facing the Commanders, who are 6th in points allowed to opposing defensive ends. Pick him up and fire him up for this week, and the rest of the year.

Another NFC East defensive end which a way too low of a percentage of being rostered. Tied for 10th in solos tackles for defensive ends and tied for 26th in assists, he also has 9 TFL and 4.5 sacks. Week 13 has the Eagles facing off with the Titans, and the Titans are 4th in points allowed to defensive ends. Yes, the Eagles have a heavy rotation on their defensive line, but Josh has played in every Eagles game this year and leads their defensive ends with a 59.34% snap share. This is a great spot for him.

Dorance only has a 49.53% snap share on the year but he has been productive as a pure pass rusher when he is on the field. He has a sack in 6/11 games so far this year, to go with 7 TFL. Dallas plays Indianapolis this week, and the Colts are 8th in points allowed to defensive ends. With the way Dallas’ offense is clicking I expect the Colts will have to throw to keep up, which will create opportunities for Dorance to get to Matt Ryan. Be aware though, he does not offer much for tackle upside, with just 14 solos and 8 assists on the year.

I had a miss here last week. Shy Tuttle was the defensive tackle play for the Saints that worked, not David Onyemata. Sometimes you get the process right, but the player wrong.

Looking at this week, Ed Oliver has played well over the past four weeks. Check out these splits (the Bills had a bye Week 7 and he was out injured for a few games):

Week 13 has the Bills facing the Patriots, who are 8th in points allowed to opposing defensive ends. Ed is in a great spot to keep his hot streak alive.

You catch our video content on YouTube. Be sure to subscribe and click the notification bell to ensure that you don’t miss any of our other great content. We have free IDP Rankings over on RotoHeat.com, and you can catch our IDP-Specific podcast on most podcatchers! You can also find me on Twitter.