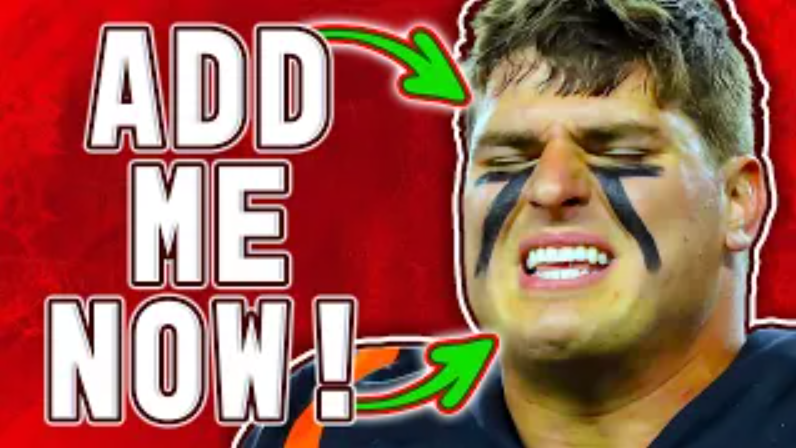 While I’d like to say that the Cowboys blowing out the Vikings made up for losing to the Packers, it doesn’t. But I will take a win before the short turnaround to face the banged-up Giants for some Thanksgiving football.

I’d like to take this time to state that turkey is overrated for Thanksgiving. It is fine. But it is nothing special, no matter how you cook it. Thanksgiving, in terms of food, is all about the sides. My palate has evolved over the years where I will try most sides presented at least once, but I will always have a soft spot for green bean casserole. Pumpkin pie is also fine, but really any dessert pie is awesome. Make sure you celebrate more than just pumpkins on Thanksgiving; they had their day on Halloween.

Breakout linebacker Pete Werner had ankle surgery the week of November 13th, and while they hope he will return yet this year Kaden has been filling in well for him. Kaden has had a 94% snap share the past two weeks and in those games he has had:

Kaden should continue to start for as long as Pete is out, and with games left yet this year against some run-favoring teams like the Falcons, Eagles, and Browns, Kaden has a chance to maintain flex or LB3 value.

I’d be he is not available in dynasty leagues unless it is super shallow, but he is apparently available in many redraft leagues. JOK missed Week 8 due to injury, the Browns had a bye for Week 9, and JOK missed Week 10 due to injury as well. He returned this week against Buffalo to have a linebacker high 95% snap share to go with 7 solos, 5 assists, and 1 TFL. The Browns play the Buccaneers in Week 12, and Tampa Bay is middle of the road in points allowed to linebackers, but JOK’s ability to go out and cover will help keep him on the field if the Buccaneers go pass-heavy. Now finally healthy again, JOK is a quality add in most leagues if available.

This is a bit of an odd one, but as we get closer to the end of the regular (fantasy) season for most teams, with byes still going on, sometimes we just need to get points where we can. If there is something Alex does, it is get tackles. In the 6 games the Broncos have played from Week 6 on (their bye was Week 9) he has had 25 solos, 19 assists, on a 66.17% snap share. Oh and I excluded Week 6 when calculating that. Yes, I left a game out. You know, the game where he had 19 solos and 2 assists.

So even leaving that out, he is getting you 5 solos and 4 assists a game. No, it isn’t a pretty snap share and he is second fiddle to Josey Jewell. But the Broncos’ offensive ineptitude has allowed other teams to run the ball a lot and let both middle linebackers here eat. I don’t see any reason that would not continue the rest of the season.

Germaine is actually a name my wife rejected that I liked for our son. Regardless of that, this Germaine is usually removed on passing downs, which makes it even more impressive in that he has at least a 64% snap share in all but one game this year, and in those games where he has had at least a 64% snap share he has had at least 5 combined tackles in every game. In Week 12 the Bengals play the Titans, and we know they love to run the ball with Derrick Henry, especially with it getting colder. Last week the Packers top two linebackers each had 12 combined tackles against the Titans. Pratt feels like a lock to continue his tackle streak.

Yes, he is probably too high to be listed here, but he should be a lot higher. Jeremy returned in Week 11 after a 6 game absence on IR to have a 100% snap share to go with 7 solos and 3 assists. Chinn is a weekly starter in most leagues, but with many redraft leagues not having IR spots, he may be available on waivers. If so he is a priority add.

Another baffling rostership percentage. Since Week 6 he has not gone under 5 combined tackles. He also has a 100% snap share in every game he has been healthy, which is every game but one on the year. The Packers face the Eagles in Week 12, and the Eagles give up the 4th most points to opposing safeties.

Jordan has at least 4 combined tackles in all but one game this year and has a 99.26% snap share on the year. The Bears give up the 9th most points to opposing safeties on the year. Jordan is not an exciting pick-up, but he will give you a safe floor of tackles that is valuable in a bye week or injury replacement add. Out of the safeties listed, Whitehead is third in order of preference for me.

Rookie Tariq Woolen has gotten a lot of buzz this year, and rightfully so, for his cornerback play. For IDP purposes though, Mike Jackson has been better in balanced and tackle heavy leagues.

Seattle returns from their bye after playing in Germany in Week 10, and they face the Raiders in Week 12. The Raiders are 9th in points allowed to opposing cornerbacks. This week at cornerback, I like Mike.

This is a deep one if you are looking for a deep play. He only has a 25.04% snap share on the year, but he has been very productive in limited time as of late. Over the past four games he has at least three combined tackles each game, and he has a sack in two of them. I do not expect the sacks to necessarily continue this week, but the Jets’ Week 12 opponent, the Bears, run the ball a lot and are in the top 10 in points allowed to defensive ends. Even with the rotation he is in if you are desperate for some defensive end help this week, Clemons is worth looking at in what I expect to be a very run-heavy game for both sides.

Trey’s rostership has gone down over the course of this year interestingly. He is on pace for more combined and solo tackles, but fewer TFLs and sacks. He has at least a half sack or 1 TFL in 6 of 10 games this year, and at least 3 combined tackles in 5 of 10 games. Week 12 has the Bengals facing the Titans, and the Titans are 3rd in points allowed to opposing defensive ends. The lack of rostership is curious regardless, but this a great spot for Trey.

This will be a new name to many. Abdullah has played a lot more over the past two weeks and that looks to continue with Ta’Quon Graham carted off with a knee injury on Sunday. Graham had a 65.2% snap share on the year before being injured. Over the first 8 games he played, Abdullah had a 28.95% snap share.

Over the past two weeks, Abdullah’s snap share is 48.25%, and during those weeks he has 3 solos, 6 assists, 1 TFL, and 1 sack. In Week 12 the Falcons play the Commanders, who are 6th in points allowed to opposing defensive ends. I like the spot here for Abdullah in deeper leagues.

Going back to the well of relatively productive players in a good spot. The 49ers play the Saints in Week 12 and the 49ers are in the top 5 in points allowed to opposing defensive tackles. David has a 58.70% snap share on the year, and he has at least 3 combined tackles in 5/11 games this year. He has improved his play over the past four weeks as well, with 8 solos, 4 assists, 3 sacks, and 3 TFL during that time. He’s got a great shot to continue his recent hot streak in terms of tackles and TFLs this week.

You catch our 2022 NFL Week 12 IDP Waiver Wire Adds and all our other video content on YouTube. Be sure to subscribe and click the notification bell to ensure that you don’t miss any of our other great content. We have free IDP Rankings over on RotoHeat.com, and you can catch our IDP-Specific podcast on most podcatchers! You can also find me on Twitter.