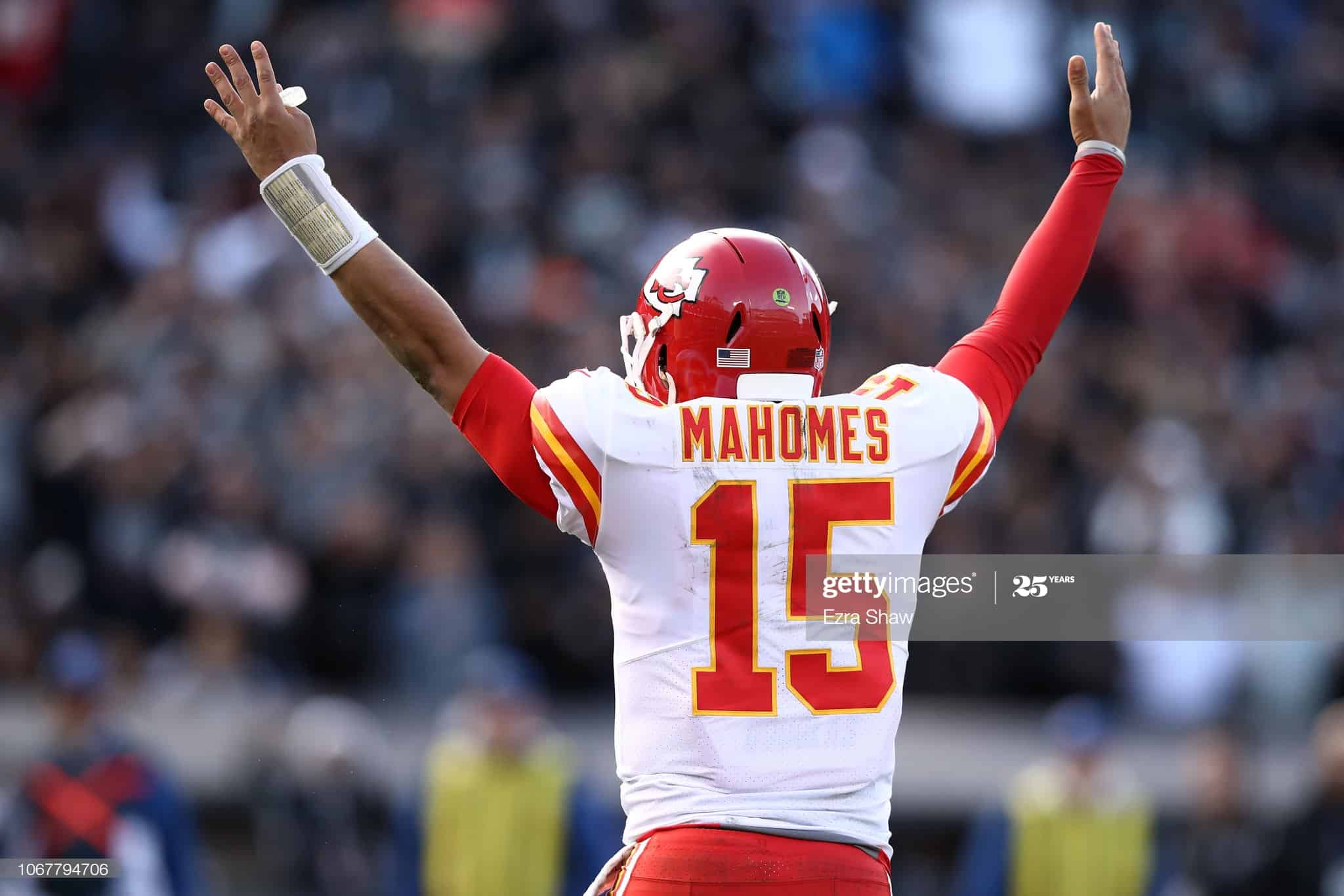 Of all the positions to rank, quarterback remains the most difficult. If given enough time, I can make a compelling argument for 20-23 of the league’s starting quarterbacks to be top-12 fantasy options. The position on a week-to-week basis is somewhat predictable, but on a season long landscape it is likely the most inconsistent.

Adding to the complexity of ranking quarterbacks, the position has never been deeper. Rookies are coming out of college prepared to play at a relevant level never seen before, and there are more dual-threat QBs and high-volume passers than ever before as well.

While everyone would prefer to roster the elite fantasy football quarterbacks, it’s important to know that you don’t have to. The quarterback position is more exciting than ever with all the dual-threat guys under center, and my preseason fantasy QB rankings reflect that. Here are top ranked quarterbacks entering 2021.

Patrick Mahomes is still considered by most to be fantasy’s safest and best quarterback, which is why he’ll be the first one from his position off the board on Draft Day. He topped 22 points in 12 of 15 matchups and should at least be expected for that many points weekly with the upside to wreck your opponents a handful of times. In a 17 game season, with a revamped offensive line and weapons like Travis Kelce, Tyreek Hill, and Clyde Edwards-Helaire, don’t be surprised if Mahomes challenges his 2018 totals of 5,097 yards and 50 touchdowns.

Josh Allen broke out in a big way last season and finished the season as the top overall scoring QB with 405.06 fantasy points. Allen recorded not only his first 300+ passing yard game of his career, but he also topped 400 passing yards twice. The biggest improvement in his game was his accuracy. Allen completed 69.2% of his passes, higher than his previous two seasons, and any of his seasons at Wyoming.

Fortunately for his fantasy managers, Allen continued to use his legs with his third season in a row of at least 400 rushing yards and eight touchdowns. He’s a dual-threat quarterback in a pass-happy offense, and he should continue to post dominant stats. If anyone can take down Patrick Mahomes this season, Allen is it.

Lamar Jackson blew the fantasy world away in 2019 during his MVP season. Despite taking a step back in 2020, Lamar Jackson remains in consideration to be the second quarterback off the board and should be drafted as a top-five option in all formats. He reminded us all of his upside in the final four games of 2020, averaging more than 28 fantasy points and 86 rushing yards per game.

The additions of Rashod Bateman, Tylan Wallace and Sammy Watkins makes this the best wide receiver corps Jackson has ever played with and gives him additional upside as a passer. If Lamar can elevate his passing game and maintain his elite rushing stats, he is destined for a top-3 finish in 2021.

Kyler Murray rode a modest improvement in passing and a massive jump in his rushing production to propel him to huge weekly numbers, averaging 29.2 points per game until he hurt his shoulder in Week 11. At the end of Week 11, Kyler sat atop the QB scoring standings. After the injury, Kyler ran less and averaged 16.51 points a game the rest of the way.

Kyler will still run in 2021, but the additions of James Conner, AJ Green and Rondale Moore lead me to believe it will be a reduced amount. A favorable schedule outside of the NFC West will help keep Kyler in the top-4 in 2021.

If you want to get an idea of how good Dak Prescott can be this season, go back to last year and look at his fantasy points per game. Prescott was No. 1 in that category among all quarterbacks at 27.73. He was rolling until suffering a season-ending ankle injury in Week 5. Dak, currently nursing a shoulder injury, dropped down from three to five. He’s expected to be fine for the start of the regular season, but until we know for sure, this is where he will be ranked.

Prescott should thrive in a full season with Amari Cooper, CeeDee Lamb, Michael Gallup, Ezekiel Elliott and Blake Jarwin. I like Dak as a top-five fantasy quarterback this season, and it wouldn’t surprise me if healthy for 17 games that he is in the running for No. 1 overall.

Justin Herbert made a lot of fantasy managers very happy in 2020 with his record breaking rookie campaign. Herbert entered 2020 with little to no expectations and as the Chargers back-up QB. What a difference a season can make, as he certainly has expectations now. Herbert was great last year all things considered. He averaged 22.95 fantasy points per game with some great week-to-week consistency and in 2021 he could be even better.

Herbert’s 5.2% passing touchdown rate ranked 14th, and his 18% bad-throw rate ranked 12th. In addition, he averaged just 3.7 rush attempts per game. Elevating his standings in those categories would catapult him from “really good” to “great.” With new Offensive Coordinator Joe Lombardi in house, a rebuilt offensive line, and 17 games with Austin Ekeler, Herbert is certainly setup for success in 2021.

The QB position is so deep that Russell Wilson is my seventh ranked QB. It feels too low, because it probably is. 2020 was a tale of two seasons in terms of fantasy production for Wilson and the members of his offense. In the first eight weeks of the season, Russ sat atop the QB fantasy scoring standings with 212.04 fantasy points (30.29/game). In the final eight weeks he dipped to QB11 and his average points per game fell to 17.86. If Seattle lets Russ “cook” for 17 games, it’s very possible the Rick Butts Hot Take comes true.

This one might surprise some and be seen as a little ridiculous. Every season we seem to have a QB emerge as a fantasy breakout. In 2018 it was Matt Ryan and his QB2 overall finish. In 2019 it was Lamar Jackson, and a season ago it was Justin Herbert. In 2021, that QB will be Jalen Hurts. Hurts scored 19, 22 and 26 fantasy points in his first three starts against New Orleans, Arizona and Dallas, and he was on pace for 4,517 passing yards, 27 touchdowns and 11 interceptions, as well as 1,269 rushing yards and five touchdowns over 16 games.

Clearly he won’t maintain that pace over a full 17 game season, but I do see him becoming the third QB in NFL history to rush for 1,000 yards in a single season. If Hurts can develop some chemistry with his pass catchers and maintain average passing stats, this ranking is likely too low.

Aaron Rodgers had some fun with us all this off-season, and to the dismay of this Vikings fan he is back in Green Bay for another season. After two subpar seasons (by his standards) in 2018 and 2019, Rodgers exploded in 2020 with some of the best statistics of his career. I expect regression in 2021 which is baked into this ranking.

Rodgers’ 9.1% touchdown rate (on a career high 48 TD passes) was nearly 50% higher than his career rate, which means you should expect his touchdown passes to regress near his career average of 35 a season. In addition, his 8.2 yards per attempt was his highest since 2011, so the yardage total likely comes down a little as well. I am not saying that Rodgers is a bad bet as a fantasy starter; it’s in fact the opposite. All I am saying is you shouldn’t draft him expecting a repeat of his 2020 MVP season.

Tom Brady finished the 2020 season as the QB8 a season ago. Blessed with the best weapons of his 21-year career, Brady averaged 21.87 fantasy points a game. Brady gets all of his weapons back in 2021 and will get a full season from WR Antonio Brown. Brady finished with a 30:8 TD to INT ratio over his final 11 games (including the playoffs), showing that he has plenty of tread on his age 44 tires. Oh, and he did all of this last season on a torn MCL. If Brady could run, he would have a shot at being a top-5 QB in 2021.