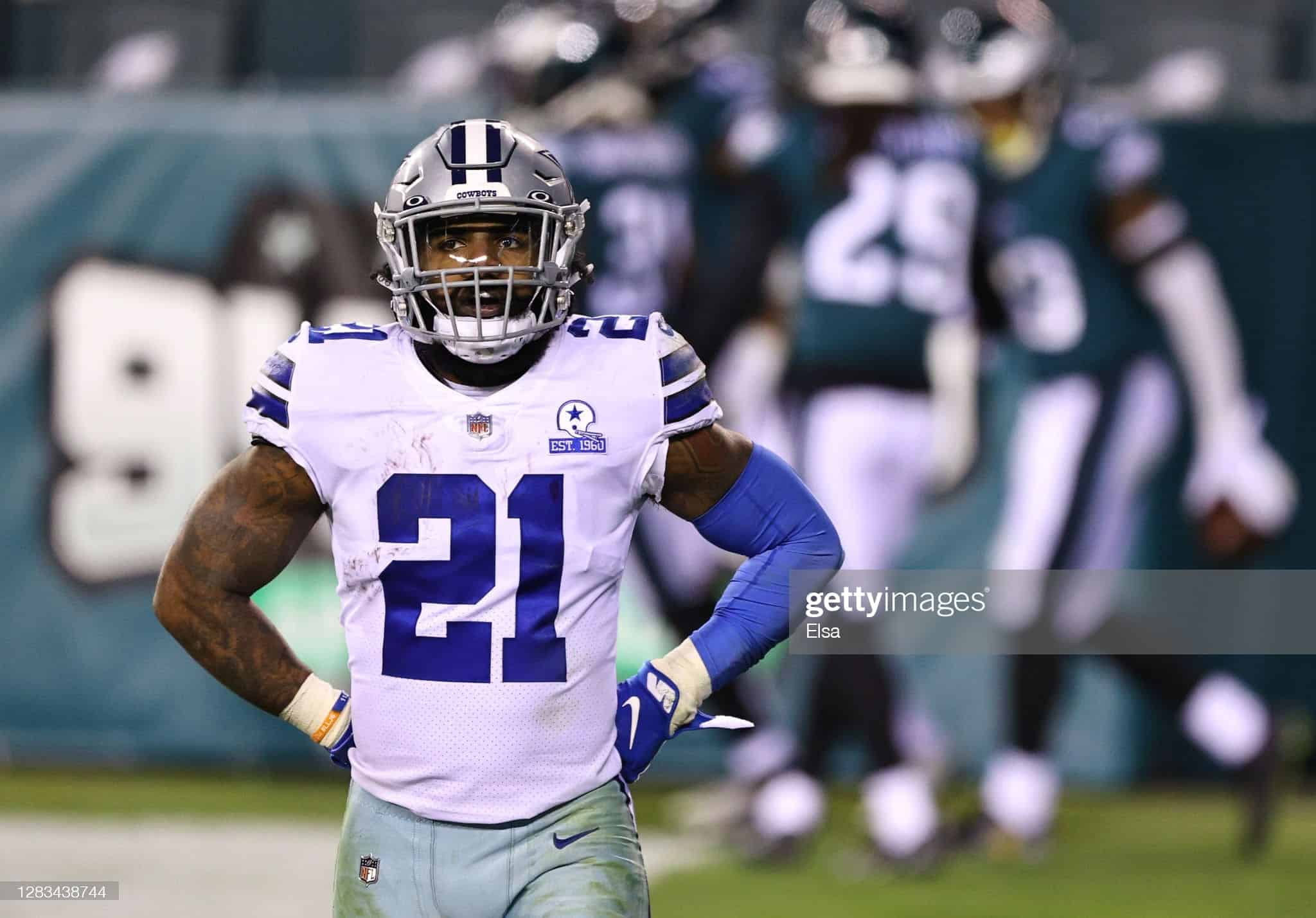 All dynasty managers crave RBs like Christian McCaffrey, Saquon Barkley, and Johnathan Taylor on their dynasty rosters, and rightfully so. All of these elite RBs require a first round pick in a Superflex startup. If you draft like I do and you prefer to grab a QB in round one, and even in round two, you will need to find your backs later in the draft. If you are looking for value, look no further than the following four RBs based on their current ranking and ADP from our friends at DLF.

Last season in Weeks 6 though 17, Dallas Cowboys RB Ezekiel Elliott was the 26th highest scoring running back in PPR scoring with 84 fantasy points. As a result, the fantasy community as a collective unit downgraded Elliott, and his value plummeted.

There is no disputing that Ezekiel Elliott’s season was disappointing. Despite playing 15 games, he failed to rush for over 1,000 yards. In addition, he fumbled six times, losing five of them. His average of 4.0 yards per carry in 2020 was a career-low, as were his eight total touchdowns. Despite all the thresholds that Zeke failed to reach, he finished the season as RB9 with 223.7 PPR points in 15 games.

When quarterback Dak Prescott went down with season-ending leg injury in Week 5, the Cowboys’ offense went down with him. Andy Dalton started nine games, and when he missed tim,e Ben DiNucci and Garrett Gilbert each started a game. Elliott, in the 5 games with Dak Prescott, was RB3, and without Dak he slumped to RB24. An injury-thinned Cowboys’ offensive line really hurt Elliott, too.

2020 was the fifth consecutive season in which Elliott finished as a top-12 running back. There have been 233 running backs drafted since 2010, and Elliott joins Alvin Kamara and Jonathan Taylor as the only running backs to deliver a top-12 season every season in which they have played. Kamara has appeared in four and Taylor had his rookie season a year ago.

The opportunity to grab a consistent RB1 producing back in 4th round of my Superflex start-up is an opportunity that I will not allow to pass me by. The level to which Zeke has fallen is ridiculously low.

Kareem Hunt finished the 2020 season as RB10 with 218.5 PPR points. It was the 3rd time since being drafting in 2017 that he has accomplished a top-12 RB fantasy season. The only season he failed to hit the mark was 2019, a season in which he finished as RB47 with 101.4 points. Hunt started the 2019 season serving an eight game suspension and didn’t make his debut until Week 10.

Hunt started his career in Kansas City after being selected in the third round of the 2017 draft. He was signed by Cleveland after being released by the Chiefs for an off-field incident that led to his suspension in 2019. Upon joining the Browns, Hunt also joined a backfield with RB Nick Chubb. Chubb is the primary running back for the Browns, and he was RB17 as a rookie, RB8 in 2019, and RB11 in 2020 in only 12 games. It’s the presence of Chubb in Cleveland that caps the fantasy ceiling of Kareem Hunt, at least that is the perception.

In 2019 after serving his suspension, Hunt averaged 16.68 points per game. In those same eight games, Chubb averaged 12.98. In 2020, Nick Chubb was injured in Week 4 and we got a look at what Kareem Hunt can do with this backfield to himself. In Weeks 5-8, Kareem Hunt was the 11th highest scoring running back averaging 13.6 PPR points a game and he totaled 54.5 points in those four weeks.

The thought that Kareem Hunt is only viable in the Browns offense when Chubb is absent is a myth. In fact they have played together 20 times since Hunt’s suspension was served in 2019. In those 20 contests, Nick Chubb has averaged 15.76 points and Kareem Hunt has averaged 13.27. In those 20 games, Hunt finished as a top-12 RB three times and a top-24 RB another 12 times. 15 times in 20 games (75%), in which both Hunt and Chubb dressed, Hunt gave you starting running back value.

Hunt being valued at RB24 and being drafted in the 6th round is a great value add, and a back that I am targeting at this price in all my Superflex start-ups.

Building off his 2018 season, Mike Davis was signed by the Chicago Bears to fill a hole in their backfield after Jordan Howard departed for Philadelphia. 2019 didn’t quite work out as planned for Mike Davis as the Bears drafted David Montgomery that same offseason. Davis was traded to Carolina after seven games in Chicago and finished his season with 11.9 points and a RB110 finish. Entering 2020, Davis was way down the depth chart battling with Reggie Bonnafon for a backup role and carried no fantasy value at all.

After franchise running back Christian McCaffrey went down with injury, Davis stepped in and stepped up. From weeks three through eight, Davis was the RB4 averaging 17.3 PPR points a game. CMC was back in week nine, but Davis was back in the starting role for the remainder of the season from weeks 10 through 16. He cooled down the final stretch finishing as RB18 in those six games. All in all, Mike Davis went from fantasy irrelevant to a top-12 RB season in 2020, wrapping up the season with 206.5 PPR points in 15 games.

Do I think Mike Davis is a top-12 fantast RB talent? No, I do not, but what he is is the perfect back for the zero RB drafting fantasy manager. Despite how you may feel about Davis, there is no denying that he is a starting RB in an Arthur Smith led offense in Atlanta. As the Falcons are currently constructed, Davis leads a backfield with Qadree Ollison, Tony Brooks-James and Javian Hawkins. Ollison and Brooks-James have combined for 64 career carries in 22 combined games and Javian Hawkins is a rookie. No matter how you dissect this Falcons attack, Mike Davis in round 8 is a value add.

AJ Dillon is an interesting fantasy asset. It all starts for Dillion when he was selected in the second round of the 2020 NFL draft by the Green Bay Packers with pick 62nd overall selection. Fantasy managers are not alone in terms of reaching in a draft, as the Green Bay Packers showed NFL teams do it as well. The Packers not only reached in round one selecting QB Jordan Love, they doubled down by reaching for Dillon–a back they didn’t need–in the second round as well.

Dillon joined RBs Aaron Jones, and Jamaal Williams, and as one would have projected, Dillon was the third back on the depth chart. At the end of Week 8, he had a total of 24 touches and was sitting as the RB94 in PPR scoring. Dillon landed on the Covid- 19 list for the next five weeks, and was held without a touch upon his return in Week 13. Fast forward to Week 16 and a snowy Sunday night at Lambeau Field. Dillion finished the night with 21 carries for 124 yards with two touchdowns. He added in a catch for an additional 5 yards. AJ finished as the 6th highest scoring back in Week 16, with 25.9 PPR points, 74% of his 2020 total.

When the Green Bay Packers opted not to apply the franchise tag to Aaron Jones, it was widely viewed as Jones’ departure from Green Bay, via free agency. As a result, Dillon’s ADP soared, his January Superflex ADP was 84th overall and was RB23. Jamaal Williams was also a free agent at the time and the path to the lead back role was wide open. Jones surprised us all and re-signed with the Packers for 4 years and $48 million. Interestingly enough the franchise tag would have cost Green Bay $8.4 million if applied to Jones.

Dillon’s ADP started to decline as it became evident that Jones would remain the Packers lead back. Williams, on the other hand, left and joined the Detroit Lions. Dillon saw his ADP fall to RB26 in February, and now sits at RB38 in May. As a result of the free fall, Dillon has gone from overdrafted to overvalued to undervalued in a little over a year.

Aaron Jones and Jamaal Williams entered the league together in 2017. Career to date, Jones has 782 touches and Williams has 622. The Packers backfield was spilt during their 4 years together and it will remain split in 2021 and likely beyond. Aaron Jones’ career high in touches came in 2019 with 285, and he followed that with 248 a season ago in 14 games. AJ Dillon will see work, and a considerable more amount of work than your typical backup running back. Williams averaged 156 touches a season as a Packer, and I believe that AJ Dillon is a better running back than Williams. As a result he is value for me at RB38 in the 10th round.

Thank you for reading 2021 Dynasty Value Adds Running Back