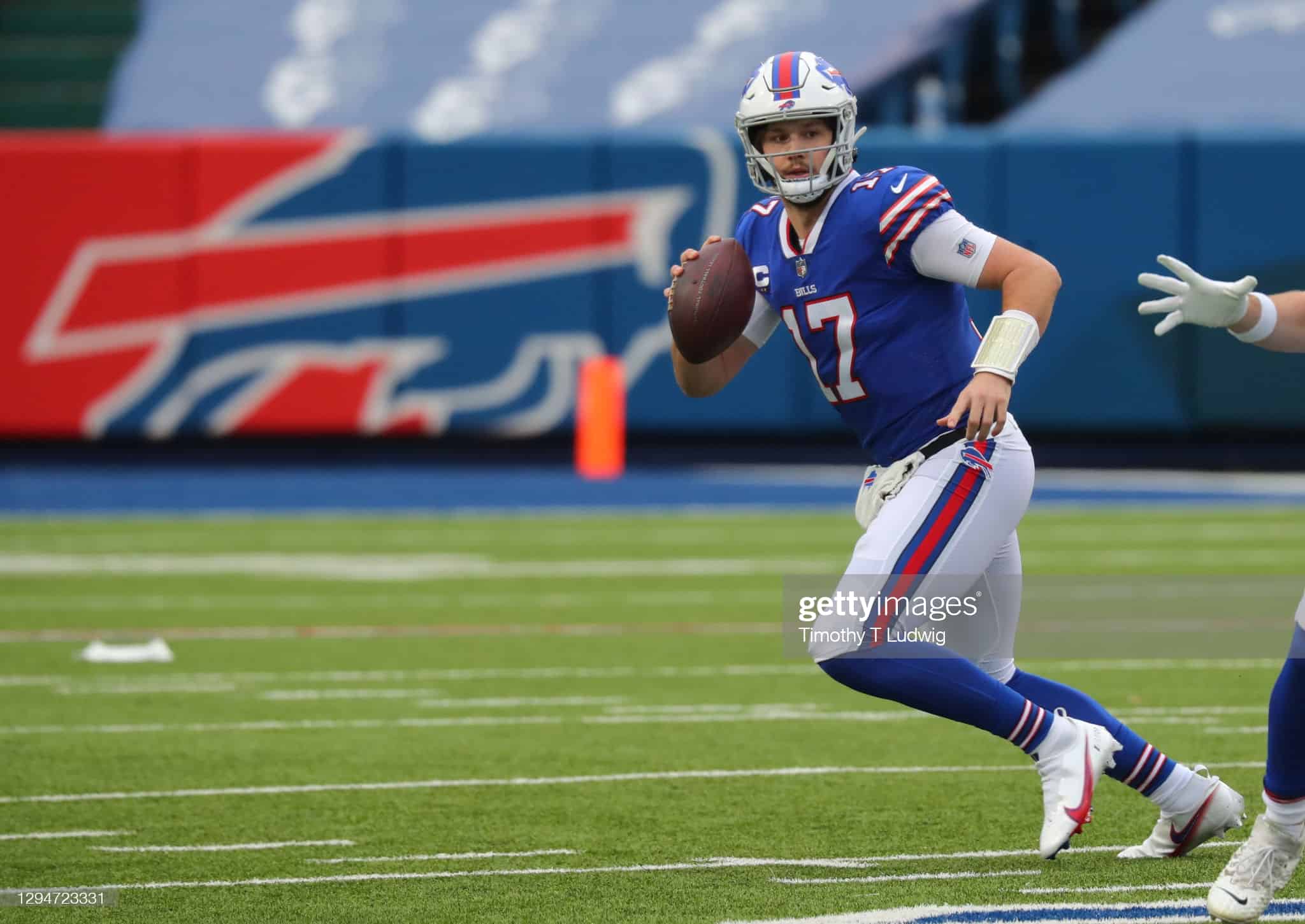 In this episode I am kicking off a four-part series, recapping the fantasy season.  Each episode will cover one of the four skill positions.  Episode 1 kicks it off at the Quarterback position.

The first of my 2020 Fantasy Football QB Awards is the MVP. My MVP could have gone to one of three quarterbacks, Josh Allen, Patrick Mahomes or Aaron Rodgers.  In the end I selected Allen.  Josh Allen entered the season with an average of 220 completions on 391 attempts for 2582 yards with 15 touchdowns and 11 interceptions.  His completion percentage was 56.2%.

Well in 2020, Allen completed 396 of his 572 passes, 69.2%, an increase over his previous 2 seasons average of 13%.  That is insane and unheard of.  He threw for a Bills record 4544 yards and added 37 touchdown passes and tossed 10 picks.  He finishes the fantasy season with 405.06 points the only QB to eclipse 400 this season.  Josh Allen vastly exceeded my expectations this season and he finishes the year as my Fantasy MVP.

The first of my 2020 Fantasy Football QB Awards is the ROY. Unlike the MVP, this one was a no-brainer.  As soon as Joe Burrow went down with a season ending knee injury this race was over, and it was likely over before the injury.  Herbert finished the season as QB9 with 342.84 points in 15 games played.  His average points per game landed him at QB7 for all QBs that appeared in 6 or more contests.

He isn’t just the best rookie QB in 2020, he is one of the best of all-time.  Herbert winds up with six rookie records, including: Total touchdowns (36), passing touchdowns (31), completions (396), 300-yard passing efforts (eight), multi-touchdown passing games (10) and three-score days (six). Herbert fell 39 yards shy of the rookie passing yardage record. He was remarkably consistent throughout the season.  His only true dud of a game was in Week 13, a 6.46-point performance against the New England Patriots.  Back that game out and he averaged 24.03 points in his other 14 games.

Herbert will be drafted as a top-10 QB in 2021 and he should be.  I am interested to see who the Chargers hire as their next Head Coach after parting ways with Anthony Lynn.  I am betting that whomever they hire will have a plan for Justin Herbert and the Chargers potent offense.

Third up in my The first of my 2020 Fantasy Football QB Awards is the Comeback Player of the year award. Comeback Player of the year might be an odd title to give Arron Rodgers.  He will be the league MVO this season and rightfully so.  Even as a Vikings fan I can not deny the face he is the MVP. He gets my CBP award simply due to the fact he finished last season as QB10 averaging 17.65 points per game.

This award could have gone to Ben Roethlisberger, simply because he missed all put a half of 2019 due to injury, but hey, Aaron Rodgers deserves recognition for what he accomplished in 2020.

When the Packers surprisingly selected Jordan Love in the first round of the draft, the writing appeared to be on the wall for Rodgers in Green Bay. Umm, not so fast.  Rogers increased his completions by 19, his yardage by 297, his touchdowns by 22, and he threw 43 fewer passes.  Rodgers increased his TD rate (percentage of touchdowns/pass attempt) to 9.1% vs the 4.6% in 2019.

If that isn’t enough the 48 passing touchdowns were a career high, and 2 more than JK Scott had punts.  In 2013 when Peyton manning thew 55 touchdowns passes the Broncos Britton Colquitt punted 62 times.  I have never seen a QB throw more TD passes than his team had punts in a season.

I ranked Aaron Rodgers at 12 in my preseason rankings.  He ended up at QB3 with 387.26 points 104.88 more than a season ago and a ridiculous 6.56 points a game.  Call him MVP, Comeback Player of the Year whatever you decide, Aaron Rodgers deserves all the credit he gets this offseason, and maybe more.

Next up in the 2020 Fantasy Football QB Awards is the Breakout QB of the Year. Many will say that last season was Ryan Tannehill’s breakout season, and I am not sure I would put up much of an argument other than he wasn’t the Titans starter for the complete season like he was in 2020.

Tannehill entered the season as the consensus QB21, so it is safe to say that many including myself saw regression coming in 2020 and a significant amount at that.

In 2019 Tannehill finished with 2742 passing yards and 22 touchdowns in 12 games.  In 2020 in all 16 games, he threw for 3819 yards and 33 touchdowns.  In 4 more games he threw just one more interception. He increased his passing yards by 10 yards per game and 1.14TDs per game.  The yardage increase was minimal to say the least, the increase of more than a touchdown pass per game certainly is not.

Tannehill finished the season as QB7 with 350.36 points.  His 21.50 points per game were 2.32 points per game more than his 19.18 2019 season.  Most importantly he has established himself as a legit QB1 and is a QB that will certainly be drafted next season.

The last of my 2020 Fantasy Football QB Awards is the one that nobody wants to win, the Bust of the year. Carson Wentz had a rough 2020 season,  he lost the majority of his offense line, his confidence and his job.  His 12 starts in 2020 were the second fewest in his career.  In 2017 he started 11 games and in 2018 he started 13.  Both of those seasons were cut short by injury, his 2020 season was cut short due to his erratic play.

I was higher than most on Drew Lock the year he entered the NFL, and I clearly remain higher on Drew Lock after is disappointing 2020 campaign.

Lock appeared in 5 games in his rookie season and he averaged 14.20 fantasy points a game.  He was a rookie and he looked like one.  He entered 2020 with a new Offensive Coordinator in Pat Shurmur, and with two new weapons on offense, first round WR Jerry Jeudy and second round KJ Hamler.  The Broncos also added veteran RB Melvin Gordon via free agency.

In 2020 Lock appeared in 13 games and averaged 15.20 points per game a marginal increase over his abbreviated rookie season.  He wasn’t good, he made poor decision after poor decisions with the football and threw 15 interceptions in those 13 games.

So why is Drew Lock my QB to buy this offseason?  Well, there are a few reasons.

1. Courtland Sutton is will be back as the alfa WR and draw plenty of attention in the process.  This makes life easier for Jerry Jeudy, KJ Hamler and Noah Fant who will be entering his 3rd NFL season.

2. Pat Shurmur god willing will get an offseason program with this team.  Shurmur is not a good head coach but he has proven to be a solid OC mainly in Minnesota.  During those seasons in Minnesota, he got the career best years out of Sam Bradford and Case Keenum.

3. He will be dirt cheap to acquire.  Buying fantasy assets at a discount that have upside is what it is all about.

In 2020 Cousins exceeded expectations in fantasy and real life.  He entered the season as the consensus QB22 and ended the season as QB11. Cousins in the process, threw for the third most yards in a season in his career with 4265, and a career best 35 touchdowns.  All of this on a run first team.

The problem the Vikings ran into this season was as a run first team with a horrific defense, you quickly discover you can’t keep up running the ball when the other team is lighting up the scoreboard.  Minnesota had no choice but to throw, and Cousins attempted 516 passes, 72 or 4.5 more than in 2019.

The Vikings defense will improve in 2021, its hard to imagine that it wont.  As long as Mike Zimmer is running the show, running the football will be what his intent is.  The Vikings will have their 6th different OC in the last 7 years.  The candidate that the Vikings hire will follow the beat of the drum of his Head Coach or he won’t get the job.

Cousins is certainly going to regress, its time to sell while his value is at its peak.

That’s going to do it for today’s episode, thank you for tuning in for my 2020 Fantasy Football QB Awards

In our next episode I will run threw running back position.  Happy New Year Heat Seekers take care.